The Daily Maddie And Reality

When the announcement came yesterday that the Metropolitan Police was opening a formal investigation into the abduction of little Madeleine McCann from an apartment in the Algarve resort of Praia da Luz some six years ago, nobody who knows the workings of the appallingly downmarket Daily Express was in any doubt what would be on the paper’s front page today. 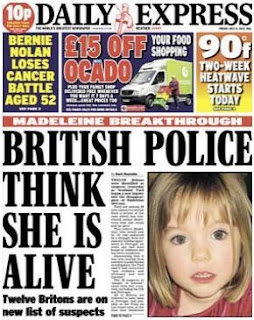 And so it came to pass: “British Police Think She Is Alive” screams the headline, demonstrating the towering ineptitude of Richard “Dirty” Desmond’s dwindling band of increasingly poorly paid hacks. There is no such thing as a “British Police Force”. The decision to proceed has been taken by the Met, which is responsible for policing in London. This may be because of Young Dave’s previous intervention in the case.

The Express has, additionally, run a piece without a name on the by-line titled “Landmark moment in the tireless search for Madeleine McCann”, using an old photo of parents Kate and Gerry to give the impression that they may have spoken to Dirty Des’ finest, which they have not. The McCanns have not, as far as is known, spoken to any other paper’s hacks, either.

Because what the Express is not telling its readers is that the McCanns took that paper, and the rest of the Desmond rabble, to the cleaners over a whole series of blatantly defamatory and wholly untrue shock horror stories between 2007 and 2008. Not only did Dirty Des and his pals have to stump up both sides’ legal fees, they also paid over half a million notes in damages.

Then, on top of all that, all the titles concerned published front page apologies. Why should that denote a particular level of seriousness? Ah well. The front page, for any editor, is sacrosanct. For any part of it to be dictated by anyone else is the ultimate loss of editorial control. This is why much of the Fourth Estate is so hostile to properly independent press regulation, which could specify front page corrections.

And another thing that the Express, and the rest of the papers pretending to have the ear of the McCanns, finds too inconvenient to relate is that Kate and Gerry are unswerving supporters not merely of improved press regulation, but specifically of the Hacked Off campaign. They were there at the Leveson presentation last November, along with other victims of press intrusion.

So remember, whenever you see another Madeleine McCann story roll off the tabloid production line, that the family have not spoken to whoever wrote the story, they were not consulted about it beforehand, and the photos are from stock and often several years old. Of course Kate and Gerry McCann welcome the Police investigation – the constant press intrusion is, however, something else.


What you will not read in any part of the tabloid press this morning.

[UPDATE1 6 July 1220 hours: such is the desperation of Dirty Des' hacks, the story of the Police investigation has led the Express for a second day, and with an even more ridiculous assertion. 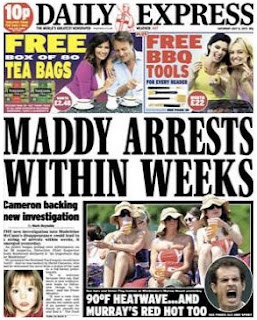 "Maddy Arrests Within Weeks" is the message to the dwindling band of readers, and as with so many Express headlines, it is not supported by the supporting text: "It is believed action could be taken before the end of the summer". So something could happen by the end of next month, but then again, it might not.

Meanwhile, the Dacre hackery at the Mail has already shown that the line it will take is to kick the Portuguese authorities: the headline "Why SHOULD we help find Maddie, ask Portugal's Police chiefs as they ridicule Scotland Yard claims of new leads on missing girl" tells you all you need to know.

What the law enforcement authorities in Portugal have actually said is - to no surprise - rather different, and if there is one thing that has annoyed them, and the Portuguese public, over this case is the utterly wicked behaviour of the British press, which mainly means papers like the Express and Mail.

Moreover, neither of these rags has been talking to Kate and Gerry McCann, not least because they wouldn't give the assembled hacks the time of day]

[UPDATE2 7 July 1305 hours: the story has led the Express for a third day in a row, demonstrating not only Dirty Des' continuing obsession with it, but also that his papers are so cheap and nasty that they have to wring every drop of advantage from whatever they can get their hands on for free. 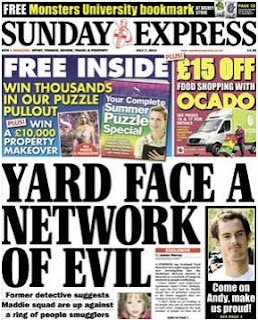 "Yard Face A Network Of Evil" rants the headline, which, as usual, is not supported by the actual story. A former Police officer has "suggested" that the investigation is "focused on a network of suspects involved in people trafficking". Except he doesn't actually know this.

And, once again, it has to be stressed that neither the Express, nor any of the other rags still trying to extract marginal circulation benefits from this story, have so much as approached the McCanns. They just have to cope with the barrage of false hope and uncaring hackery.

Meanwhile, the Express' "expert" "believes that old-fashioned Police work will crack this most baffling of cases". Hardly worth the phone call, was it, Express people?]
Posted by Tim Fenton at 13:06

Express have their Crystal Ball tuned in again for Saturday 6 July. Can't wait to read your piece!