That politicians are occasionally less than totally honest is not news. But for one of their number to reach the level of flagrant and knowing dishonesty displayed by one occasional Tory and MEP certainly is. Yesterday, in a clumsy Twitter intervention, our old friend Dan, Dan The Oratory Man attempted to pull off an act of projection in the debate over the NHS. In doing so, he let the cat out of the bag. 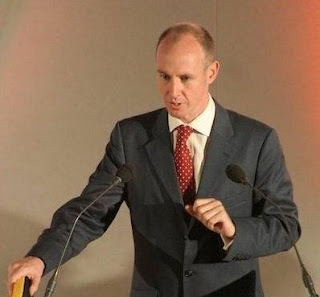 Hannan waded in after I had mentioned his lack of honesty when appearing on Fox News Channel (fair and balanced my arse) with professional loudmouth Sean Hannity. “Yeah, you’re right. The NHS Is The Envy Of The World” he sneered. Had I made that assertion? Sadly for Dan, no I hadn’t, and you will not find such a claim anywhere in the Zelo Street archive. 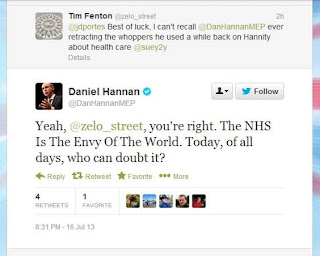 Is the projection and dishonesty just an isolated occurrence? No it isn’t: here we return to his now legendary appearance with Hannity. The stage is set by the Fox host telling viewers that universal health care systems, as used in the UK and Canada, are “not pretty”, demonstrating the true validity of the strapline “fair and balanced”. Then Hannan reels off the whoppers.


“I’m a friend of this country” says Dan, thereby suggesting that anyone of differing view is not. Then he talks of “this massive state takeover of health care”, which the Obama reforms are not (PolitiFact made this its “lie of the year” for 2010). His confidence buoyed, Hannan then quips that the UK is “maybe a couple of years behind Zimbabwe” (after asserting that we are “bankrupt”).

The NHS is described as a “relic” before the next porkie: “the power of life and death in a state bureaucracy”, this being the “death panels” line which PolitiFact made its “lie of the year” in 2009. And he’s not finished: after Hannity states that the NHS was “not going to provide life saving medication to women with advanced breast cancer” (not true), Hannan agrees this is a “death sentence”.

If anyone purchases their own treatment outside the NHS, Hannan asserts, the NHS will then “cut off” any treatment they were providing. That’s another seriously dishonest one. And all that was reeled off in around three minutes, with a completely straight face (there were later whoppers too, like suggesting the NHS was like North Korea). Instead, the US health care model was asserted to be close to ideal.

This required Hannity to tell that people were travelling from the UK to the USA for emergency surgery (yeah, right), and also from Canada and France (if in doubt, Fox hosts can always kick the French). Hannan nods along, and wilfully exaggerates NHS waiting list times. He knows he is being dishonest. Yet he keeps on with the whoppers. And taxpayers are paying him to do it.


The warmth generated by those blazing trousers could be useful in winter, though.
Posted by Tim Fenton at 11:03

And let's face it, nothing too vital will get scorched down there, will it?

'Yet he keeps on with the whoppers. And taxpayers are paying him to do it.'

- Half right. In fact Dan enjoys the patronage of Tea Party lobby groups such as Regular Folks United and American Legislative Exchange Council. The latter of course having a great interest in dissing the NHS to support their corporate health insurance clients in the US