There is, out there on the right, a new and deeply unsavoury convocation of polecats at work. But this time, it is not shilling for Michael “Oiky” Gove, but for that part of the Tory Party and its supporters that despises the NHS. Its two most visible poster boys are the Telegraph’s Will Heaven, and an old Zelo Street favourite, the odious flannelled fool Henry Cole, tame gofer at the Guido Fawkes blog.

The target for this less than upstanding duo is shadow health spokesman Andy Burnham, whose supposedly heinous crime is that he was Health Secretary in the last days of Pa Broon’s Government. Clearly Burnham is possessed of superhuman powers, as he supposedly fouled up the NHS and murdered thousands of patients in less than a year – or, more likely, he isn’t, because he didn’t. 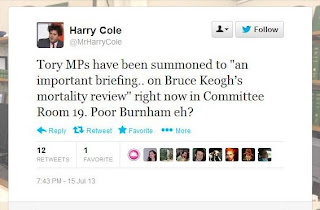 More of those non-existent "sources", eh?

Both Heaven and Cole have been softening up their respective audiences ahead of the report from the Keogh review, which is due today. And, to no surprise, neither has bothered taking any notice of Keogh’s own response to the “13,000 deaths” claim – “not my calculations, not my views” – but instead, taking numbers generated from using Hospital Standardised Mortality Ratios (HSMRs). 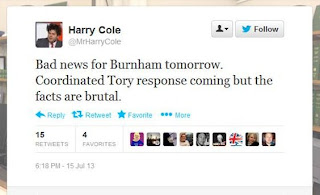 And we’ve been here before: as the Health Service Journal (HSJ) has pointed out, “The numbers cannot be related to actual individual deaths but are statistical estimates only and cannot be used to describe avoidable or unnecessary deaths”. Roy Lilley says of the Tel’s “13,000 deaths” headline “It's wrong, and based on what I can only assume is a deliberate misunderstanding of HSMRs”. 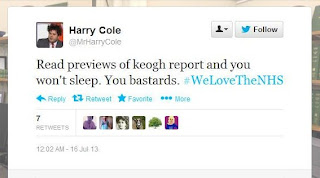 So what use are HSMRs? HSJ again: “Robert Francis QC, chairman of the public inquiry into failings at Mid Staffordshire Foundation Trust, described HSMRs as a warning sign, an indicator of potential concern”. Roy Lilley: “[Brian Jarman] says they are a sign-post, where we should look for poor quality care. He is usually right”. That warning sign is being deliberately and viciously misrepresented. 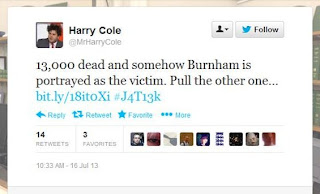 ... and methodologies he doesn't understand

Anyone not keen on the v-word should consider the Guido Fawkes blog’s use of Burnham’s face juxtaposed with a field of tombstones, along, naturally, with unflinching assertion of “13,000 dead”. This is characteristic of Cole’s ability to smear without conscience, and without knowing what on earth he is talking about. All is needed is to repeat the lie long and loud in the hope that the mud sticks.

Why should the cat-calling be quite so shrill? Ah well. The Times has today let slip that those shilling for folks to go private have good reason for such behaviour: the proportion opting out of the NHS is at a 20-year low, with the 2002 figure of 12.8% having declined by 2012 to 10.8%. Were the NHS to be staffed by killers patrolling the wards and emptying Uzis into vulnerable patients, this would not be the case.


These two clowns manage not to notice an awful lot. I doubt that it is a coincidence.
Posted by Tim Fenton at 12:39