Murdoch Hacks Piss Down Their Legs

Lyndon Johnson’s tendency to scatological humour was typified by his observation “Did y’ever think ... that making a speech on ee-conomics is a lot like pissing down your leg? It seems hot to you, but it never does to anyone else”. The quotation is well known, but its meaning has not been taken on board by Rupe’s downmarket troops at the Super Soaraway Currant Bun.

Had the Murdoch hackery taken heed of that pronouncement by the 36th President of the United States, they might have thought twice before running their cheap, nasty – and ultimately ineffective – attack on Mil The Younger and a number of other Labour MPs, part of whose funding for staff and office space comes from Trades Unions, “How the reds fund Ed” (originality not their strong suit right now).

This is accompanied by a group photo which is annotated so as to suggest that the Labour Party is personally in hock to Len McCluskey (the idea that Union General Secretaries might be other than Stalinist dictators is not allowed to enter). Here, MPs’ total donations are shown, then those received from Unite. The use of red to show total donations and blue for Unite is characteristically fraudulent. 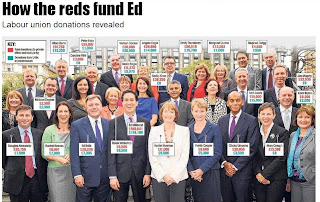 Moreover, readers will soon pick up on three failings in this photo: four of the MPs (Caroline Flint, Sadiq Khan, Jim Murphy and Mary Creagh) receive no money from Unite at all, six more (Peter Hain, Margaret Curran, Stephen Twigg, Liam Byrne, Chuka Umunna and “Auguste” Balls) get a quarter or less of their donations from Unite, and seven others are for some reason not identified.

This last looks all the more glaring, as two of the seven are the easily spotted figures of Tom Watson and Tessa Jowell. So even before considering whether their audience will be receptive to union bashing, on the pretext of the alleged selection packing at Falkirk – no Police action is being taken – the Murdoch faithful have shot themselves in their generously remunerated feet.

Many others, even if they fail to see through the dodgy and selective figures on the photo, will know that the histories of the Trades Unions and the Labour Party are linked, that the money for staff and campaigning has to come from somewhere, and manage a brief “Meh” before heading for the sleb goss and the sports news. And some will note that Labour, at least, makes the numbers known.

Where the dosh comes from to bankroll Young Dave’s jolly good chaps is another matter entirely. And that’s without the murky finances of all those Astroturf lobby groups out there on the right. Rupert Murdoch might not like to admit it, but even Sun readers are savvy enough to know that they are being sold a propaganda pup, however hot it might seem to his hacks.

The floor at Fortress Wapping must be a bit wet right now. No change there, then.
Posted by Tim Fenton at 14:46