Those of us of A Certain Age can still remember Monty Python’s Flying Circus, although hardly had it entered the public consciousness than the team disbanded. The subsequent hiatus in comedy shows that were popular, yet gained cult status, was broken by Not The Nine O’Clock News, which brought fame to Mel Smith, who has sadly passed at the all too young age of just 60. 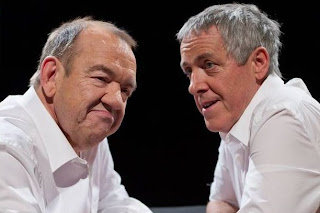 Mel and Griff: making us laugh

Yes, some of his former colleagues mentioned that Smith had not been in the best of health of late, but that kind of thing is personal, and cannot detract from the body of work that he contributed to, first with the NTNOCN team and then as half of the Alas Smith And Jones partnership with Griff Rhys Jones. The two of them then brought on more comedic talent, and more well known shows.


Memorable moments: where to start? Smith and Pamela Stephenson discussing football hooliganism, with Griff sending up BBC frontman of the time Hugh Scully (“Huge Scullery”), with the payoff line “Cut off their goolies” (above) has to be near the top, and Mel and Griff not playing darts (below) but drinking their way to 501 milligrams of alcohol, is another classic.


That is the kind of thing that fans of classic comedy will remember. But it is not enough for the Mail On Sunday: “Troubled comedy genius is dead at 60: Gout, two stomach ulcers and 50-a-day Nurofen Plus addiction... The dark health secrets of multi-millionaire Mel Smith”. Yes, we have to be envious because he made a lot of money. And the inmates of Northcliffe House wonder why they’re disliked.

Mail people, not only do your readers not need to have that rammed down their throat, they also don’t want it. We can understand that those who devote so much of their lives to making us laugh might be flawed. The genre is chock full of greats who also had to deal with addictive personalities. It goes with the territory. But that doesn’t mean rubbing our noses in it the moment they die.

Instead, check out John Lloyd’s warm tribute in Independent Voices, or the Guardian’s more conventional obituary, to see how it should be done. The MoS has gained no friends with its shameless attempt to kick the dead just to sell a few more copies, and many Mail Online commenters have expressed their disgust at the piece. But the Mail titles don’t say sorry.


After all, the subject of the hatchet job is dead, so that’s all right, then.
Posted by Tim Fenton at 13:33

Great piece, as usual. Humans are flawed. Unless their flaws expose them as hyprocrites, leave them alone.

They're not interested in making friends Tim, they just want to generate hits to their website if only for the outraged to vent their spleen or for the Mailtard to opine that Mel was fat and unfunny. The Mail takes cynicism to a whole new level.