Another day, another opportunity for the perpetually thirsty Paul Staines and his rabble at the Guido Fawkes blog to spin away in support of their paymasters, fail to do their research first, and as a result fall flat on their faces without the need to visit the rub-a-dub and get themselves Elephants’ Trunk and Mozart beforehand. Their latest own goal has come over Rupert Murdoch. 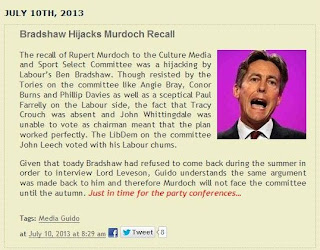 Rupe has been invited – a US citizen cannot be summoned – to appear before the Department of Culture, Media and Sport (DCMS) Committee, after the revelations contained in the covert recording made during a meeting with Sun staffers led to the Met deciding that one or more offences may have been committed as a result. The recording is being made available to the Police.

But the Fawkes blog, as part of its selling out to the Fourth Estate, is in the pay of the Murdoch empire, and so can be expected to spin dutifully on its behalf. And so it came to pass: this morning, a largely fictitious post appeared on the Fawkes blog titled “Bradshaw Hijacks Murdoch Recall”. Yes, somehow, despite there being ten other MPs on the DCMS committee, it was Ben Wot Done It. All by himself.

This is, of course, total crap, as is the rest of the characteristically lame spin: the move to invite Murdoch was “resisted by the Tories on the committee like Angie Bray, Conor Burns and Phillip Davies as well as a sceptical Paul Farrelly on the Labour side”. Resisted so forcefully that none of those named bothered to post on their Twitter feeds about it, such was their concern. 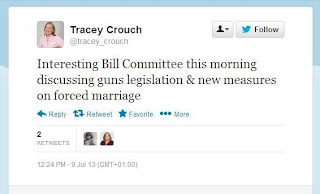 Interesting kind of absence there ...

And, as the man said, there’s more: “Tracy [sic] Crouch was absent” asserts The Great Guido. Not according to her Twitter feed, she wasn’t: Ms Crouch was reporting on a Bill Committee meeting just before 1230 hours. Moreover, the language used by the Fawkes folks, calling Bradshaw a “toady”, means he must be “toadying” to or for someone else. One cannot be a “toady” and remain independent.

Here, we get to the real reason for the Fawkes intervention: Ben Bradshaw has given the press establishment a hard time in the past, exposing their Royal Charter as a sham and a blatant attempt to impose a Mark 2 PCC. And that is why The Great Guido has singled him out to dump on for the invitation to Rupert Murdoch to appear before the DCMS Committee again.

But that still fails to explain for whom Bradshaw is a “toady”, unlike the Fawkes blog, whose vomit-inducing toadying to their new paymaster is all too clear. So, after they’ve explained to the kettle what colour the pot is, they can show how one MP manages to drive an 11 person Committee all by himself.


That will make for the most interesting of reading. Another fine mess, once again.
Posted by Tim Fenton at 10:43