It Was 75 Years Ago Today

Although there is a safety culture on the railways that would put the vast majority of road users to shame, there is also an appetite for record breaking. Nowadays, as with the Virgin Pendolino run from Glasgow to London in under four hours, speed limits are strictly observed, as are signalling restrictions. It was rather different in the 1930s, when speed records meant valuable publicity. 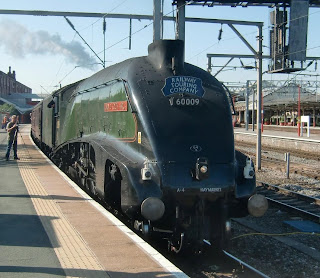 That publicity was always useful to the London and North Eastern Railway, which had gone from being reasonably comfortable financially to relatively poor in 1925, when Winshton, then Chancellor of the Exchequer, made his infamous mistake, putting Sterling back on the Gold Standard at the 1914 exchange rate. This increased the price of exports by 10% and many customers went elsewhere.

So the LNER’s streamlined express trains, introduced in 1935 with the Silver Jubilee, running between Newcastle-upon-Tyne and London, brought the publicity of high speeds, along with useful income from business travellers, who for the first time could visit their London offices, get useful work done, and do the round trip the same day. This set the speed record at 113mph.

The rival London, Midland and Scottish (LMS), launching their Coronation Scot streamliner in 1937, also decided to try for a speed record, and as I noted recently, this almost came to grief on the southern approach to Crewe after driver Tom Clarke left his brake application late. This raised the bar to 114mph. The LNER’s Chief Mechanical Engineer Nigel Gresley looked to better that the following year.

Brand new A4 class streamliner Mallard (Gresley bred wild birds and ducks) was chosen for the record attempt. She had been fitted with a double chimney and double blastpipe, after Gresley, looking at the LMS’ speed attempt, had become convinced that the single chimney throttled the exhaust at higher speeds. A “brake test” was arranged for July 3, 1938.

Before setting off, all the press were told of the real nature of the “brake test” and given the opportunity to leave the train. None did. Driver Joe Duddington, who wore his cap back to front for the occasion, coaxed Mallard to well over 120mph on the downhill from Stoke Tunnel (south of Grantham). The – very briefly recorded – top speed was 126. But this was rather different to doing that speed nowadays.

The run was over jointed track, some of which had not been replaced for two decades. The riding of the lightweight coaches would have literally been a white-knuckle ride: walking up and down the train at those record speeds would have been extremely difficult. But it is a record that has not been broken in the 75 years since. As railways have long ago moved on from steam traction, it will remain unbroken.


You can see Mallard and her five surviving sisters at the NRM for the next fortnight.
Posted by Tim Fenton at 17:49

The problem here Tim is you are demonstrating why Britain is losing ground in fields where we used to be king.

We've spent the last 75 years saying how clever we were to get and keep the record. But it wasn't because we were clever, it was because the competition had already realised steam was obsolete so weren't interested in competing, Europe was too busy electrifying and the Yanks were into big diesels. Likewise, we've spent 40 years saying how clever we are to hold the world record for diesel trains - when the rest of Europe says why bother with diesel? We made a big fuss in 1987 of breaking our own record and getting 148mph out of a diesel in a one-off special test - 6 years after the French had introduced 170mph electrics into regular, timetabled service.

The real record we hold is for the length of time it takes to catch them up. It's a few weeks off 32 years since they started TGV service - it will be another 13 before the planned start of HS2. So at the DfTs best estimate we will be 45 years BEHIND them - and even that is in doubt. Can you imagine what cars we would be driving or planes we would be flying in if those modes of transport were 45 years behind?