End Of The Life Of Brian

The appearance within the ranks of UKIP of disgraced Cheshire East Councillor Brian Silvester was covered recently by Political Scrapbook – for which my thanks to Laurence Durnan for getting his coverage out of the Westminster bubble – but there is rather more to this than at first meets the eye. Silvester was one of the great survivors of local Conservative politics – until his recent conviction. 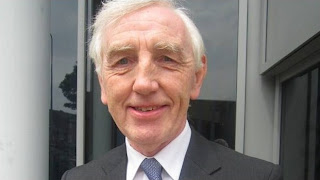 Old Brian knew how to play the local Government power game, but this also attracted an increasing number of enemies. When he stood against Gwyneth Dunwoody in 1992, some of the normally staunch Tory farming community could not get enough Labour posters and sign boards. He craftily stole the Crewe and Nantwich “war memorial” Council election, but at a price. 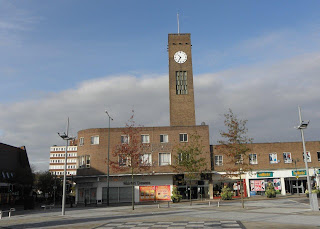 Market Square, Crewe: the war memorial used to stand where the checkerboard paving in the foreground can be seen

Crewe’s war memorial, a standing figure of Britannia, was removed from its old spot in Market Square. There was some highly righteous opposition. Silvester promised that, if the Tories were elected, the move would be reconsidered. They just scraped a majority. The move was reconsidered. And the memorial did not return to its old site. It was a cynical and false promise. 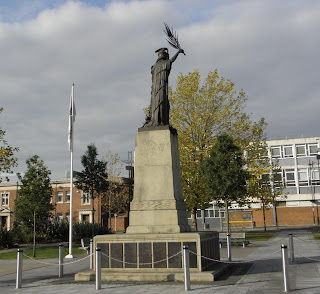 Then, with the Tories in power, a long-standing scheme for the much-needed redevelopment of Crewe town centre collapsed. Still Old Brian survived. The former leader of Crewe and Nantwich Council, and one-time Mayor of Crewe, became deputy leader of the new Cheshire East Council. But, cast into a rather larger pool, the bigger and wilier fish soon finished him off.

First, Silvester was eased out of his deputy leadership role. Then, despite he and his brother having got away with it for over 30 years, his rented bedsits in Shavington (not really a “slum”, PS) were found to have breached fire safety regulations on eleven counts. Moreover, he had failed to obtain a multiple-occupancy licence for the premises. He resigned from the Tory Party before they kicked him out.

Sure, Silvester is an easy target for poking fun at UKIP, and Nigel “Thirsty” Farage may come to regret not having the admission door more firmly secured as soon as he and his pals saw Old Brian coming. But the more obvious question is for the Tories to answer: how did they allow this man to stand as a Parliamentary candidate, continue to be a Councillor, and lead Crewe and Nantwich Council?

And how did they allow him to become deputy leader at Cheshire East? Moreover, the thought enters that the way in which Silvester’s dodgy bedsits were unearthed was, as part of Cheshire’s Tories purging an unwanted outsider, an example that dirty tricks and low cunning are not confined to one party, and certainly not to those in the Westminster bubble.


That was the Crewe and Nantwich Life Of Brian. You lucky, lucky bastard.
Posted by Tim Fenton at 17:16

30 odd years ago my mum's brother in law was a Consvervative parish councillor near Crewe and did other work for them. Then he went to a party garden drinks event and was introduced to their new upcoming star, Brian Silvester, aka Prince of Darkness. After that he went home and dropped out of the party, quite a reaction to one conversation!

And the UKIP link is not a big surprise, I seem to recall that one of the recent local UKIP candidates in Crewe was previously a Tory cheerleader for PoD in the days when he couldn't actually do any damage. Yes Mr Walklate, I'm talking about you, and whilst I'm here, could you move those sodding vans off the corner!


But let's come back to more recent events. The low quality bedsits seem like the sort of place that would attract people on very low incomes with no state support, for instance, east European migrants. Can UKIP confirm whether or not PoD was happily taking money off any?

And I hear the prosecution did not come from the first inspection, fire officers had made previous reports about the bedsits but they weren't followed up. Maybe a FOI request would be in order to find out exactly what was going on. Either inspections missed serious faults or someone sat on the reports. Any real journalists out there care to have a go? This is a trade sadly lost in Crewe many years ago so the local rags won't be doing anything.