As if to let slip that yesterday’s lame attempt to push the press’ own Royal Charter – which is no more than a re-heating of the already discredited Press Complaints Commission (PCC) – was part of an organised campaign by the Fourth Estate to head off the horrifying prospect of truly independent press regulation, one faithful Murdoch retainer has made his play today. 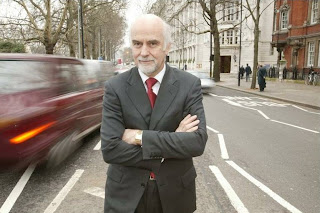 Step forward Trevor Kavanagh, ostensibly a wise old man of journalism, but in reality a purveyor of wilful and serial spin and dishonesty who has been on grovel autopilot for so long that he no longer understands the meaning of the word “shame”. Here’s his first punt: “Last year, as the Leveson Inquisition dominated Guardian and BBC headlines, he was tipped as the next Lord Chief Justice — Britain’s top judge”.

See, it was only because of the rotten lefties at the BBC and Guardian that anyone found out about the Leveson Inquiry! But do go on, Trev: “Today, his dream seems in ruins after the furore over frisky lawyers and claims Sir Brian sat on evidence that lawyers are far bigger phone hackers than newspapers”. Bullshit. Leveson is still one of three candidates for LCJ – see HERE and HERE.

Anyhow Trev, have another go: “The Leveson Report itself has been savaged over its loopholes, inconsistencies and contradictions, and his attempt to shackle the centuries-old free Press is bogged down in Parliament”. False projection there I’m afraid: there is no attempt to “shackle the press”, only to make regulation independent and thereby give the public confidence in Trev and his pals.

And they clearly don’t want the public to have confidence in the press, which might even sell more papers. Kavanagh and his pals just want to keep on smearing, bullying, dissembling, spinning, misinforming, and practising all those “dark arts” that were not going on until Nick Davies rumbled the SOBs. But Trev has an ace up his sleeve: he’s going after David Bell. Remember him?

“Throughout his lopsided inquiry, the judge was accompanied by leech-like Sir David Bell ... Yet Bell was never impartial. He was a founder of Common Purpose, a shadowy organisation dedicated to curbing the Press”. Oh, f*** right off Kav, and I’m not even going to say please. Common Purpose has sweet jack to do with anything of the sort. Now you’re just inventing porkie pies.

And he’s not finished: “Sir David, whose links with these organisations should have disqualified him from the outset, recently poured out his heart to a friend”. How many blokes of Kavanagh’s age still have imaginary friends? But stay with it to the end: “it would serve MPs right if the newspaper industry now withdrew from the process, flatly rejected Press regulation — and challenged Parliament to do its worst”.

Yes, the press don’t want real regulation. As if we didn’t know that at the outset.
Posted by Tim Fenton at 12:29

The funniest line in the piece accuses Leveson of an "establishment stitch-up" - It's times like this that we should remember that Rupert Murdoch's daughter's gadfather is none other than former Prime Minister Tony Blair himself. Oh the irony!