This blog routinely gives the perpetually thirsty Paul Staines and his rabble at the Guido Fawkes blog stick. The Fawkes folks, generally, richly deserve it. But on one matter, I agree with Staines, and that is the clumsy defamation of him by the technologically illiterate Tory MP Claire Perry, who represents the unfortunate people of the fine town of Devizes (home of Wadworth’s legendary 6X ale). 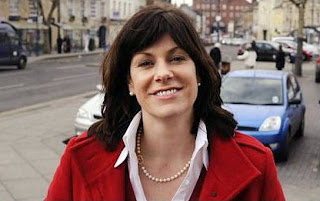 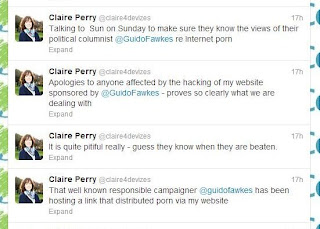 Now, this blog has noted that The Great Guido has in the past threatened to set m’Learned friends on his critics on what look like shaky pretexts – the incident outside London Bridge tube station, where a camerawoman was knocked over, comes to mind – but this is straightforward and clear defamation, and moreover, Staines has given her ample opportunity to withdraw.

So now the stage has been reached where Staines’ lawyers have been instructed – The Great Guido might also consider looking to Adrian Hilton aka Archbishop Cranmer, who has repeated the “sponsored” accusation – and it can only end in tears for Ms Perry. Not only is she more than likely to lose any subsequent action, but will also be exposed as a clueless technophobe. 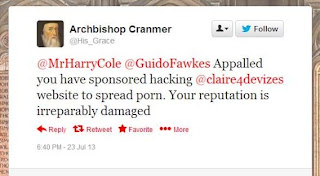 And that’s going to be difficult for the press’ anti-porn campaign, which, as Unity points out in his post today, has been, shall we say, subject to Ms Perry’s input. As Paul Bernal has pointed out at the Staggers, the proposals unveiled the other day by Young Dave raise more questions than they answer, and are deeply unconvincing as a result. The Perry sideshow could seriously damage Cameron’s idea.

The best course of action for Claire Perry is to hold her hands up, say sorry, and pay whatever multiple of The Two Dollars is necessary to settle the legal bills. Then she has to hope that the news cycle will move on, and spare her further embarrassment. Because the more attention that is focused on her lack of technical savvy, the more it will damage her reputation and that of the anti-porn campaign.

On this occasion, it is not The Great Guido who is in another fine mess.
Posted by Tim Fenton at 14:47

Her antiporn campaign is just a Daily Mail sponsored piece of shit legislation being rolled out to appease the Mumsnet brigade next election. It deserves to die a slow death, and surely will as soon as the government realise it's not actually feasible or practical to implement.

Obviously ridiculous to blame Staines. The Dilbert strip 'pointy headed boss' was based on Staines knowledge of technology.

Interesting how the Daily Mail have chosen to completely ignore the story.

Young Dave should fire Perry and hire my daughter for his internets adviser.