Mail Seeks To Ban Itself

The legendarily foul mouthed Paul Dacre has a righteous obsession with pornography: it is, for him, an evil from which those Daily Mail readers with whom he has his regular conversations should be protected, for their own good, you understand. So his paper has today lauded Young Dave, who is supposedly going to get his jolly good chaps to do something about it. 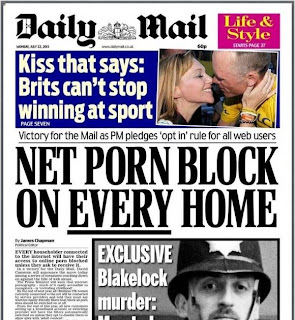 So is the Mail going to filter the skimpily clothed models, the upskirt shots, the raunchy concert performances that would bring instant condemnation if the BBC screened them, and all the instances of children and under-age models out – by default? And if not, why not? If they want everyone else to be “cracking down” on “web sleaze”, they should be prepared to set an example.

But they won’t, because they’re a bunch of hypocrites. No change there, then.
Posted by Tim Fenton at 10:09

"includes several photos of a one year old child in a leopard print string bikini"
Be fair. The Mail has refrained from calling the child "all grown up".

some of the comments under the online version are a joy to behold, proving that you can't fool all of the people all of the time - not even daily mail readers.

I spoke too soon. "Bouncing baby: Little Penelope celebrated her first birthday earlier this month and is growing up fast"

Of course this is just a stunt by Dave to please the likes of the Mail (and others who still think Humbers are pretty cool cars). Automated filtering has a very limited scope and is massively prone to cock ups (some will now stop this page!). In the late 90s the email system we had at work had an American standard moral guardian built in - the trouble I had sending emails about a customer in Scunthorpe, it would have been quicker to post the bloody things. Anyway, Dave has already fallen foul of this, apparently the filters already running on some mobile systems blocked the BBC news page about his big idea - because it contained the phrase "child pornography".

But whilst we can laugh at his struggling there is a more serious issue. His efforts are directed at people viewing the images. But the real problem is the abuse itself and nanny state (weren't the Tories against that..) filters don't stop the abuse. Even if they work they merely create an impression it isn't there, they draw a virtual veil over the problem.

He's also announced that CEOPS will get more powers. That would be useful, but last year CEOPS only had the resources to investigate about 5% of the cases that it already had powers for - so without a 20 fold increase in resources they will be swamped.

Personally I'd like a filter that blocks any page containing the phrase "David Cameron announces...". Luckily we now have a royal baby story to knock his publicity stunt so far back it'll be in the classified ads.