Following the Independent Parliamentary Standards Authority (IPSA) report which has begun a consultation process on MPs’ pay and benefits, there have inevitably been questions over the level of that pay over the years, and how it has compared to others. For the perpetually thirsty Paul Staines and his rabble at the Guido Fawkes blog, it has also been an opportunity for spin and dishonesty. 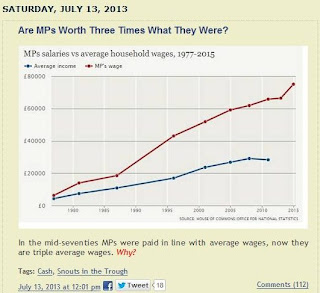 “Are MPs Worth Three Times What They Were?” asks the Fawkes blog, before displaying a chart of routine fraudulence with the payoff line “In the mid-seventies MPs were paid in line with average wages, now they are triple average wages. Why?”. They were? Strangely, the chart that Andrew Sparrow of the deeply subversive Guardian had included in his live blog looked rather different. 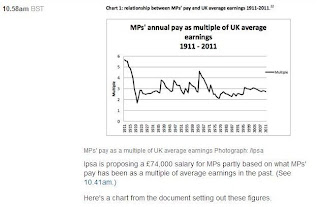 ... with the Guardian ones

The chart in question, titled “MPs’ annual pay as multiple of UK average earnings 1911-2011” shows that at no point since just after World War 1 has that pay fallen below two times average earnings, though it also shows that, just after the mid-70s – the starting point for the Fawkes chart – it came close to it. The two analyses cannot both be right. Or can they?

Look again at the Fawkes blog, and the title of the chart: “MPs’ salaries vs average household wages, 1977-2015”. Note the use of the word “Household”. This is how Staines and his pals have massaged the figures to favour their typically dishonest proposition: this only holds if (a) an MP is the only earner in his or her household, and (b) there is only one earner in every other household.

If, as the Guardian chart shows, MPs’ pay in 1977 was just over two times average earnings, those MPs were not “paid in line with average wages”. The Great Guido has been caught telling porkies once more: over the years, the average number of earners per household has clearly declined. Perhaps Staines and his pals would care to blame the House of Commons for this development.

And, when they’re through with that one, maybe they could explain why their chart is missing two data points for the “average household wages” series, or just admit that the only reason they’ve included them for MPs’ pay is to make those MPs look bad (plus the last data point common to both series does not show MPs’ pay three times average household wages, but around 2.2 times – more dishonesty).

So, once again, The Great Guido is full value for that 4% positive trust rating. Like his pals at the so-called Taxpayers’ Alliance, the fiddling becomes so much easier to spot once you’ve rumbled the SOBs.


But nice try Fawkes folks – pity about the porkies. Another fine mess, once again.
Posted by Tim Fenton at 09:31

Salary Expectation is established with a motive to help expatriates access the cost of living information.
salary Report