The Guardian’s Simon Jenkins seems to be always chasing lost causes: for so long, he railed against the coming of Crossrail (and at the time I suggested he should be made to commute regularly on the Central Line until the penny dropped), and now he is aghast at the march of high rise buildings – generally steel and glass towers – that are set to cover yet more of London. 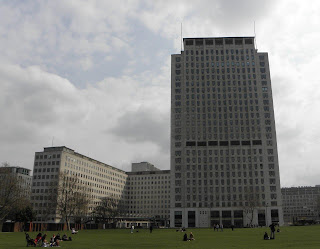 Unfortunately, Jenkins starts badly by lapsing into Daily Mail speak: “a visual wall of towers on a truly Stalinist scale behind the Royal Festival Hall”. Then he doubles down with “It is as if Paris had relocated La Défense to the Ile de la Cité”. Bloody well isn’t: the Grand Arche alone wouldn’t fit. But his point shows why he is whistling in the wind, and well after the event. 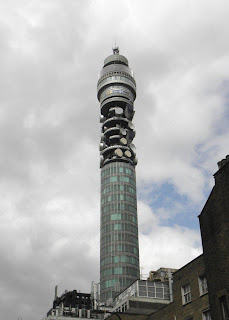 While he says “London is alone among Europe's great cities in its drooling slavery to ‘anything goes’ on its skyline”, he fails to notice that this has been the case for many years. Yes, much high rise development has been shuffled off to Docklands, but it has already been allowed in the City Of London. So we already have the Lloyds building, the NatWest Tower (as was) and the Gherkin.

And, as the Shard, and that tower at Vauxhall that became notorious recently when a helicopter crashed into its crane, are already there, the high rises have by definition arrived on the South Bank. Jenkins is right that other cities have kept this kind of thing out of their old centres: Paris shuffled them out to La Défense, Madrid to Chamartín, Lisbon to Oriente, for instance. 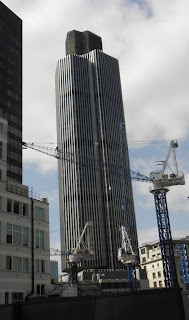 But if he thought that London’s occasional Mayor Alexander Boris de Pfeffel Johnson would put a stop to something that had started under his predecessor, he really is wet behind the ears. And he ought to remember that London’s buildings have been pushing higher for decades – he even gets to mention one of the prime examples, the 27-story Shell Centre tower from 1961.

That building was soon eclipsed by the Millbank Tower – just across the river – which is both close to Parliament, and higher than Centre Point, which he quotes instead. All of this goes to show that no barrier to higher rise buildings has ever been established, either in the City, or by the Thames, and neither bank of the river has been kept free of such structures. 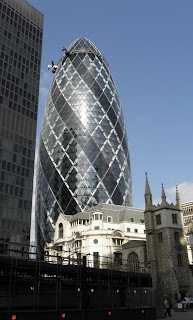 ... and of course the Gherkin

And, as Jenkins observes, there will always be architects and builders more than willing to design and build taller buildings. Without planning constraints, they will be built wherever there is both demand for them, and land to build on. There is a more or less permanent demand in London, and land is being freed up. So why does the Guardian’s pundit expect any other result?


As the world turns, Simon Jenkins is still running to catch up.
Posted by Tim Fenton at 13:13

There were a fairly small number of very tall buildings in the distant past, including the ones you mention. The Post Office Tower, Centrepoint etc were a big deal. Others like Millbank were not very popular. The City, until it faced being outflanked by Canary Wharf, was generally conservative about building heights. And there were/are a number of protected views of St Paul's.

So there wasn't exactly a coherent ban on tall buildings- there was no London government- but the effect was that there weren't all that many in the centre.

Jenkins is right that it's changed so much in recent years as to be all but a completely new policy. As he says, some of the new towers are good, many are awful.