The faux outrage that began over vacuum cleaners has now spread to become a paranoid frightener about any household electrical appliance, while the factual content of the coverage has fallen to more or less zero. This was typified by today’s Express front page, howling “Now Kettles Face EU Ban”, which is totally untrue, as is the sub-heading “Brussels meddlers in another assault on our way of life”. 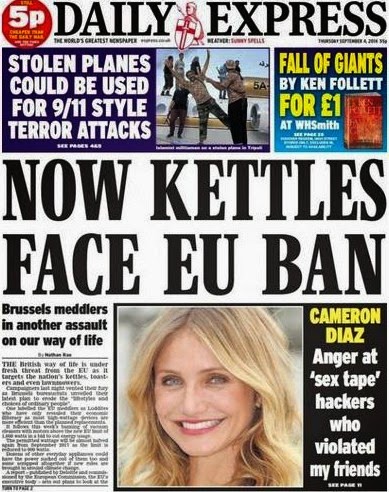 The article warns “THE British way of life is under fresh threat from the EU as it targets the nation's kettles, toasters and even lawnmowers”, and this, too, is totally untrue. We know this as Full Fact has perused the offering and concluded “Kettles are still not about to be banned by the EU”. But the paper also known as the Daily UKIP cares so little about facts that it just carries on with the deception.

After pausing for a mention of the facts – “A report published by Deloitte and commissioned by the European Commission, the EU's executive body, sets out plans to look at the energy usage of a range of items and whether they could be made more efficient” – and reminding readers “The final decision ... would be taken by the Member States”, the clowns, sorry, pundits are summoned.

These dispense the most extraordinary drivel: Alan Murad of Get Britain Out was typical. “Astonishing ... Luddites ... economic illiteracy” he spews, before spraying his cred up the wall with “most high-wattage devices are often more energy efficient than what they'll be replaced with”. If they were energy efficient, they wouldn’t need to draw all that power. But he then rallies to reel off the usual soundbites.

“The meddling in our affairs by unelected bureaucrats, the relentless stifling of consumer choice, prove the EU have [sic] no democratic credentials to speak of. It is yet another assault on the British way of life”. As it isn’t happening, that would be difficult. But there is a yet more fundamentally stupid pundit on offer, Benny Peiser of the Global Warming Policy Foundation.

You’ll love this: “There is no example in history when any product technology has become more energy efficient and this has led to a decrease in energy usage, in fact the opposite happens”. Hello Benny! See that car of yours? Now look at its 1960s predecessor. That 50 year old technology was lighter – hence it rotted away – but had an engine just as big, if not bigger, than its modern equivalent.

That modern car will accelerate faster, has a faster top speed, is much heavier (rotten EU standards to stop us getting killed by mobile death traps, eh?), and yet it returns better fuel consumption figures. It has, let us not drive this one around the houses for too long, become more energy efficient over time, and this has led to a decrease in energy usage. That Benny Stupid Peiser said never happened.

Totally untrue story backed up by totally batshit pundits. What a load of rubbish.
Posted by Tim Fenton at 17:30

The wattage of a device is a direct and unambiguous measurement of how much power it is consuming, the higher the wattage the more power it consumes, therefore a higher wattage device cannot be more energy efficient than a lower one. Apologies for stating the bleeding obvious.

@lx999, I know what you mean. A higher wattage item consumes more power than a lower-power one. But from a laws-of-physics point of view, it's not that simple. For example, a high-power kettle could boil water quicker, and use pretty much exactly the same amount of energy (higher power for less time). Maybe during that time less heat energy would be lost through the casing (tiny difference), but there are lots of other factors to consider. Maybe it has less thermal mass with its different sort of element, or even more importantly its design might allow smaller amounts of water. The worrying kettles are the ones which "keep warm", encouraging to you boil too much and keep topping up its temperature for too long. An energy certificate on those would be very revealing.

It's not entirely correct that increased energy efficiency leads to a drop in energy consumption - that only holds when there's also regulation to reduce energy usage overall. It's called Jevons Paradox. Efficiency gains on their own won't cut our energy consumption.

It's amazing. Scotland may vote for the break-up of the United Kingdom. There are no debates in Parliament. The only voices standing up consistently for the Union are from the opposition, Darling and Brown. The newspapers are full as always with the supposed loss of sovereignty to the EU - now represented by a fictitious ban on kettles. Tory EU sceptics threaten to pull out of the EU on account of a loss of sovereignty which will have survived withou major problems since 1972. But they are all dumb when it comes to the disintegration of the country. Who are the patriots now?

Polly put the nutters on said...

Anonymous 5 September 2014 15:00: -
Yes, when people buy more and more energy consuming products and use them for greater lengths of time. That was not the point of the Daily UKIP article though.

Anon on 5 Sept at 13:21,
The worrying kettles are the ones which "keep warm", encouraging to you boil too much and keep topping up its temperature for too long. We saw those at G20.
Seriously, how on Earth do kettles encourage people in the way that you suggest?

Power is measured in Watts, but efficiency has no direct relationship with the power. A higher powered device can be more efficient than a lower powered one.