As the referendum on Scottish independence moves centre stage, the opportunity for creative interpretation of the issues has been seized enthusiastically by the Mail On Sunday, which has added Labour bashing to bring readers the alleged news “We'll put guards on Scottish border: Ed Miliband reveals incendiary plan as Yes camp leads for first time in shock new poll”. 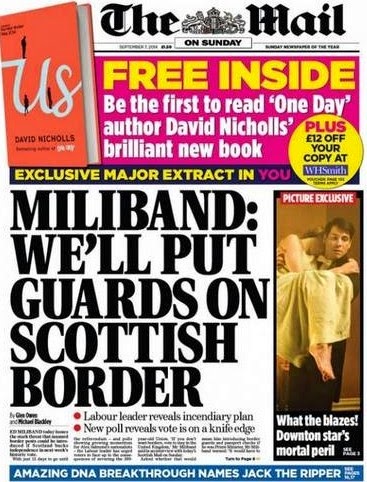 However, and in this case we encounter a significantly sized however, there was, as Captain Blackadder might have observed, only one problem with this story – it was bollocks. There has been no proclamation from Mil The Younger, and there is therefore no “incendiary plan”. Moreover, the detail of the MoS article is so inept, the thought enters that it was more hatchet job than factual analysis.

So what did Miliband actually say? “If you don’t want borders, vote to stay in the United Kingdom”. Is that all? “Asked whether that would mean him introducing border guards and passport checks if he was Prime Minister, Mr Miliband warned: ‘It would have to be looked at’”. Perhaps the inhabitants of the Northcliffe House bunker would like to explain where the “incendiary plan” is in that?

After talking of “a new Hadrian’s Wall” (which does not follow the border between England and Scotland), the MoS claims “New border posts would cause chaos for travellers and prove to be hugely damaging to business ... If controls were set up, immigration staff could man barriers on the roads while the train terminals would have to install checks similar to those adopted by Eurostar”. 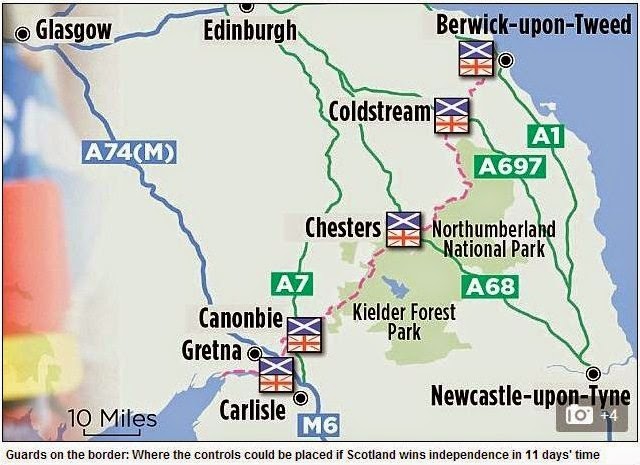 The problem here is that the whole article is predicated on the claim made about what Miliband did not actually say, and the detail, as I mentioned earlier, is all over the place. “Guards on the border: Where the controls could be placed if Scotland wins independence in 11 days' time” tells the MoS about its map showing the border area. Now check out those border posts.

Berwick-upon-Tweed? Berwick is firmly in England. It’s around four kilometres from the border. You wouldn’t put a border post that far from a land border. The use of Canonbie is no better: it’s in Scotland, and by, yes, not far off four kilometres. And what’s with “Chesters” on the A68? The border is crossed at Carter Bar. Oh dear, Geordie Greig and gofers!

We could play “what if” all day and every day, all the way to the day of the independence referendum. And it would be as pointless as the MoS drivel claiming that the Labour leader said something he didn’t, and has an “incendiary plan” that he doesn’t. We could also have a more coherent idea than those in London of where the Scottish border actually lies.

Still, it frightens readers and sells papers, so that’s all right, then.
Posted by Tim Fenton at 12:04

I love the artist's impression of a ten lane border crossing. Imagine the chaos as the traffic has to merge back into three lanes afterwards.

You not been to the Dartford Crossing then, Alfred?

It's a win-win from the Mail's point of view: If Scotland vote Yes to independence Labour is weakened in Westminster, and a story like this might push some undecideds into the Yes camp. On the other hand, if Scotland stays it weakens Labour as it makes Ed Milliband look bad and might push Scottish Labour voters toward another party

Passport controls on roads and trains like those between UK and the Republic of Ireland perhaps............ *


Milliband made his comments weeks ago, and they followed a string of IF questions, such as, IF an independent Scotland had a very different immigration policy to England...


* if the Mail researches that it will cause a panic - we have an open border!