Some politicians and business leaders dabble with Twitter. Far more get someone else to do the Tweeting for them. There are good reasons for taking the latter course of action, and Creepy Uncle Rupe has just given a masterclass in demonstrating them. Murdoch’s papers have been on a hair trigger with all those Scary Muslims of late: it looks rather like he has had more than a little involvement. 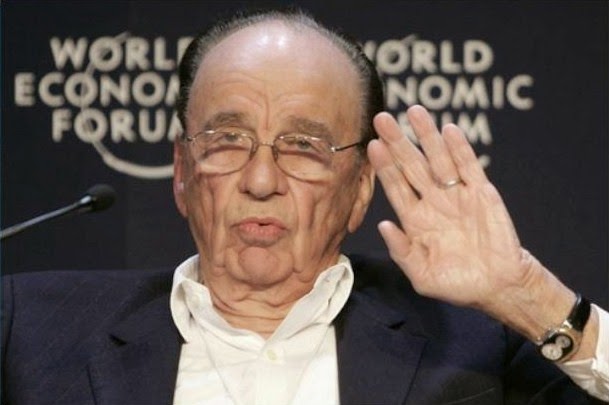 It's a Twitterstorm Rupe, you can't wave it away

Remember last Friday’s Sun front page splash? The killing of an elderly woman in her back garden somewhere in North London was down to a “Muslim Convert”. The paper’s spinner was more than happy to defend the story, if only on the grounds that the Evening Standard lifted the angle before engaging collective brain. Now even the Sun has dropped it. The idea came right from the top. 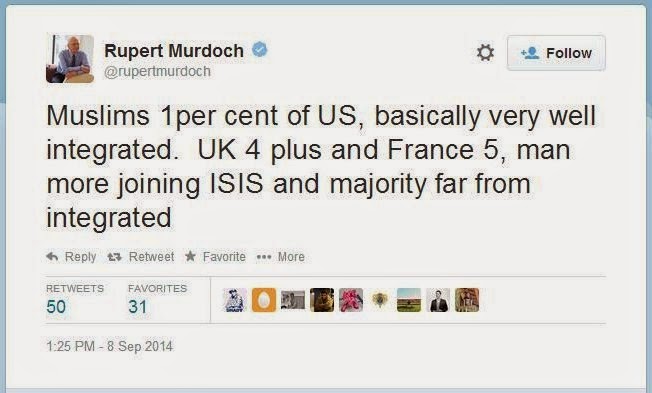 “Muslims 1 per cent of US, basically very well integrated. UK 4 plus and France 5, man[y] more joining ISIS and majority far from integrated” mused Rupe yesterday. If the majority were “far from integrated”, that would be a heck of a lot of people – more than 2% of the UK population, or well over a million. Murdoch doesn’t think things through before making the conclusion that drives his papers. 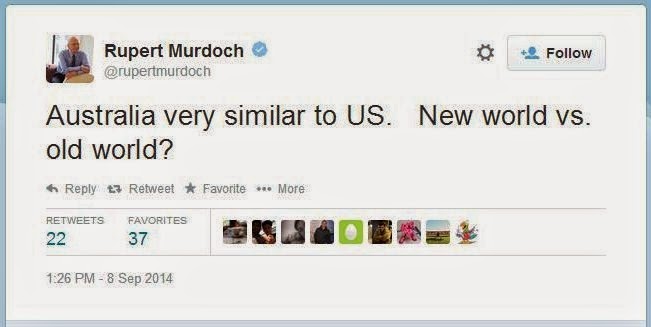 Then comes his get-out clause for home and adopted home: “Australia very similar to US. New world vs old world?” Yes, it’s total drivel: both the UK and France had colonial involvement in countries with significant Muslim populations. Again, he’s not engaging brain. Then he takes his Scary Muslims conclusions and marries them to current events in the UK, and it starts to get silly. 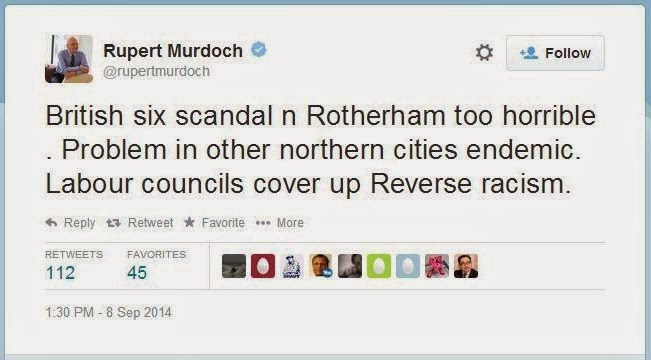 “British six scandal [i]n Rotherham too horrible. Problem in other Northern cities endemic. Labour councils cover up reverse racism”. Wait, what? “Six scandal”? Is that like meeting Dive and Ribikah to talk about the Tirrorist Bum Outrige? Hello Rupe, are you sure you should be on Twitter right now? 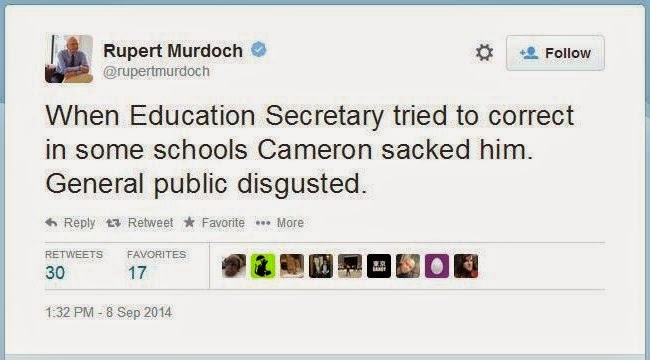 Then he loses it completely: “When Education Secretary tried to correct in some schools Cameron sacked him. General public disgusted”. Where do we start? Child Sexual Exploitation in Rotherham has somehow been connected to religious conservatism in some schools in Birmingham and the demotion of Michael “Oiky” Gove. Senior moment? Controlled substance? Step away from Twitter than man!

OK, Murdoch is unhappy with Young Dave for demoting his man – Gove was a Murdoch hack before becoming a Minister. But the “general public” was far from disgusted when he got binned, and anyone else in Government, plus most of the education profession, was dancing in the streets at the news. Rupe has next to no chance of spinning that one the other way.

We now know where the Sun’s rabid Islamophobia comes from. And that someone needs to take Twitter away from Don Rupioni – for his own good.
Posted by Tim Fenton at 12:35

This is unconnected, but on the West London Free School tip - I noticed borsWatch on Twitter saying that our Toby is hiring thinktankers as teacher. Another interesting change in staffing is that they have a new head of Art, who seems to have replaced Lily Akseth. Her appointment was loudly championed by Toby back in the day (if he never actually mentioned her by name), since she was their sole teacher who didn't have a qualification - you know, that thing that teachers don't need to have because they're Marxist-approved etc etc. Last year Toby said of her:

we currently employ a teacher who doesn't have QTS, yet the headmaster and the governors believe she's qualified for the job because she has one undergraduate degree and two post-graduate degrees

Well - guess what? After two years she's not on the staff list, and has seemingly gone back to work in the non-educational world. She might have been 'qualified for the job' but it's a job she's abandoned after 2 years. Maybe a brilliant offer came along - who knows. But I, for one, am deeply shocked that her replacement has a PGCE and extensive teaching experience. What were 'the headmaster and the governers' thinking in that appointment? Oh wait - Toby's not a governor any more is he?