What a difference eight months makes: in February, when former BBC DJ Dave Lee Travis, charged under his real name, David Griffin, was cleared on twelve charges of sexual assault, the press knew who was to blame: “No halt on the celebrity 'witch-hunt': Scotland Yard will continue Operation Yewtree despite storm of criticism after Dave Lee Travis is cleared of sex crimes” told the Mail. 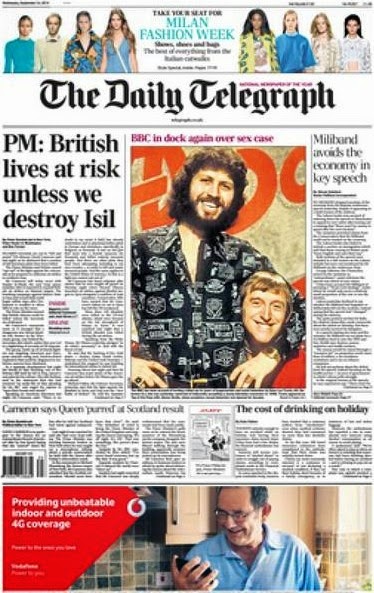 The Telegraph was similarly unimpressed: “As Dave Lee Travis is cleared, are we seeing justice or a witch-hunt? Jimmy Savile’s legacy of sexual abuse has created a crisis for the police and Crown Prosecution Service”. Yes, the dastardly CPS was the one wot done it. The Tel reminded readers “The previous week it had been Bill Roache, the Coronation Street stalwart”. He got off too.

The Mail made sure readers did not forget about “last year’s failed prosecutions of Coronation Street actors Michael Le Vell and Andrew Lancel” while the Tel asked “Is there a pattern? Has the Crown Prosecution Service (CPS) overplayed its hand in an attempt to atone for past failures to nail Savile?” The failures to “nail” Savile, let us not forget, included the collective cowardice of the press.

The Tel put the CPS in the dock: “Cries of 'witch-hunt' have accompanied every acquittal. Even more worrying for the CPS is that they are overseeing a conveyor belt of high-profile alleged offenders arrested by Yewtree and either facing prosecution or currently on bail ... They include Rolf Harris and Max Clifford, the publicist”. But then, Harris and Clifford both got guilty.

And so, yesterday, did DLT, at which point the Mail about turned and forgot its campaign against the CPS. “Dave Lee Travis was facing jail last night after he was convicted of using his ‘Demi-god’ status to molest a young researcher at the BBC. The ‘sleazy’ DJ thought he had a ‘perfect right’ to grope the young woman – who is now a successful TV personality in her own right”.

The Telegraph did likewise: “BBC faces accusations that rumours about Dave Lee Travis's behaviour were ignored ... Dave Lee Travis faces a possible jail sentence after being convicted of Operation Yewtree offence, but questions remain about why the BBC did not act to stop him sooner”. The front page spelled it out: “BBC in dock again over sex case”. And they worked Savile into the picture.

Yes, at first it was poor innocent DLT getting the flak for Savile, but now readers are told that they were all the same, and that the BBC is the one wot done it. And, to add insult to injury, the Mail says it was Travis “who previously branded the case a celebrity witch hunt”. Thus the Fourth Estate avoids criticism of its previous attacks on the CPS, knowing he’s guilty anyway.

As Operation Yewtree continues, there will be more to come. No change there, then.

[UPDATE 1545 hours: As Unity at Ministry of Truth has pointed out, the show that DLT was appearing on at the time he committed the assault for which he got guilty yesterday was produced in Manchester by Granada, which is emphatically not the BBC.

That papers like the Mail and Telegraph choose not to reveal this information, while kicking the Corporation, tells you all you need to know about their agenda]
Posted by Tim Fenton at 10:17

Of course, the show that DLT was appearing on at the time was made by Granada at Manchester, so where this 'BBC corridor' idea comes from I don't know.