Of all the “might have been” schemes from all those years ago, those cancelled by Harold Wilson’s incoming Labour Government in 1974 evoke the most poignant reaction: one was the Channel Tunnel, later built in more or less the same configuration as proposed back then, and the other was a new London Airport at Maplin Sands, which sounds rather nicer than Foulness. 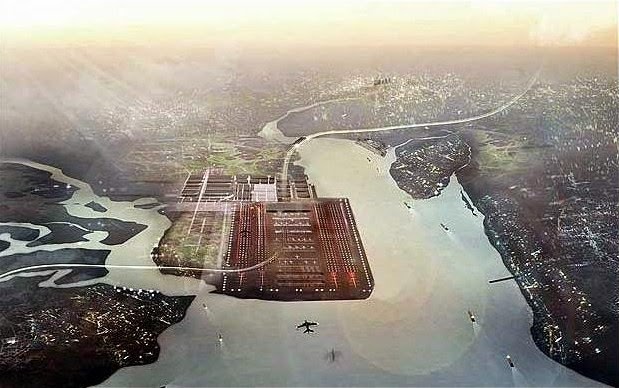 Available only as an artist's impression

Had Maplin Sands gone ahead, it would have been operational 30 years ago, and all the brouhaha over Heathrow expansion would have been headed off. Instead, we now have a very full Heathrow and very few sensible ideas to relieve it. And one of the not at all sensible ideas, a new airport on the opposite side of the Thames estuary to Maplin Sands, keeps being pushed by its sole major fan.

Yes, this morning London’s occasional Mayor Alexander Boris de Pfeffel Johnson has used his “chicken feed” generating column in the Maily Telegraph to urge the construction of more and bigger runways for the benefit of Himself Personally Now. This is despite the Evening Standard, aka London Daily Bozza, the paper that normally cheers unconditionally for the Mayor, pronouncing the scheme dead.

That has not stopped Bozza from pitching some highly dubious assertions, such as “Heathrow is already by far the noisiest airport in Europe, about a hundred times worse than Paris”. As the mix of aircraft types using both airports is broadly similar, this is clearly bunk. What he presumably means is the number of people affected by noise pollution. Pity he isn’t so fussed about central London’s air pollution.

But he does know that other European airports have more runways: “Paris CDG already has four runways and serves 257 destinations; Frankfurt serves 291 from four runways; Amsterdam serves 277 from six runways”. None of this justifies Bozza fraudulently claiming that his new airport could be built for less than £26 billion: the road and rail links alone could add almost £45 billion to that.

What Bozza does not seem to get is that all the other airports he quotes were either established before Heathrow, and have fortunately been sited where expansion was easier, or, as in the case of Paris CdG, planned and then followed through without becoming a political football. CdG was also sited more favourably when it came to connecting to the French motorway and high speed rail network.

The London area does not have a site comparable to Schiphol, Frankfurt or Paris CdG. We are where we are. But the HS2 project – which Bozza now supports – will bring London close enough to Birmingham airport for it to be as convenient to access as, say, Gatwick. There are other ways to add capacity and destinations than to spray the best part of £100 billion on another Bozza vanity project.

Bozza’s estuary airport is dead. Perhaps someone at the Telegraph could tell him.

[UPDATE 2045 hours: Bozza's column appears to have fallen on deaf ears, as it is now clear that the Davies Commission is to drop the island airport from the preferred options for airport expansion in the south east. The same story has been carried by the Telegraph (Bozza's own chosen outlet for his musings) as well as the deeply subversive Guardian and the BBC.

Despite this, his airports man Daniel Moylan insists that the scheme could be exhumed at some time in the future, when Bozza is an MP. If he gets the nod for Uxbridge and South Ruislip, that could be a hard sell to his future constituents, given thousands of them depend on Heathrow, which would face closure if the island scheme went ahead.

As usual, Bozza spouts first and thinks at some later time. But his priciest vanity project has finally been killed off]
Posted by Tim Fenton at 13:20

Foulness (however poncified as "Maplin Sands") was a ill-conceived as "Boris Island", and for about the same reasons.

Apart from the simple problems of converting muddy slob lands into useable space, providing a new town adjacent, developing high-speed communications, persuading the wild fowl to bugger off rather than create serial aircraft failures (a.k.a. passenger and crew incinerations), there are the small matters of years of MoD munitions and the adjacent SS Richard Montgomery

As the late, great Giles Coren said (two days before Mercedes engaged Pillar 13): "I don't know much about Princess Diana or land-mines, but I wouldn't poke either.'