Yesterday, I looked at the case of seriously ill five year old Ashya King and his family, and noted that “The pundits and editorial pronouncements have not yet started, but start they will”. Today they have started, and if you were inclined to place the occasional bet, you might put your money on the first ones out of the blocks for a quick NHS bashing to be the Guido Fawkes blog and Brendan O’Neill.

And so it came to pass: the Fawkes rabble, for whom castigating the NHS and accusing it of cruelty is roughly equivalent to breathing, has pretentiously covered the story under the heading of “Guy News”, although they have no news of their own. The NHS is accused of “arrogance” and “cruelty”, and the gap in The Great Guido’s knowledge – as in most of the story – is replaced by clumsy guesswork.

Readers are told “From what the father says the NHS doctors were unsure of how to proceed with treatment”. The only people who can say for sure how accurate that assumption is are, fortunately for the Fawkes folks, bound by patient confidentiality, although if past form is any guide, the assertion is likely to contain a significant amount of weapons grade bullshit. 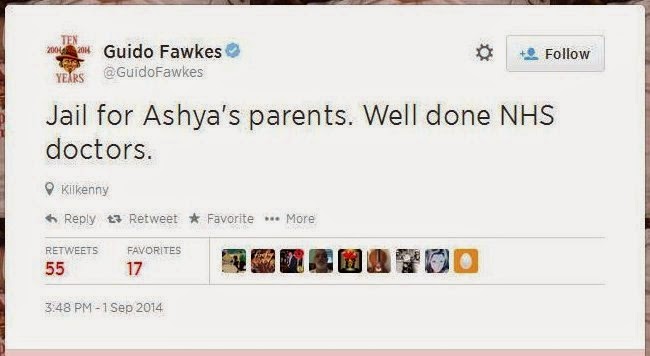 Moreover, for the perpetually thirsty Paul Staines, understanding what is going on is proving difficult, as witness his assertion “Jail for Ashya’s parents. Well done NHS doctors”. Yes, in the paranoid world of The Great Guido, Southampton General Hospital is able to take over the entire Spanish judicial system. But this is nothing to the logic-leaping exploits of clickbait-generator-meister O’Neill.

Given a pulpit by the bear pit that is Telegraph blogs, the editor of Spiked (so titled because it should have been) tells readers “the motor to this grotesque spectacle of hunt-the-dangerous-parents seems to have been the now sadly commonplace belief that parents cannot be trusted to care for their offspring and so officials must often barge in and take charge”. “Seems to” means he doesn’t know.

He then briefly admits his ignorance: “Of course, much is still unclear or unknown in the King family case”. So why is he sounding off about it? Well, “one thing that we can be pretty sure of is that the authorities' implicit depiction of Ashya's parents as erratic and a threat, and of Ashya as being at great risk, turned out to be highly questionable”. Baloney. No such description, implicit or otherwise, was given.

But on he ploughs: “It also raises an even more important question about parental authority and family sovereignty”. No thought is given to the shitstorm the NHS would have faced had they not acted. Then there would have been even more accusations of “cruelty” and “arrogance”, together with O’Neill arguing the toss in his spare time. And just think how wilful Littlejohn will be tomorrow.

Daft question but are these the same papers who complain of health tourism? I mean if the kids found a benefactor and they want to pay for this then fair enough but if they've traveled to Spain and then received treatment on their NHS...well, can you imagine if it was the other way round?

The EAW isn't popular because of the perception that it impacts on the British more unfairly than other Europeans. Originally the police said they only applied for it so they could talk to the family, which as far as I know, they haven't.
I have no problem with events up and until finding them, but events after smack of considerable injustice. What child cruelty? Yet the child is alone in a foreign hospital and the parents locked up.

Yes, you are a clueless pundit.