Guido Fawked – Protesting Too Much

As the fallout from the crude sting operation that entrapped Tory MP Brooks Newmark continues – both he and fellow Parliamentarian Mark Pritchard are taking the matter to new press regulator IPSO, and Pritchard is contacting the Police – there remains one corner of the commentariat that found out about the affair rather earlier than everyone else, and has been defending it rather too strongly. 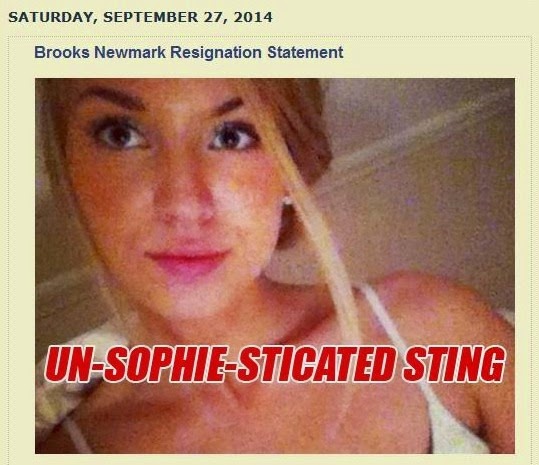 Yes, despite silence from the Sunday Mirror over their freelance source, emerging from the traps the earliest were the perpetually thirsty Paul Staines and his rabble at the Guido Fawkes blog: as I noted yesterday, their newly anointed teaboy Alex Wickham Tweeted out the news of the splash at 1805 hours, a whole hour before either of the hacks whose name appeared on the by-line. 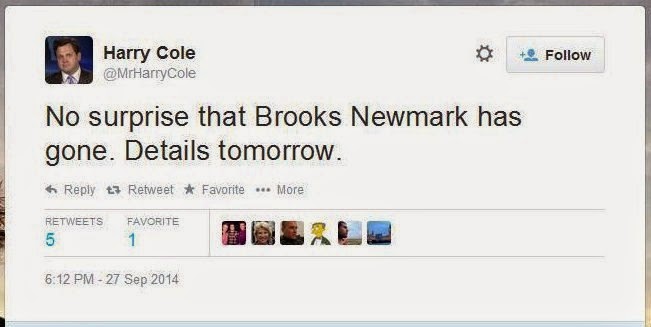 And the Fawkes blog followed up with a post just 14 minutes later: at 1819 hours, getting Brooks Newmark’s resignation statement, along with a photo of the model used for part of the sting, whose permission was apparently not given before her image was used. Then came the over-zealous defence of the story, undertaken mainly by the odious flannelled fool Henry Cole. 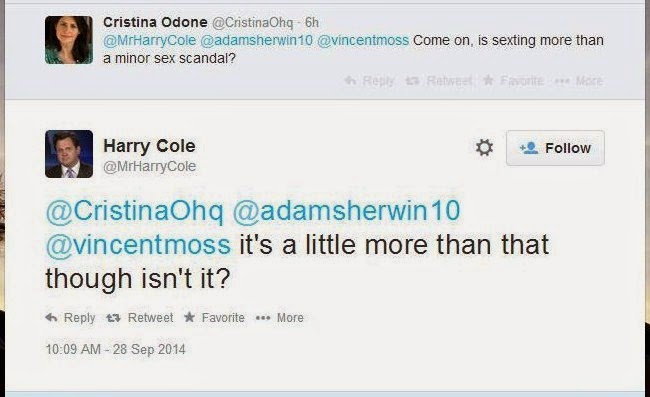 He was also rather too quick on the draw, observing “No surprise that Brooks Newmark has gone. Details tomorrow” at 1812 hours. Then, as Cristina Odone mused “Come on, is sexting more than a minor sex scandal”, Cole aggressively fired back “It’s a little more than that though isn’t it?” This was backed up with a Cole speciality: the lying and smearing combo. 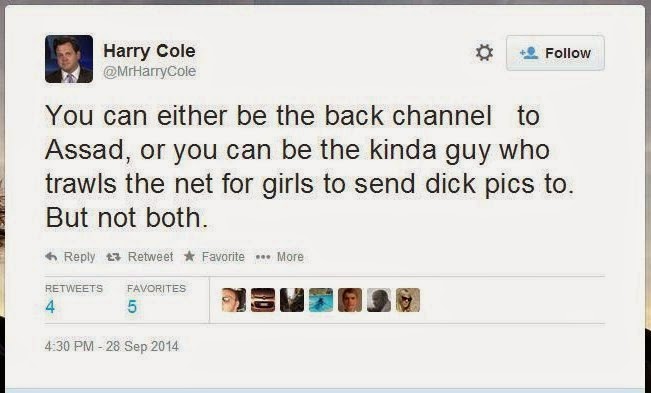 “You can either be the back channel to Assad, or you can be the kinda guy who trawls the net for girls to send dick pics to. But not both”. But, as any fule kno, Newmark did not trawl the net. He was targeted. As were six other MPs. Cole’s crude dishonesty, a clear effort to make Newmark look a lot worse, again shows that the Fawkes rabble is protesting rather too much. 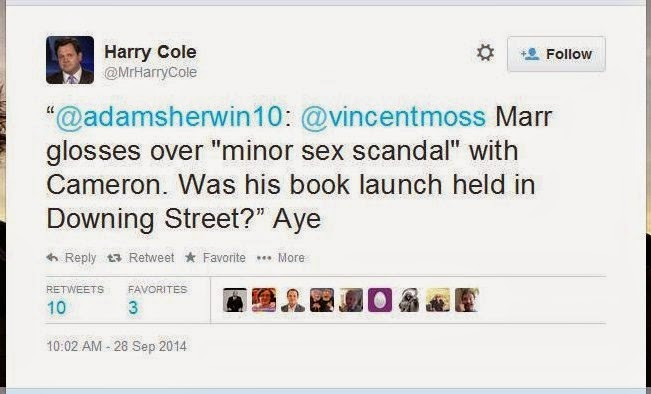 And why should they make so much noise, if they are not involved? Ah well. Consider Cole’s reaction to someone Tweeting “Marr glosses over ‘minor sex scandal’ with Cameron”. Then look at Wickham’s response: “why might Andrew Marr not want to talk about sex scandals”. The Great Guido and his followers never do get onto The Andy Marr Show (tm) sofa, do they? 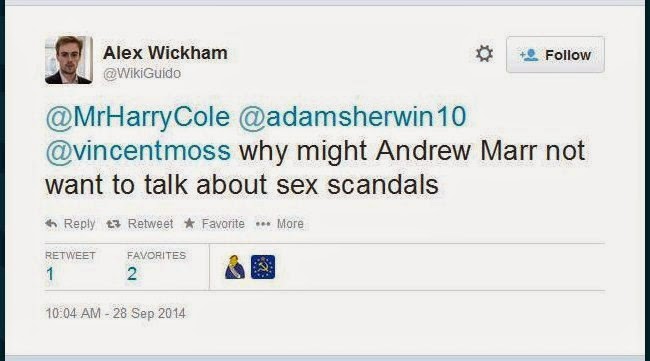 What we have here is a group of unsavoury characters who believe that the media owes them rather more respect than they are at present obtaining. The Fawkes rabble craves recognition and status: most right-thinking media folks, sadly for them, think the diametrical opposite. And they have still not explained why they were so well informed about the Newmark sting, while not being involved, honestly.

Somebody is protesting too loud and too early. Another fine mess, once again.
Posted by Tim Fenton at 10:59

Good blog but I think you are wrong about "right-thinking media folks." The Fawkes rabble does get recognition and status from the BBC and Sky. Harry Cole seems to be given lots of opportunities on both to expound his personal brand of schoolboy idiocy.
A man distinguished only by his complete lack of morality

Looks like you've just been proved to be spot on, Tim. Wickham was the reporter.

What a sad, grubby little man.

Well done. Your theory has been confirmed on Newsnight. Alex Wickham's pants are now on fire.