The legendarily foul mouthed Paul Dacre told one journalist on the eve of the 1997 General Election, as “Shagger” Major and his hapless crew were about to go down to the heaviest electoral defeat of modern times, that he could not go against the will of the voters. That will was to eject Major in favour of Tone. Dacre then about-turned and told his readers to vote Tory, which many of them did not. 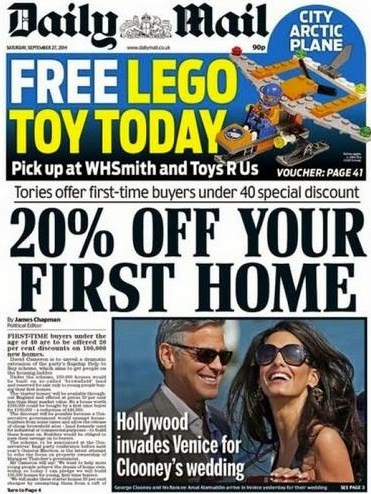 Not a mention of Iraq and airstrikes ...

The instinct of the Mail is deeply conservative, in many ways far more so than the Tory Party. But, unless it joins the Express in backing UKIP, the most conservative option open to it is Young Dave and his jolly good chaps. Today the paper has shown that it will indeed back Cameron, and therefore Dacre has confirmed what was being discussed at that Downing Street lunch the other week.

So how has the Mail declared its support for the Tories? Ah well. Every other paper has put the decision, following a debate in the Commons, to join the coalition executing airstrikes on ISIS (or whatever they’re calling themselves today) in Iraq, on its front page. Not the Mail: its headline, “20% Off Your First Home”, along with “Tories offer first-time buyers under 40 special discount” is blatant propaganda. 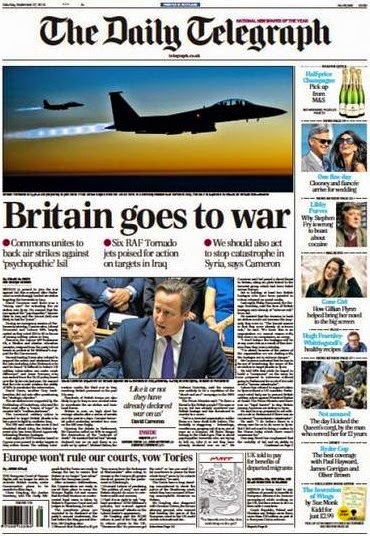 Why no mention of the Iraq airstrikes? Simples. These have also been backed by Mil The Younger and Corporal Clegg, and in the world of Paul Dacre no credit can be allowed to accrue to their accounts. Instead, the Mail has taken one of its key obsessions – home ownership – and used it in a crude and dishonest way in order to persuade younger voters to back the Tories.

Dishonest? Yes, and one would expect nothing less from the Mail: the whole scheme depends on developers being effectively gifted cheaper land, then agreeing to sell what they build at that all-important 20% discount, and only to those younger buyers (another untried and therefore theoretical wheeze, then). Market distortion is the way in which the party of free markets engineers extra votes – with the Mail’s help. 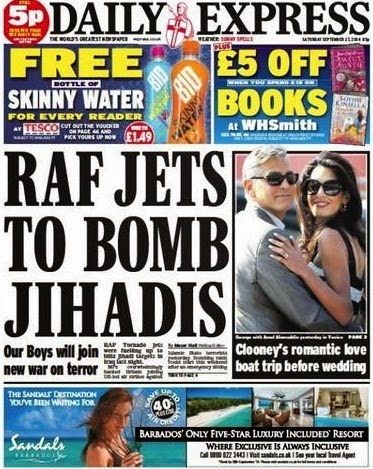 ... and even the Express

That this is propaganda is given away by such gems as “Housebuilding under Labour fell to levels not seen since the 1920s. The number of first-time buyers also collapsed, falling 60 per cent from 501,500 in 1997 to just 185,000 in 2009” before letting slip that housing starts are far lower under the Coalition. And there is an admission that the policy is a deliberate attempt to shore up support.

“As well as helping struggling young people wanting to buy a home, Tory strategists believe the policy will appeal to parents and grandparents worried about their families’ prospects” declares the article. Yes, forget about spraying billions up the wall on another Middle East adventure, and vote for that nice Mr Cameron. In this way Paul Dacre will demonstrate that he is still strong.

It will be a terrible pity if his readers fail to play along. Like they didn’t back in 1997.
Posted by Tim Fenton at 10:53

Slight porkie in all the spin as well.

It seems the housebuilders will not suffer the inconvenience of meeting modern eco standards - so the houses will be more expensive to run because of it.

Not a 20% discount but 20% value missing and guess what happens when you want to sell.....

Sometimes car manufacturers heavily discount new cars. Let's say you bought a nice Range Rover PENi5 Extender for £40,000. Next week the showrooms offer a 20% discount, this effectively reduces the second hand value of you motor. So, by extension, let's say you bought a new executive 3-bed detached for, say, £300,000 with ample room for the rapidly depreciating Range Rover. Next thing you know down the road they're building exactly the same house but selling them for £240,000. In a few years time you want to move and you're in competition with the houses down the road. Will they have appreciated in value plus some to match yours or will your property have to be marked down to match their's? If it's the former then the Tory plan of building affordable homes has not worked.