In the wake of the Labour Party conference, the loathsome Toby Young has decided to jump on the Miliband bashing bandwagon, and has taken to the bear pit that is Telegraph blogs to bring his adoring readers (Damien and James Delingbonkers) the not at all side-splittingly funny “Ed Miliband’s seven weirdest moments”. Here, he tells “He's like a political robot from the future”. 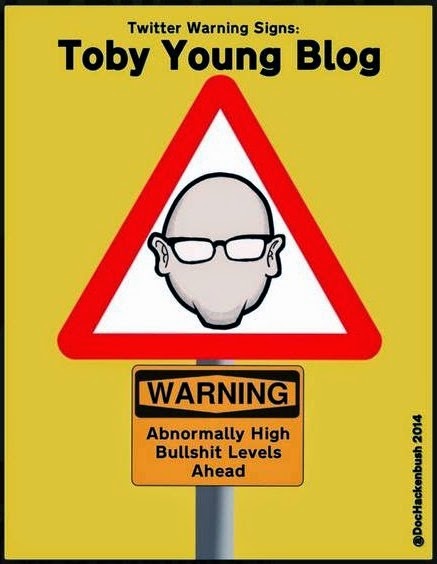 Laugh? I thought I’d never start. But this routinely lame dirge did prompt one thought to enter: Tobes is standing in an extremely draughty glasshouse when it comes to calling anyone else “weird”. How draughty might that be? You can answer that by scanning the wreckage of Tobes’ own seven weirdest moments. 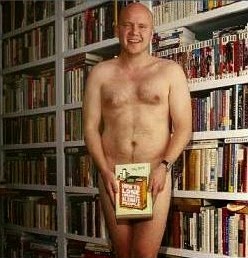 1 How To Lose Clothes And Alienate People Tobes posed naked, save for a copy of his dubious tome. Alongside that, anything that Miliband does automatically ceases to be even slightly weird. 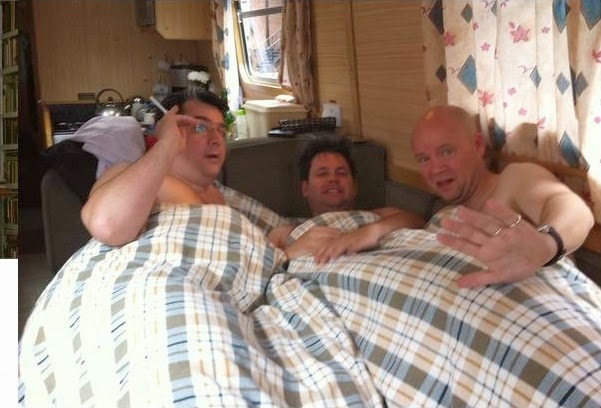 "No, no, think of my reputation" ... what reputation, Tobes?

2 Three In A Canal Boat Bed The camera caught Tobes, along with the perpetually thirsty Paul Staines and his tame gofer, the odious flannelled fool Henry Cole, in the same bed. That really is weird.

3 Rally Against Debt This event, promoted by the so-called Taxpayers’ Alliance as a counter to the TUC’s March for the Alternative, attracted a derisory 350 souls, including speakers, hacks and snappers. Tobes said it was a must-attend event. Then he failed to turn up. Yep, that’s weird all right.

4 Praising Thomas Hacker The first Headmaster of Tobes’ West London Free School (WLFS) was given his full and unequivocal backing. He lasted just over a year, was briefly kicked upstairs, and then was gone. Weird or what?

5 Praising Sam Naismith The second Headmaster of the WLFS was also given Tobes’ unequivocal backing. He lasted a year and a half, before exiting not mid-term, but midweek. Naismith had been running his own hockey academy on the school’s time, then pocketing the proceeds. Weird cost control there, Tobes.

6 The Saga Of Palingswick House The WLFS needed a permanent home, so to great fanfare, Palingswick House in Hammersmith was nominated and a target date for moving in was set. Two years ago. They still haven’t moved in, and in the meantime We The Taxpayer have shelled out more than £9 million for an office building to ease the accommodation pressure. Weird organisation, Tobes.

7 Over-Egging The Ofsted Visit The WLFS got a “Good” rating from Ofsted. But this was no better than all those supposedly rubbish schools in Ealing that Tobes had been slagging off. Weird comparison, eh? Yep, he’s weird all right.
Posted by Tim Fenton at 12:40

I seem to remember that he was pretty pathetic on Come Dine with me too.

Two images that I will have difficulty erasing from my mind. Thanks. If a picture is worth a thousand words, next time let us have the thousand words instead please.

You could add getting kicked off and banned from the film set of his own book for repeatedly pssing off/perving over Kirsten Dunst.