If anyone needed a demonstration of the way in which factual and rational discussion is shamelessly replaced by partisan politics in the right-leaning part of the Fourth Estate, the frankly pathetic attempts by some pundits to frame the “English Home Rule” question will satisfy their curiosity. To pontificate in the press, one need not know anything about what is involved. All that is needed is rabid bluster. 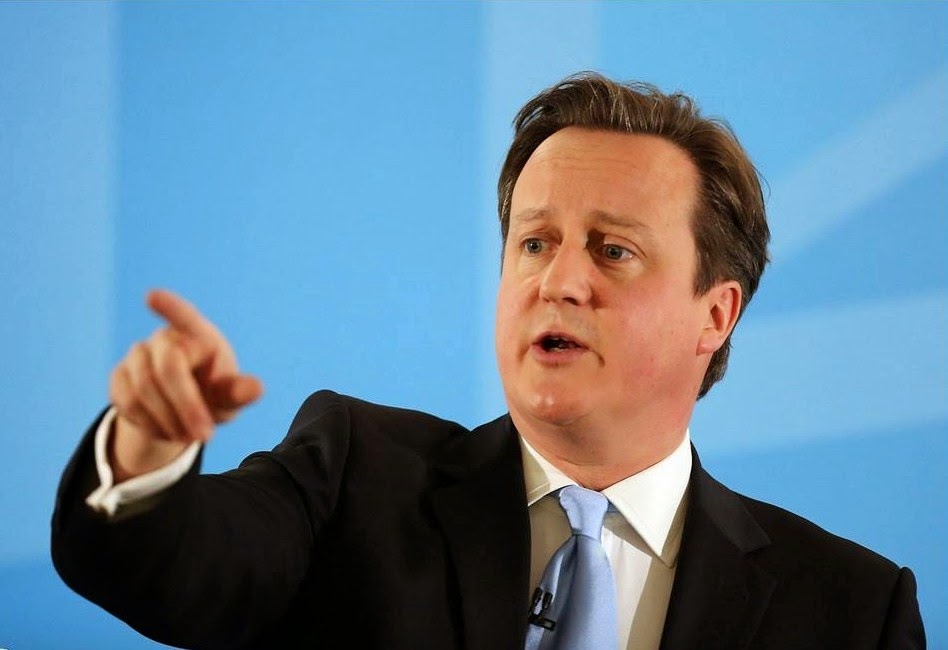 “Ed refuses to back English home rule 13 times!” howls the Mail. The Telegraph asserts “Miliband cornered over home rule”, while the Murdoch Times claims “Cameron wants vote on English home rule”. This is frightfully good stuff chaps, but when is someone going to define “English home rule” when we are part of something called the United Kingdom? 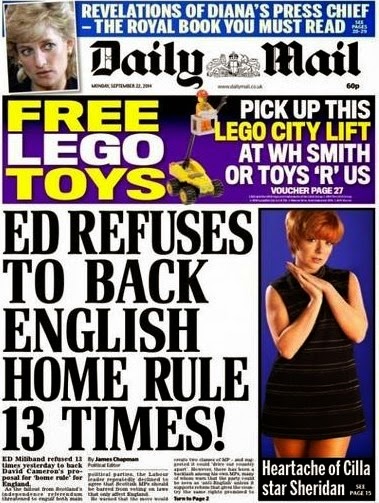 Perhaps they mean a devolution of powers in line with what has been transferred, and promised, to Scotland? But some of those powers (not all, though) have also been transferred to the Welsh Assembly Government in Cardiff. So what’s with the emphasis on Scottish MPs? And some powers, for instance, have been devolved to City Hall in London. Do London MPs get shut out, too? 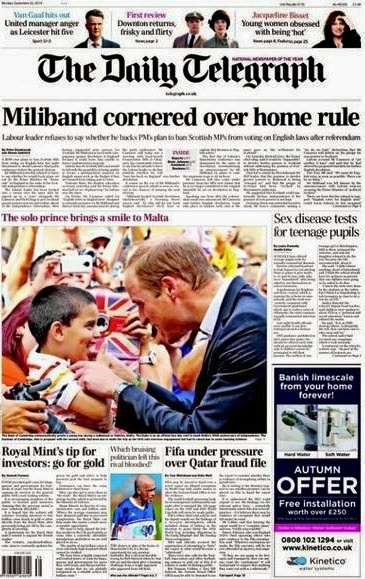 Even the narrative is inept: the Mail talks of “David Cameron’s proposal for ‘home rule’ for England”, and the Telegraph “plans set out by the Prime Minister for ‘home rule’ in England”. THERE ARE NO PLANS OR PROPOSALS. As a result, no decision has been taken on what powers will be devolved where. “English home rule” exists at present only as a device for Cameron to gain political advantage. 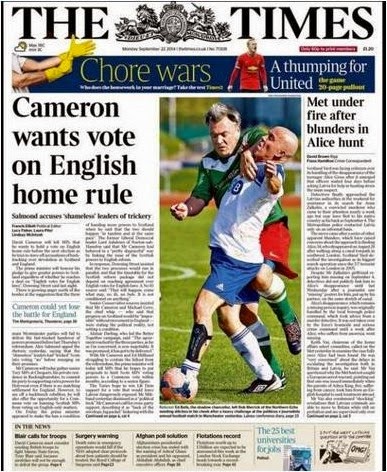 You think I jest? Consider what legal commentator Jack of Kent has had to say on the affair: “Enjoying watching those who support ‘supremacy of Parliament’ now trying to limit powers of some MPs with ‘English votes for English laws’ ... It appears Parliament is ‘sovereign’ and ‘supreme’ unless you are a Scottish MP, when somehow it isn’t ... Good constitutional logic there”. 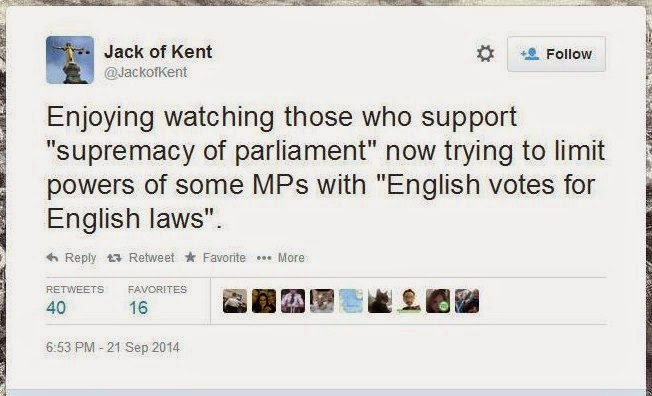 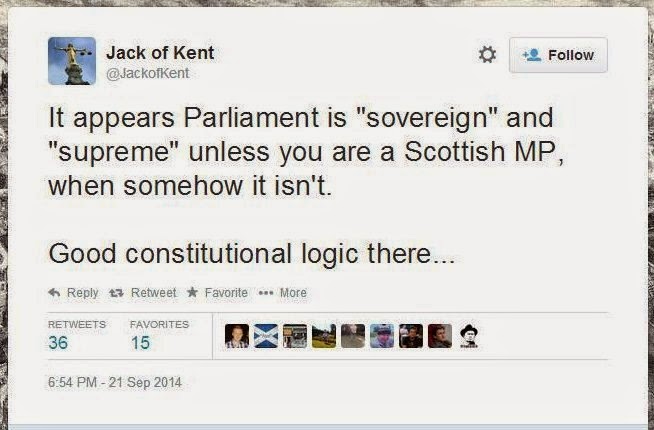 He went on “Either Parliament is ‘supreme’ or it is not; and, if it is, Scottish MPs can vote on what they want just like English and Welsh MPs can ... Parliamentary supremacy must mean all MPs are equal. But ‘English votes for English laws’ means some MPs will be more equal than others”. In other words, Cameron’s supposed proposals are going nowhere. They are just a way of kicking Labour. 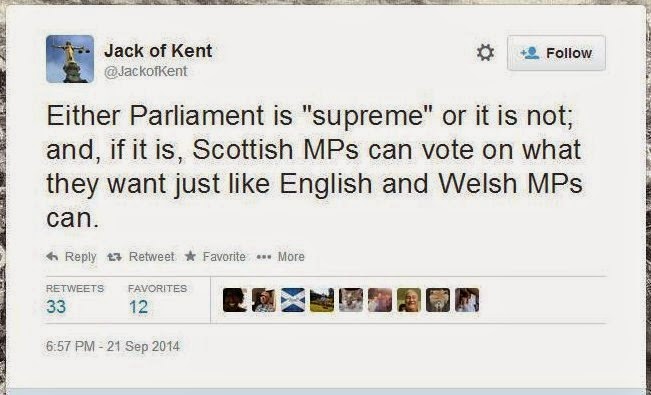 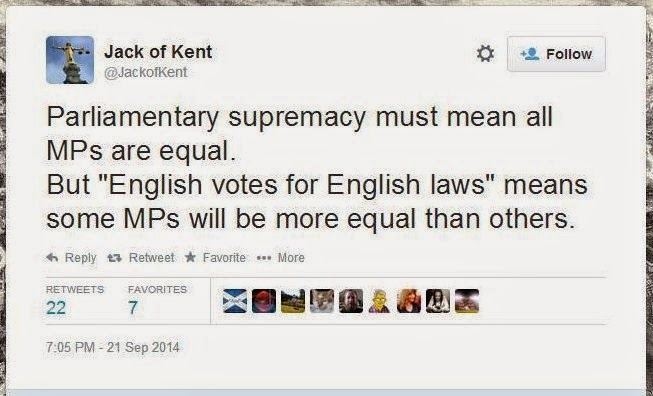 The way in which the right-wing press is misleading its readers – probably because its hacks and pundits can’t grasp the issues themselves – is as shameless as it is deliberate. And why this should be is clear: Labour saved Cameron’s skin on the Scotland vote, and the idea that Miliband could gain popularity and inch closer to 10 Downing Street as a result is scaring the press shitless.

So expect more of this crashingly inept punditry for the next eight months.
Posted by Tim Fenton at 11:11

The only reason the emphasis is on Scottish MPs and not Welsh ones is because 40 is a bigger number than 26.

Camerons idea for English home rule is nothing of the sort. English Home Rule would be England ruled by the English - all of them, wherever in England they are..

What he's working for is to ensure his little band of London based public school boys maintain their grip on control of the majority of the UK when the fringes get some freedom.

Power to the English Regions!

Shoe's on the other foot now and the labourites don't like it. Should have thought about that before doing the Tories bidding in Scotland. Reap what you sow.