The Staggers’ Media Mole noted yesterday that James “saviour of Western civilisation” Delingpole, recently appointed to the batshit collective that is Breitbart London, had changed his tune on the latest in the Grand Theft Auto series in his column for the Spectator magazine. What was merely touched upon, though, was the real reason for Del Boy’s apparently Damascene conversion. 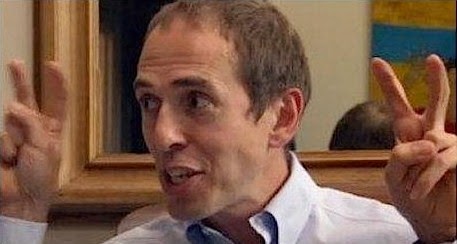 While reviewing GTA V for the Mail, Del worried about “what it says about the coarsening, the decadence and the hopelessness of our modern culture”, while in the Speccy it was “you can still act out your most politically incorrect fantasies without some professional victimhood group like 350.org or Everyday Sexism demanding you be carted off in the Outrage Bus for compulsory re-education”.

And there’s the switch: as Media Mole notes, this is about GamerGate, “an astroturfed outrage which claims to be about corruption in video games journalism, but which actually is a bunch of players railing against imaginary ‘social justice warriors’ polluting their pastime with ideologies like ‘feminism’”. Delingpole is using his Speccy article as leverage to drive traffic for Breitbart London. 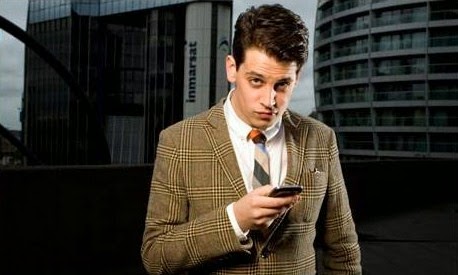 Look what the cat dragged in ... Milo Yiannopoulos

Media Mole closes by telling “It is also worth pointing out that Delingpole tells his readers to search for a number of - abysmal and hateful - pieces on GamerGate by a man he employs as a columnist at Breitbart, without disclosing their relationship”. Now who might that be? As if you need to ask: step forward the singularly repellent Milo Yiannopoulos, failed “entrepreneur” and amateur human being.

This eminently avoidable presence has indeed been busy on GamerGate, as witness “How Sloppy, Biased Video Games Reporting Almost Destroyed A CEO” (yes, there’s a “feminist activist” in there). Then he told of “a secret video game journalist mailing list” (obviously not, if he’s got it) “Some of whom attempted to bully their colleagues with it in an attempt to shape the news agenda for political purpose”. 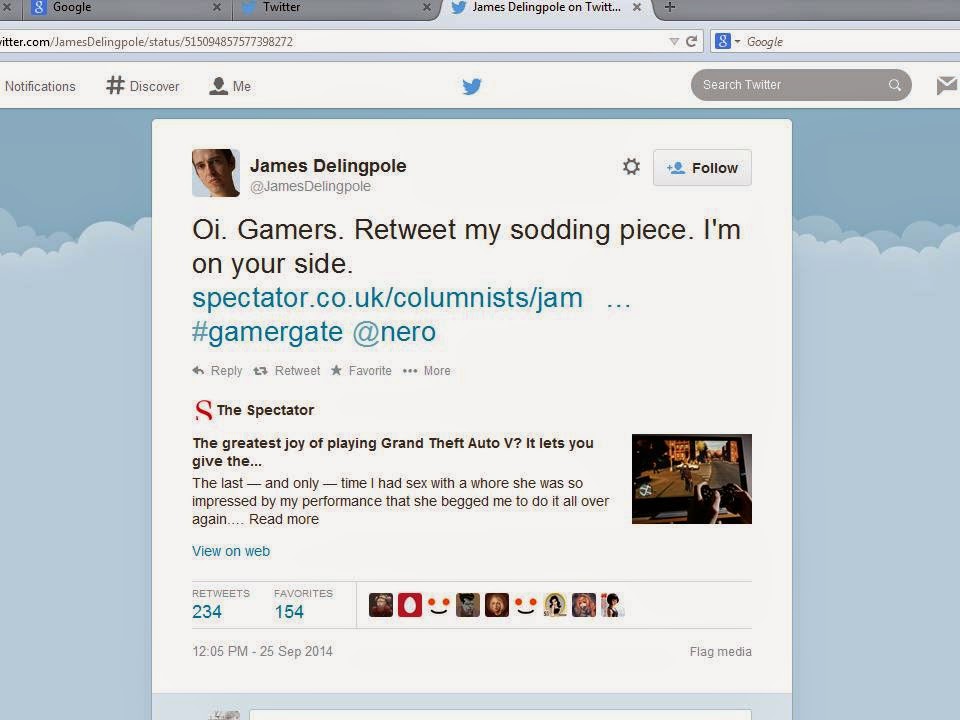 Yiannopoulos tells of “ideological co-ordination” and “activists [sic] members”, so those who look in on the batshit Breitbarts know what they are meant to think. He then claimed those on his list were saying “They’re on to us” (as if anyone gives a flying foxtrot what he thinks) and tells of “The #GamerGate hashtag, which has swept social media in recent weeks”. See, it’s really important! 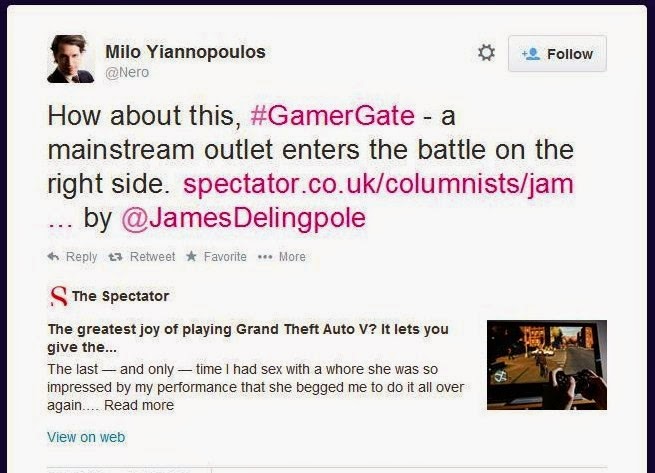 The reality, as Del Boy let slip on Twitter as he implores gamers to Retweet his Speccy piece, and Yiannopoulos says “look, it’s gone mainstream”, is that Breitbart London is desperately seeking clickbait. This is nothing more than another lame attempt to drive traffic: the venture capitalists who shelled out for the site to get up and running are not of charitable disposition.

One wonders if Fraser Nelson is comfortable with his magazine being thus involved.
Posted by Tim Fenton at 13:33

But there actually was a mailing list of over 150 journalists, with whole threads devoted to coming up with a party line on controversies, and people being pressured to conform to those party lines. Like, it literally did actually happen. The mailing list has a genuine thread titled "They are onto us" in which members of the mailing list discuss how to best kill the story that this list exists.

Does this make it some kind of corrupt activity, or is it merely a mailing list shared by a number of like-minded people?

Have a think about it, Master Yiannopoulos. And next time, own up and use your actual name.

Read the email dump and the reconsider your comment

If you are telling journalists and editors from a competing publication how to cover story, then yes, that is a demonstrable and unambiguous act of corruption.

This article is bloated on rhetoric and starved of facts.