As I noted last week, driver and rider matching service Uber has cut prices on its UberX offering – which is most of its presence in London – by 15%. This has meant their drivers have had a 15% pay cut imposed upon them. But, I have been told by ConHome’s Mark Wallace, “[Uber] drivers work for themselves under better conditions with a better income”. Better than what? Don’t ask.

Perhaps those drivers are happy to take the hit, having been told that the price reduction will bring them more trips? After all, Wallace and all his fellow Clever People Who Talk Loudly In Restaurants use the service and suggest that the drivers are content with their lot. So I decided to find out just what some of them really thought about the pay cut – both in London and Los Angeles.

Here’s what the Uber Driver London blog had to say: “UberX drivers make up the majority on the Uber London platform. They not only play a part in making Uber what they are today but also accept the lowest minicab fares in London ... Many drivers have made the commitment on hiring, financing and leasing cars which they can’t just stop paying, so they’re in too deep to leave”. A point I made previously.

Another point I made is underscored: “I agree with @UberDriversClub that we as UberX drivers have helped build a beast that we cannot control ... This to me means more miles on my car, more petrol, more unpaid waiting time, more unpaid cancellations, higher risk of accidents and possibly risk of more PCN’s [fines]”. The drivers have to like it or lump it. They have little alternative. 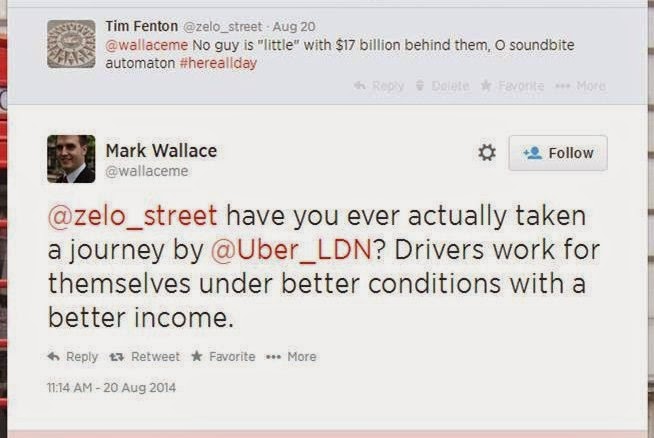 Still think this is true, Wal?

It’s little different across in LA: one contributor to UberPeople.net was similarly unimpressed. “I've been driving for Uber since December, and this is the third pay cut I've seen ... Driving at the new rates is a nightmare. One $4 fare after another, and with each of them, I'm just thinking, ‘This should be $6-7, and just last week, it was.’ It adds up or, more properly, really doesn't, very fast”.

She concludes “I honestly don't believe that Uber cares” but realises that getting together with other drivers is well-nigh impossible: “In my eight months with Uber, I've met maybe three other Uber drivers in person, and those were all by chance”. Plus many drivers are scared to do anything for fear of not being able to find work elsewhere. They become prisoners of the app.

This is not about free market competition. It is about killing competition stone dead.
Posted by Tim Fenton at 17:27

My dad was a driving instructor for 25 years. In the early days he needed custom, so offers and low hourly rates was always a temptation because he would in theory get more customers so would do more hours and earn more. This is the Uber argument, if you are cheaper you are busier.

This falls down because there is always a point where fixed costs can't be covered no matter how many trips you do.

This is how Uber work. They don't care about individual drivers. They will come, work for a few months, realise they can't make money and move on to allow the next mug to lose money, but Uber still make money as their cut is never jeopardised.

"So how’s that “better conditions with a better income” looking for Wallace and his pals?"

Of course, the usual way of doing this is 'join a union' rather than 'join an avaricious, powerful organisation dedicated to profit making'. Mr. Wallace is, as ever, somewhat ignorant of labour history and economics.

UberX is Uber's cheapest option. Drivers drive their own cars, which are non-luxury sedans.