We are told that the days when black players were subjected to the taunt of “monkey”, and “fans” did monkey impressions and threw bananas at them, are in the past, or at least confined to Italy. Here in England, we have accepted teams that reflect a multiracial and multicultural background, and can be assured that all that gratuitous racism is a thing of the past. 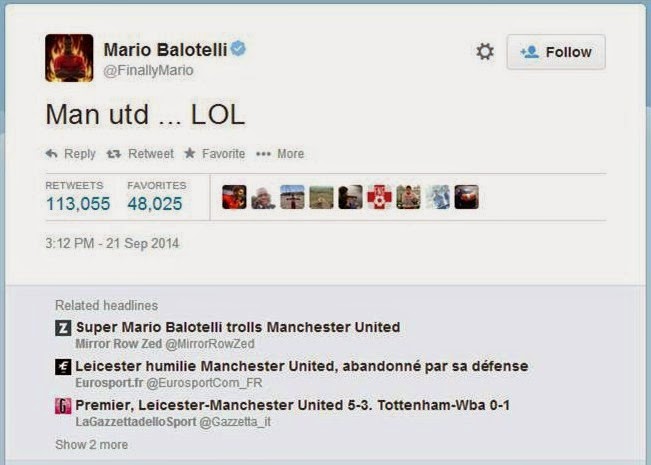 Well, have I got news for you: when Mario Balotelli, formerly of Inter Milan, Man City, A C Milan and now at Liverpool, took to Twitter to show his amusement at Man United’s defeat at Leicester this afternoon, all hell broke loose and the striker was subjected to a veritable tsunami of racist bile. There was screen after screen of it: one did not have to go looking very far. 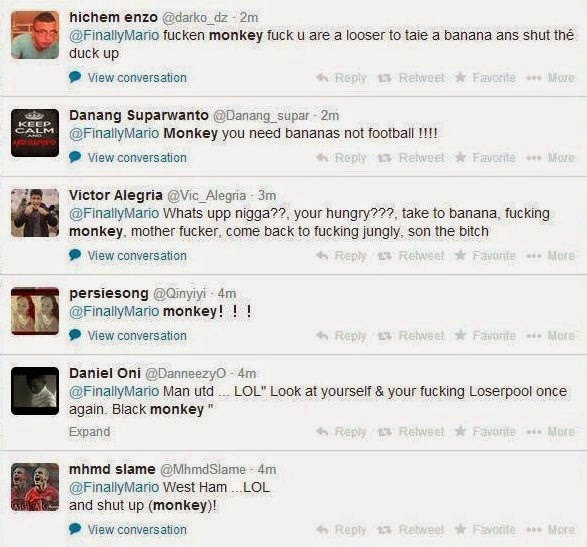 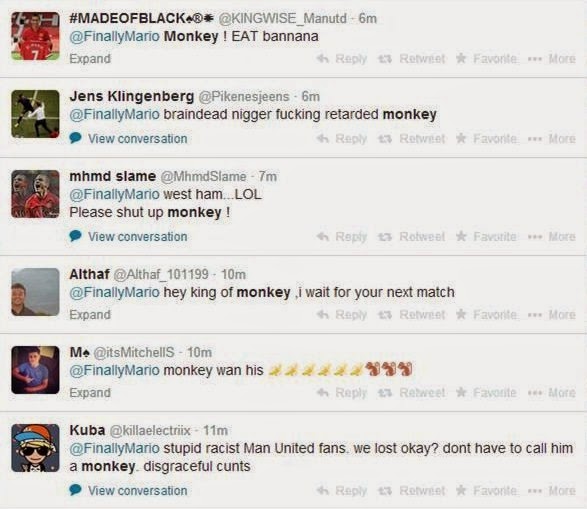 Just filtering the abuse on the word “monkey” produced hundreds of Tweets. Many were grammatically and linguistically inept; this did not stop some using terms such as “retard” in addition. There were banana and jungle references. 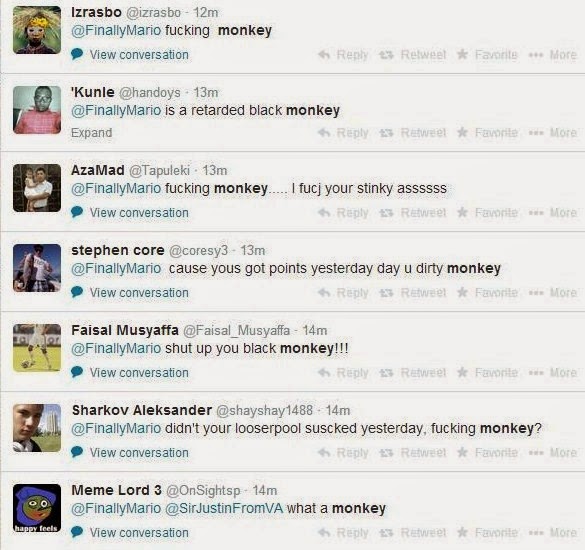 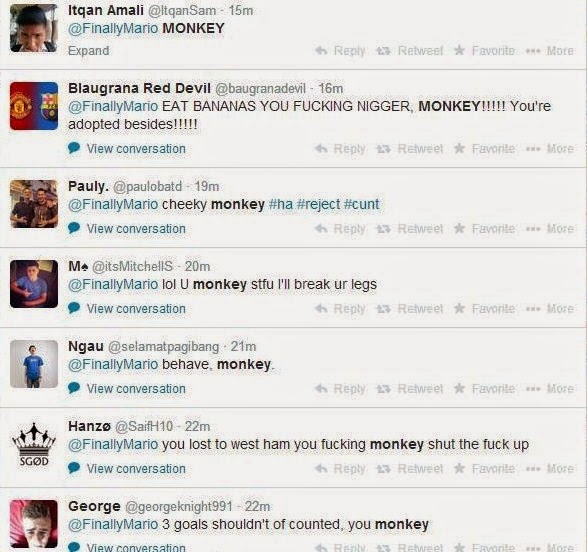 Also in abundance were variants on the N-word, along with MF and “bitch”. The more creative abusers included banana graphics. Occasionally there was a reply pointing out the racism. This did not stem the tide. 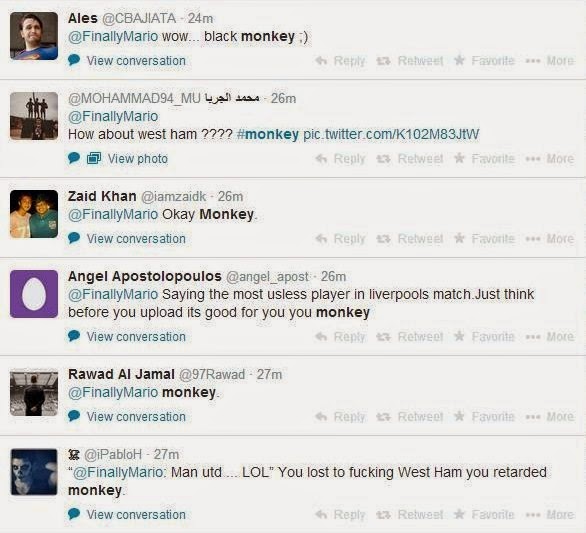 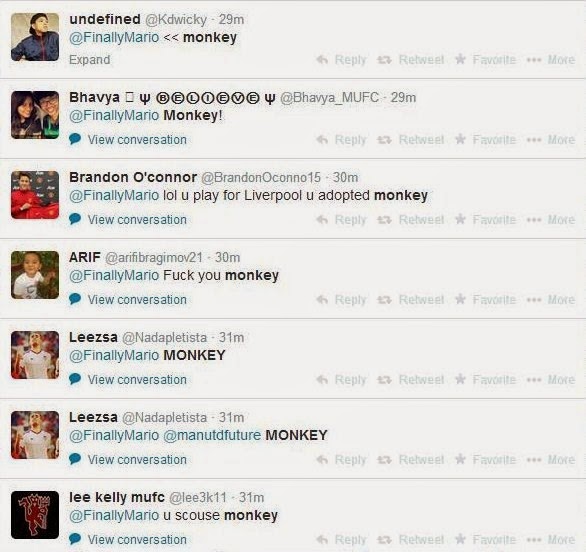 Along the way, derogatory references to Balotelli’s family history were posted. Others made references to hygiene. The player was accused of being a Scouser (er, no) and there were generous applications of the F-word. 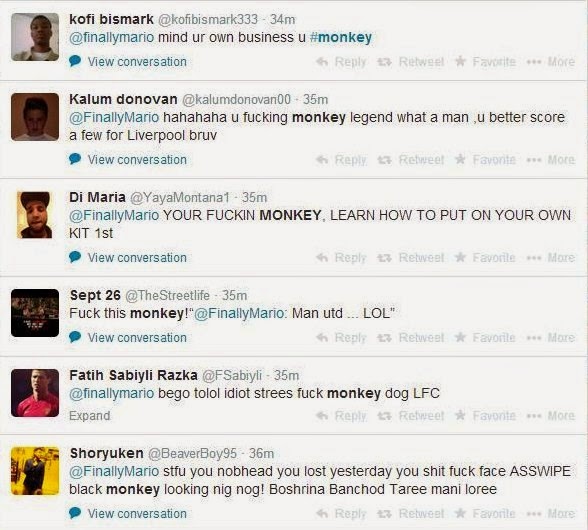 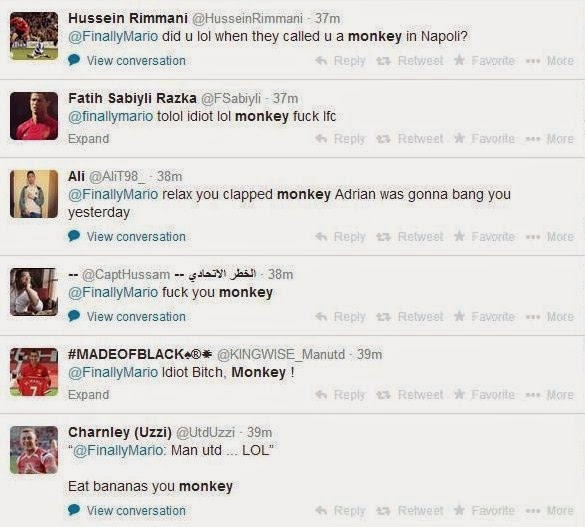 One “fan” considered that it was not Balotelli’s business to pass an opinion, while another worked the word “dog” into a Tweet. Another gave the impression they used to watch Love Thy Neighbour. The obligatory Napoli reference was included. 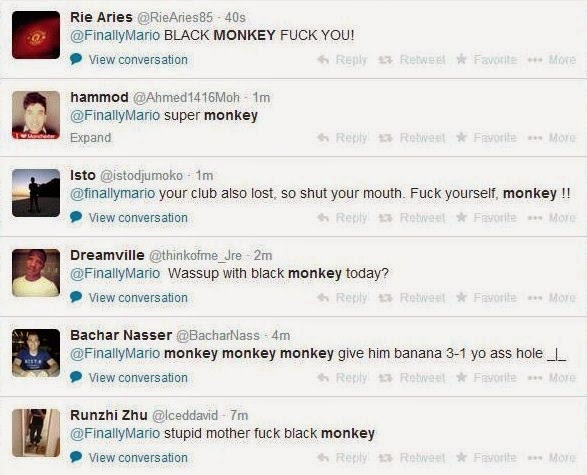 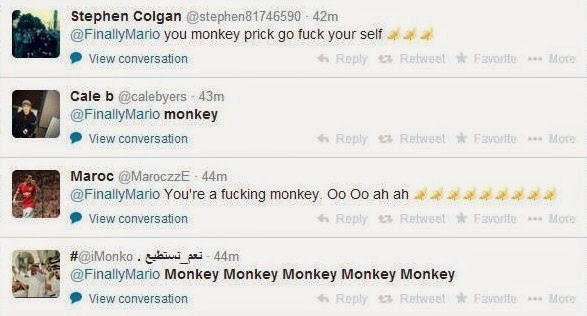 On and on flowed the tide of, one has to say it, filth. This included references to sexual violence and a variety of body parts and extremities. As Retweets of Balotelli’s brief Tweet piled up, so did the abuse.

And what came clear was that none of those dispensing the abuse seemed in the least bit concerned. Now, no-one wants to see social media censored, but this is verging on the totally inexcusable. It’s blindingly obvious that racism in and around football has not been stamped out – it’s just been driven out of the grounds, and away from the buses, coaches and trains, into peoples’ homes.

What Mario Balotelli was subjected to was bang out of order. Full stop, end of story.

[UPDATE 2040 hours: the Echo has reported that Merseyside Police have begun an investigation into the slew of abusive Twitter comments directed at Mario Balotelli.

As a result, I have contacted them and made available the Twitter extracts used on this blog post. There is no place for this kind of behaviour, not just in and around football, but anywhere. Full stop, end of story]

" it’s just been driven out of the grounds, and away from the buses, coaches and trains, into peoples’ homes"

Surely that should be the other way round? It starts at home passed on by parents and then it gets carried on at school and then played on by certain politicians and extremist groupings. Football has done quite a lot in recent years to try and get rid of it at grounds but it's a society thing and like much handed down by previous generations will be hard to eradicate altogether.

Reminiscent of the vile abuse Stan Collymore received for calling a Liverpool player a diver or Patrice Evra received for being racially abused on the pitch. Neither of which I recall you covering. Both of which were from Liverpool fans.

Let's keep the football partisanship out of this please. If morons giving out racist abuse is disgusting now (which it is) then it was disgusting then and should have been given due prominence.

I'm all for freedom of speech so I wouldn't want anyone jailed but give them all football banning orders and they need to grow up if a bit of football banter reduces them to such statements.

This is not about "football partisanship". The idea that "you must cover what I want you to cover or your contribution is invalid" is noted.