The tendency of Sun columnists to slip in the odd bit of Islamophobic incitement will be familiar to Zelo Street regulars: only last Sunday, the weekend witterings of former Tory MP Louise Mensch, trying to rabble-rouse in the wake of the Rotherham child sex exploitation scandal, passed before my inspection. That was bad enough; today’s front page splash was yet worse. 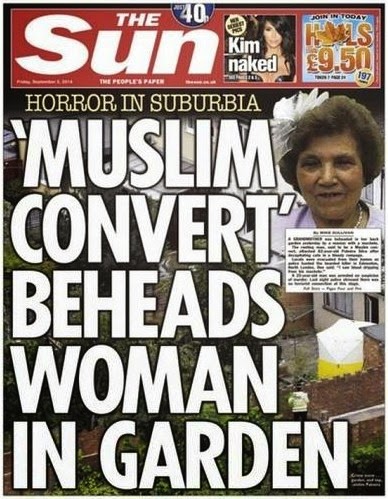 First the more prosaic telling of the story: an 82 year old woman called Palmira Silva died yesterday in the back garden of her home in the north London suburb of Edmonton. It has been alleged that she was beheaded, although the Police “were unwilling to speculate on the nature of her injuries or the type of weapon used ... A 25-year-old man was arrested on suspicion of murder”.

The suspect was later identified: “The man, named by the Evening Standard as Nicholas Salvadore, 25, was an aspiring cage fighter given the nickname ‘fat Nick’ because of his ‘huge frame’” told the HuffPo. Now, the Sun has significant previous with men who are big and black, as we remember from their treatment of Winston Silcott. So what happened next should have surprised no-one.

Someone claimed Salvatore had converted to Islam last year. Or perhaps it was last April. Anyhow, there was an “insider” who knew all about it. And so it came to pass that the Super Soaraway Currant Bun splashed “Horror in Suburbia ... ‘MUSLIM CONVERT’ BEHEADS WOMAN IN GARDEN”. Yeah, it was about more of those Scary Muslims! Strangely, he hadn’t taken an Islamic name.

But this was a minor point: what soon became clear was that the Sun knew that the headline would provoke a backlash, and so, when it did, “The Sun's Head Of PR, Dylan Sharpe, pointed out ... that other publications were now also reporting on the murder with similar headlines”. Yes Mr S., that’s the press’ herd instinct kicking in, as you know. Sharpe was not the only one scrambled to the defences.

Over at the Guido Fawkes blog, newly anointed teaboy Alex Wickham berated the HuffPo for debating the issue, or, as he put it in his own inimitable way, “endorsing Twitter abuse”. And then the rest of the Murdoch empire began to transmit the Sun’s story: “London woman decapitated by alleged Muslim convert” trumpeted the Herald Sun’s blog. So that’s all the way to Oz in a jiffy.

Fortunately, this unverified claim has not yet found its way to Fox News Channel (fair and balanced my arse). But this may be only a matter of time: the Murdoch empire’s tendency to Islamophobia is disturbingly real. And rebutting criticism with “someone else is running the same story” is disingenuous, especially if the someone else got the story from the Murdoch press in the first place.

Right now, we do not need incitement. The Sun is bang out of order.

[UPDATE 6 September 1225 hours: today's Sun has begun the process of moving the "Muslim convert" angle down the agenda, as can be seen from the paper's front page. 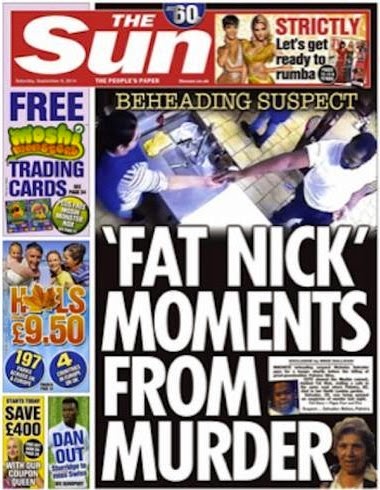 "FAT NICK MOMENTS FROM MURDER" it proclaims. The assertion that Nicholas Salvador had converted to Islam is still there, but now you have to look at the small print.

Give it time - by next week, it may have vanished altogether. But that is not the point: the intent was clear yesterday, and the damage has been done. As Creepy Uncle Rupe would have wished]
Posted by Tim Fenton at 17:26

Metro News is spreading Facebook shit about 'Peppa the Pig'. Local newspapers owned by the same group are reporting the same.