After Mark Rowley, the retiring head of counter-terrorism at the Metropolitan Police, used a speech to warn about the rise in far-right terrorism, and named people like Britain First deputy leader Jayda Fransen and former EDL main man Stephen Yaxley Lennon, who styles himself Tommy Robinson, the reaction was instantaneous. Lennon declared that he would “find” AC Rowley, and fired off a series of Islam-bashing Tweets.

As a result of this, a number of complaints were made to Twitter. And overnight, Lennon’s account has been suspended, not for a few hours, or a day, but for a whole week. He is now limited to sending DMs. He cannot send Tweets, Retweet anything, or perform Likes or follows. It is, apparently, not the first such suspension that has been handed down to Lennon. But what is certain is that it will, in the retelling, not be his fault. 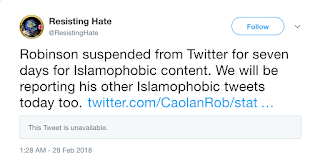 That is despite making a direct threat against a senior serving Police officer, and then making a number of claims about him which are, at the very least, questionable. And his way of establishing another channel of communication may not last long.

Lennon’s former side-kick Caolan Robertson, who is busying himself promoting pro-am Motormouth Katie Hopkins’ favourite subject, the claim that white farmers are being disproportionately attacked, injured and even killed in South Africa, has taken time out to help his old friend. He has decided to lend Lennon his Twitter account. 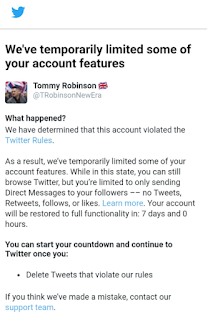 “Tommy has just been banned for 7 days on Twitter for tweeting THIS. With him now & he will be sending tweets via this account until his is restored” told Robertson late yesterday. This was picked up by Lennon’s followers, one of whom responded “Tommy @TRobinsonNewEra Robinson got a 7 day Twitter ban (according to @CaolanRob http://archive.is/m4zlh)”, then went on to claim “What was Tommy banned for? He was banned for stating a fact”, although the link is not a reliable source. Again. 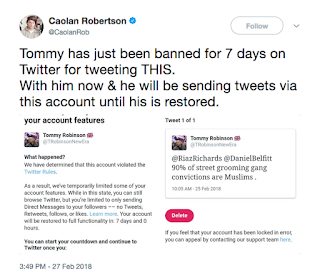 And while the highly sound Resisting Hate people have Tweeted “Robinson suspended from Twitter for seven days for Islamophobic content. We will be reporting his other Islamophobic tweets today too”, that point about Lennon’s new communication channel not lasting long needs to be revisited: using Robertson’s Twitter feed to get round his suspension is against the Twitter terms and conditions. Oh dear! 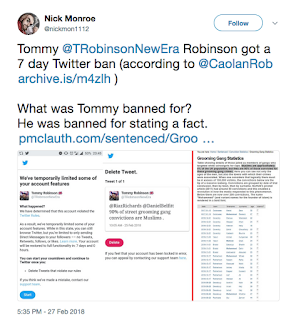 What also needs to be borne in mind, and not just by Lennon and his followers, is that Twitter is a company which is well within its rights suspending access for those who it considers are running (for instance) hate speech campaigns. And if that company could ban the likes of Milo Yiannopoulos for life, they will have no compunction handing the likes of Stephen Yaxley Lennon a seven day suspension.

Moreover, those opposed to Lennon’s brand of alleged hate speech are free to make representations to Twitter, and indeed any other social media provider, objecting to the content he is putting out there. All are allowed to practice free dissenting speech.

So this may not be the last suspension Stephen Yaxley Lennon experiences. The solution to his problem is straightforward, and is in his hands. That is all.

Given the current atmosphere on terrorism, I'll be truly surprised if "Robinson's" threat doesn't lead to at least a vigorous interview by the bizzies.

Surely this cannot be disregarded?

But I do admit to being wholly biased in this: I hope the racist prick gets slammed up for a very long time.

There is no evidence he threatened the officer. He said he was "Going to find him".

Police are pretty abysmal at interpreting things as threats. One tried it on with me yesterday.
That wont help them either.