After the attempts by the right-leaning part of our free and fearless press to leverage the highly suspect evidence of a former Czech diplomat and smear Labour leader Jeremy Corbyn as some sort of Soviet agent collapsed in ignominy last week, and Tory vice-chairman Ben Bradley was forced to apologise for blatantly libelling Jezza, there was a need for The Blue Team and its cheerleaders to pull something from the rubble. 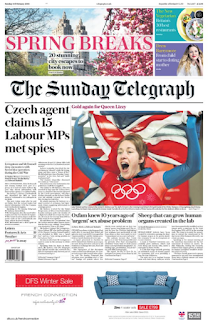 The Tories had been shamed; their lack of membership meant they were having to recruit a paid Twitter “troll army” to shill for them. But all was not lost: at the increasingly desperate and downmarket Telegraph, help was at hand. 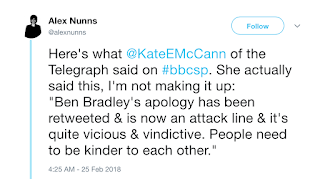 The new approach was launched on the BBC Sunday Politics, as Alex Nunns noted. “Here's what @KateEMcCann of the Telegraph said on #bbcsp. She actually said this, I'm not making it up: ‘Ben Bradley's apology has been retweeted & is now an attack line & it's quite vicious & vindictive. People need to be kinder to each other’”.

A Retweet is now “vicious and vindictive”. Ms McCann was quick to play the victim in response to Nunns: “The point I was making - albeit a little scruffily - was I don’t see why everything has to be so vicious. It puts people off politics and it’s unedifying on all sides. Your tweet attacking me only reinforces that point”. It was the Rotten Leftie’s fault! He simply replied “I look forward to your public condemnation of your newspaper's vicious campaign against the Leader of the Opposition based on a single discredited source”.

But Ms McCann was not done with the victimhood: “All you’re seeking to do with that tweet is direct nasty messages to someone you don’t agree with. You’re not engaging, you’re grandstanding - and I think that’s snide and damaging to decent political debate”. 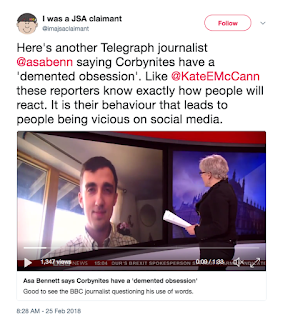 Another Tweeter had noticed a pattern forming: “Here's another Telegraph journalist @asabenn saying Corbynites have a 'demented obsession'. Like @KateEMcCann these reporters know exactly how people will react. It is their behaviour that leads to people being vicious on social media”. Indeed. And a third Tel voice was in on the act. 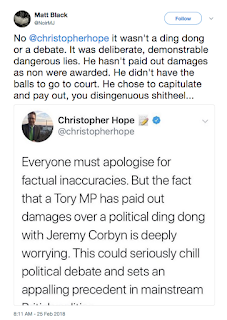 Christopher “No” Hope Tweeted “Everyone must apologise for factual inaccuracies. But the fact that a Tory MP has paid out damages over a political ding dong with Jeremy Corbyn is deeply worrying. This could seriously chill political debate and sets an appalling precedent in mainstream British politics”. Pick the dishonesty out of that one. 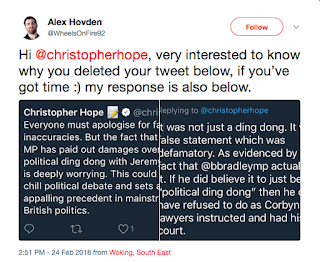 It wasn’t a “ding dong”, no damages were paid, and no precedent was set, as Matt Black pointed out in his own inimitable style. And Hope, being of less than perfect courage, deleted his effort, leaving Alex Hovden to ask why he had done so. But there was no reply. 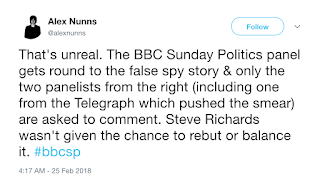 Worse, Sunday Politics is again not looking too clever over its enabling of the Tel’s smear and victimhood agenda, as Nunns noted: “The BBC Sunday Politics panel gets round to the false spy story & only the two panelists from the right (including one from the Telegraph which pushed the smear) are asked to comment. Steve Richards wasn't given the chance to rebut or balance it”. The “commentators who count”, eh?

The Telegraph’s campaign to moan about nastiness while ramping it up is so blatant, the BBC should be calling them on it. Sunday Politics is not doing its job. Again.

Presumably, this isn't the same Telegraph which previously employed spies who were booted out of the UK diplomatic service.

Mr Pot-Black? May I introduce you to your new neighbours, the Kettles...

Anybody who even now thinks the BBC News/Politics agenda isn't at least right wing ought to view tory Kuenssberg's "interview" today of Jeremy Corbyn. The crooked mouthed Yankified woman is a disgusting corruption of journalistic fairness and decency. She's as rotten to the core as Neil and all the other tories. None of them can be trusted one millimetre.

Bradley's apology tweet ended with the request "Please retweet". I expect that Corbyn’s lawyers insisted. They probably wrote the apology for him.

The Daily Telegraph can talk: it had one spy on its books and the only MP that was definitely a Czech informer was Ray Mawby.