Sometimes the opposition comes riding to your rescue, and for those of us who have pointed out time and time again that the Press and Pundit Establishment is divorced from real world reality, it has come galloping today in the shape of the alleged doyen of Sunday political pundits Tim Shipman. Shippers has shipped so much bull in his front page lead today that it has all become rather too obvious. 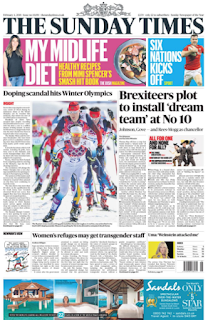 “Brexiteers plot to install ‘dream team’ at No 10 … Johnson, Gove … and Rees Mogg as Chancellor” proclaims his headline, demonstrating the disconnect between the hermetically sealed bubble in which the press operates, and the world outside. While Shipman gets his back slapped by his fellow hacks and pundits, the only way the average floating voter will be moved is to vote for someone other than the Tories.

One extract from the supporting article shows how deluded this idea is: “MPs called for a Brexit minister to be permanently stationed in Brussels, to keep an eye on officials, with former cabinet minister Iain Duncan Smith touted for the role”. Duncan Cough is so inept, he could not organise an act of alcoholic derangement in an EU wine lake. His presence in Brussels would make the UK an even greater laughing stock.

So let me put Shippers and his chums at the Baby Shard bunker straight: Bozza may be one of theirs, a journalist, albeit not a particularly good one, but a completely useless politician. His time as Mayor of London was a disaster which is slowly but inexorably catching up with him. He is a congenital liar. He is totally without principle, a flimflam man. He cannot be trusted to open his mouth and not put his foot in it. 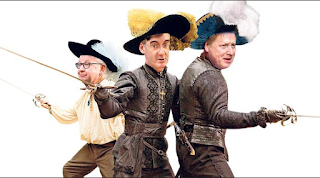 All for one, and for oneself

Michael “Oiky” Gove may be the official Minister for Murdoch, but his track record has been little short of disastrous. His tenure as Education Secretary was only brilliant when viewed through the warped prism of his fellow journalists. He is, to mangle a Stateside traffic warning, prone to be slippery when pissed. And being subjected to an attack by Gove is no more credible than being assailed by Elmer Fudd.

Jacob Rees Mogg is by degrees worse: a faux “gentleman” who last week allowed the mask to slip and show us he is just another who is prepared to lie through his teeth when the news becomes inconvenient. He was the only MP to vote against the Dubs amendment, showing a total lack of compassion for the real children in need.

On top of all that, consider this: at a time when male misbehaviour is finally being called out, the Murdoch press is putting forward a potential Prime Minister who can’t keep his trousers zipped up. When sponging off the public purse is yet more frowned upon, they are pushing for an unrepentant expenses cheat to be deputy PM. And voters will not respond well to the rich and out-of-touch, like Rees Mogg, being foisted on them.

Every aspect of this alleged “story” contains zero credibility. Never mind getting outside the M25, many in London will look at the idea of Bozza, Oiky and the Moggster running the country and just tell those proposing it to shove their stupidity.

Shippers has shipped just a little too much bull this time. No surprise there, then.
Posted by Tim Fenton at 10:53

Ah, the dream team - the educated idiot, the slithey Gove and the slimy amphibian. More a dystopian nightmare methinks.
Still, they are eminently qualified liars, cheats and back-stabbers. Nice to see the level of loyalty when the cat's away.

You think that's a silly story?
Have you seen the front of the Sunday Depress?
Apparently Corbin uses a (government provided) car, and that's bad... for some reason. Probably to do with Commies, Marxists, or Venezuela, I didn't actually read it obviously.

I don't know about Venezuela culpability, but you can bet the Russki government had something to do with it. Just as they're "interfering" in the, er, "American Dream".

If they can interfere in said "American Dream" they can "interfere" in any "British Dream".

Is there anybody out there with their head on their shoulders and facing the front who actually believes any of the utter, utter shite churned out by Murdoch/Rothermere propaganda clerks?