Fewer recent events have given the right-leaning part of the Press and Pundit Establishment as much to chew on as the collapse of a huge redevelopment scheme in the London Borough of Haringey. The rejection of what was called the Haringey Development Vehicle has seen accusations fly - and the Murdoch press send one of its shilling takers to propagandise and frighten the readers over more Rotten Lefties (tm). 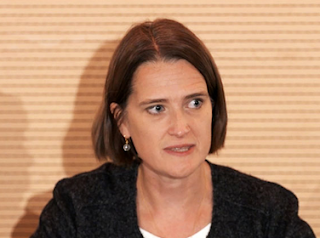 That shilling taker is Rachel Sylvester, who has brought forth the magnificently dishonest and delusional column titled “Hard left are just as bad as Marie Antoinette … Privileged, out of touch and patronising - Momentum merely pretends to have working people’s [sic] best interests at heart”. Observers of the Murdoch mafiosi will note the use of the “Hard Left” characterisation so beloved of Fox News Channel (fair and balanced my arse).

Ms Sylvester pitches the usual dog-whistles: “leftwingers who have taken over the Labour Party” [Labour IS a left-wing party] is accompanied by the false conflation of “regeneration” and “gentrification”, and departing Haringey council chief Claire Kober, who left of her own volition, is described as having been “forced out”. Then come the real smears.

Readers are told that “most of the residents of the crime-ridden, crowded estates who stood to benefit from the [HDV] support it”, but “it is being blocked by members of the left-wing pressure group Momentum who themselves live mainly in leafy middle-class streets” (no citation is provided, and none will be). At the end of the piece, this status has been escalated to “the comfort of their own, lovely, inherited homes”. Sneering, much?

And this paragraph captures the level of deceit being practised: “Leaflets were distributed claiming that families would be forced to move out of London if the regeneration project went ahead, even though the council had given every resident a legal right to a house in the new development”. Compare and contrast with the facts.

As Aditya Chakrabortty has pointed out in a piece for the Guardian, “The [HDV] policy set no explicit target for social housing”. All he could extract from the council was “a promise that 40% of new homes built would be ‘affordable’ - a term that in London means its opposite, given the sky-high market rates”. A “legal right” to something unaffordable.

He also makes this telling observation: “The Tory press and the Labour right, however, are already painting [Claire] Kober as a martyr to the Trotskyites - a band that apparently includes David Lammy MP and the local Lib Dems. They claim her exit is an affront to democracy, when Kober and her enforcers ignored two council scrutiny reports calling for an immediate halt; arranged secret meetings with Lendlease, and disciplined Labour councillors who challenged them in public”. What you will not read in the Times.

What you will also not read is that, as Chakrabortty previously pointed out, the challenge to the HDV came not from Momentum, nor anyone else aligned with Jeremy Corbyn, but a local pensioner whose legal costs had been largely crowdfunded - by his neighbours. By people in those estates that the HDV would have seen flattened. The area’s two MPs were opposed. The HDV business plan made no mention of “social housing”.

As an example, he observes “On Northumberland Park, one of the first estates earmarked for regeneration under the HDV, more than 1,000 social-rent homes face demolition. Their replacement is just over 5,000 homes - the vast majority for sale or rent privately” before adding the warning note “the plans make no explicit provision at all for social-rent housing. Lendlease [the development company in the HDV], to remind you, bulldozed nearly 1,200 social-rent homes on south London’s Heygate estate and built just 82 in their stead”.

What does Ms Sylvester say in response to the mass of evidence that writers like Chakrabortty have built up? Ah well. She has found a Haringey council resident who has told her on the record that “do-gooder left-wingers” had “celebrated with champagne” when the HDV was scrapped. This resident also conveniently uses phrases like “virtue signalling”, just to make Times hacks feel right at home.

There is, to no surprise, no check that anyone drank champagne, sparkling Saumur, Asti, Prosecco, Cava, or maybe just went down the local Spoons and had a pint of Abbot. But there is a reference to the Militant Tendency, even though the opposition to the HDV came from locals. Like the pensioner who crowd-funded his costs, and had a kitty of around £5,000. Haringey Council had around £90,000 on call.

And how much the developers were prepared to throw out, in order to squash the little people, can only be imagined. But none of this matters to Rachel Sylvester: she has taken the Murdoch shilling, she has her instructions, and has delivered accordingly.

Whether this qualifies as competent journalism, well, you might wish to ask that. I couldn’t possibly comment.

Yet one more example of New Labour treachery. Bomber Benn, Mad Mann and co lined up with the tories and their monopoly owned lying media.

I think she has made a totally accurate statement when she says “most of the residents who stood to benefit from the [HDV] support it"....ie the number of people who will benefit being about zero.