UKIP - Why The Chairman Went

Another day, another departure from the clown car that is UKIP has been announced, to no surprise at all. As Sky News has reported, “UKIP chairman Paul Oakden to quit after leadership vote … UKIP has announced it is losing another senior official - just days before a key vote which could see its leader booted out by members … Paul Oakden, who has been chairman of UKIP since 2016, will step down from his role after the extraordinary general meeting which will determine Henry Bolton's future on Saturday”. 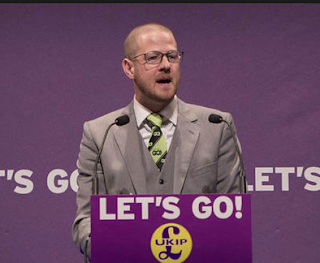 And so he did

So why might this be? “A senior party member told Sky News that his contract expired at the end of January and Mr Oakden decided not to renew it, because it was ‘time to move on’ … The source said Mr Oakden told the party's leadership of his intentions to quit 10 days before an email was sent in which he was inadvertently referred to as UKIP's ‘interim leader’ … He was forced to clarify there ‘hadn't been a coup’”.

The report gets a little closer to the reason Oakden left when it tells “It follows the resignation of UKIP's long standing and well respected head of media, Gawain Towler”, but neither the broadcasters, nor our free and fearless press, have twigged why both Towler and Oakden had little alternative but to leave the sinking ship.

The Evening Standard ventured “Ukip chairman Paul Oakden quits as party descends further into chaos”, the Independent went with “Paul Oakden resigns as Ukip chairman as party chaos deepens”, and the Mail offered readers “Ukip's party chairman Paul Oakden dramatically quit his post tonight but insisted to party members it was not an effort to force out Henry Bolton as leader”. None of them got it, and the Mail was way off target.

So why did Oakden decide the game was up, and indeed make his decision irrespective of what happens to Henry Bolton (and his interestingly constructed CV)? Simples. Both he, and Towler, had to go because UKIP is on its uppers. The party is so skint that it is now having to offload staff because much of its funding has dried up.

Many of the party’s MEPs - not just Nigel “Thirsty” Farage - have had their salaries stopped while the European Parliament recoups money that they fiddled in expenses. The investigations by the EP’s OLAF fraud unit continue, so there could be worse to come. On top of that, the Kippers’ EP grouping ADDE has lost its funding and is effectively defunct, as is UKIP-linked “think tank” IDDE. More money not being passed down to UKIP.

And that is why Bolton thinks he can tough it out - because the Kippers can’t afford another leadership contest. This reality is staring the press in the face, but having a political party which until recently had been relatively mainstream, if only in the amount of broadcast media appearances it scored, going bust is new territory for them.

Well, they are going to have to get used to it. Whether Henry Bolton survives the weekend, or the leadership is passed to someone even less suitable - like Adolf von Batten - is immaterial to the party’s future. UKIP is at the end of the financial road, and that is why its staff, one by one, are disappearing from the stage. Not with a bang, but with a whimper.
Posted by Tim Fenton at 16:22

Well I suppose they'll all have to rejoin the tories or the "Robinson" fascists.

Rejoin the Tories? But CCHQ are trying to take control of candidate selection.

If all goes well, a number of them and their mates will be in prison or the bankruptcy courts. UKIP has always been more about enriching people like Farage than anything else. When are we going to be told who pays for Farage's house in Chelsea, etc, etc.