Anti-Semitism is a far-right dog-whistle that few outside the Wackosphere care to blow. So the mainstream press, when they want to demonise Jews, skirt round it, operate in code. This manifests itself in talk of “Goldman Sachs” when it isn’t really about Goldman Sachs, and more recently pinning blame for anything and everything on George Soros. Not that it’s because George Soros is Jewish, you understand. 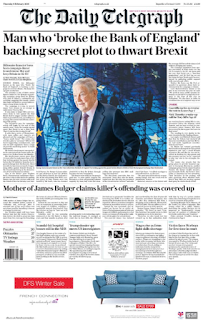 This nudge-nudgery has now allied itself with the desperation of a once great newspaper, as the increasingly downmarket Telegraph has gone full conspiracy wacko with today’s front page lead “Man who ‘broke the Bank of England’ backing secret plot to thwart Brexit … Billionaire financier Soros hosts campaign dinner to undermine May and keep Britain in the EU”. Hardly a secret if the Tel is running the story, is it? 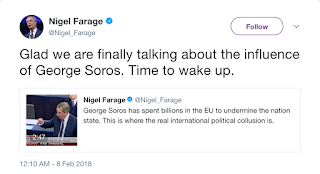 The supporting story - co-authored by Nick Timothy, Theresa May’s former right-hand man - is lame in the extreme, telling “The investor is one of three senior figures linked to the Bremain [!] supporting campaign group Best for Britain, who plan to launch a nationwide advertising campaign this month, which they hope will lead to a second referendum to keep Britain in the EU”. An advertising campaign. That’s all they’ve got. 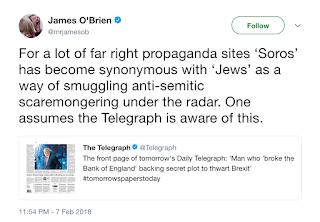 Also buried away in the Tel’s screed is this telling nugget: “[Soros] has been accused of using Open Society to orchestrate an ultra-liberal crusade in Hungary”. So where might that one have come from? It’s part of the not-so-coded dog whistle employed by the morally questionable and mildly paranoid Hungarian PM Victor Orbán. Not that Orbán is trying to play the Jewish conspiracy card. Perish the thought!

And for those who still clung on to the thought that this was nothing more than old-fashioned journalism, there was always Nigel “Thirsty” Farage to put them straight: “Glad we are finally talking about the influence of George Soros. Time to wake up”. Farage has recently claimed “there are other very powerful foreign lobbies in the United States of America, and the Jewish lobby … is one of those strong voices”. Jewish. Foreign. 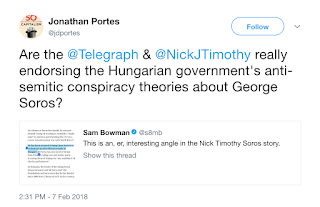 Small wonder that condemnation of the Tel’s tripe has been swift to materialise. James O’Brien mused “For a lot of far right propaganda sites ‘Soros’ has become synonymous with ‘Jews’ as a way of smuggling anti-semitic scaremongering under the radar. One assumes the Telegraph is aware of this”, while Alexander Clarkson asked “Soros has been used as a scapegoat by Orban's Fidesz, Erdogan's AKP, the Kremlin, Milosevic and the GOP. Does the British Conservative Party really want to join that list?”

Jonathan Portes was not quite believing what he was reading: “Are the @Telegraph & @NickJTimothy really endorsing the Hungarian government's anti-semitic conspiracy theories about George Soros?” And Owen Jones put it directly: “Sorry, I’ve got this wrong. As the people correcting me rightly say, this isn’t an anti-Semitic dog whistle on the part of the Telegraph, it’s an anti-Semitic bullhorn” (But Dan Hodges thought it was fine).

Anti-Semitism? Ooh no, only Labour does that. That nice Mr Dacre, who I've never met, didn't tell me that

Worse, it directly implicates Theresa May and casts yet further doubt on her association with someone prepared to put their name to a slice of anti-Semitic conspiracy rubbish.

Perhaps the anti-EU campaign just reached its nadir. But don’t hold your breath.
Posted by Tim Fenton at 09:37

The British establishment has always been a home for Nazis even if the majority of them had the guile to keep quiet about it. Now and again one of them crawls out of the woodwork and makes it obvious but most of the time they use the "look over there" tactic.
A certain "Mr Hilter" wasn't averse to that behaviour as I recall.
Shameful. But then the Right don't know the meaning of that word.

Judaism has nothing to do with it. Like Christianity and Islam, it's just another absurd, outdated superstition.

The problem is, Soros did indeed gouge multimillions from currency dealings over a few hours. Which makes him just another capitalist gangster spiv. He isn't "liberal" at all. His Open Democracy site is merely a self-satisfied propaganda unit. I wouldn't trust Soros any further than I trust Trump - which is not at all. All of it is "business" as usual. Where it otherwise, Soros would have denounced his own activities in currency looting.

The Torygraph of course is using the dog whistle to divert attention away from the blood-and-snot - to say nothing of the custard pies - of the latest comical tory infighting. It doesn't get much funnier than Soubry labelling Major and Dodgy Dave Cameron as "great leaders"; a real coffee spiller that one. Unless it was the line that Major would normally only have got into Downing Street through the service entrance.

The British Establishment, like the US Establishment, has long been notoriously anti-Semitic. All talk of "the power of the Jewish lobby" is utter bullshit. Jewish "influence" is directly proportional to its tiny demography. Israel is a useful Western tool in destabilising the Middle East, allowed only as much influence as Washington and European power mongers give it. Naturally, loony religious Israelis take full advantage of it and expand their "settlements" with the full silent acquiescence of both. The Christian right goes along with it for its own equally loony reasons.

In short, this episode is like all the other similar episodes: Symptomatic of the crackpot far right times we live in. Reactionary desperation writ large.