The obedient hackery of the legendarily foul mouthed Paul Dacre at the Daily Mail is in joyful mood this morning, announcing to the world another great triumph of its acclaimed journalism: “NOW PLASTIC STRAWS BANNED … With 8.5 billion thrown away every year Gove, in another victory for the Mail, acts to stop the menace”. See, Mail readers? There need be no compromise on environmental standards in Brexit Britain. 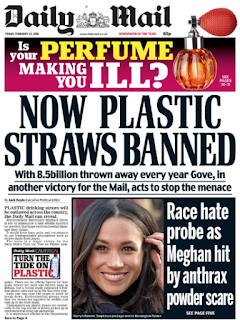 The supporting article continues the euphoric tone. “Plastic drinking straws will be outlawed across the country, the Daily Mail can reveal … Environment Secretary Michael Gove is set to announce a ban within months in a bid to stop the huge environmental damage the straws cause … It would force bars, pubs and restaurants to use biodegradable alternatives such as straws made from paper”.

And readers are left in no doubt as to who shares this magnificent victory with Michael “Oiky” Gove: “The move is a major victory for the Daily Mail’s Turn the Tide on Plastic campaign. There are no official figures for how many straws are used and thrown away in Britain, but a recent study estimated 8.5billion plastic ones end up in the bin every year”. Hurrah for the Vagina Monologue! We salute his indefatigability!

But how real is this ban? “It is understood officials at the Department for Environment, Food and Rural Affairs (Defra) have been working on the details of a ban, which is likely to be announced within months”. So it’s not real yet. And what about the hated EU? “Questions were raised over whether the move was compatible with EU single market rules, but it is understood they are not regarded as a significant obstacle”.

That’s a little selective, isn’t it? And the claim “The ban - which could come into force as soon as this year - would apply to England but not Scotland and Wales, because environmental issues are devolved” masks one important fact, that as the Independent has already told, “Scotland is set to become the first UK nation to ban plastic straws, as part of plans to cut down on single-use plastics”. The Scots beat us to it. 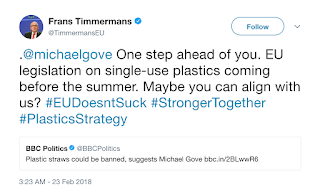 And it gets worse for the inmates of the Northcliffe House bunker. The EU has already set out its strategy for making all packaging and other items recyclable by 2030, as the Guardian reported last month. European Commission vice-President Frans Timmermans responded to the Gove claims by Tweeting “One step ahead of you. EU legislation on single-use plastics coming before the summer. Maybe you can align with us?”

Could that be true? Sadly for Gove and the Mail, yes it could. The European Parliament press release confirms “Subject to Better Regulation requirements, the Commission will present the proposal on single-use plastics later in 2018”. All that will happen is that we fall in line with the rest of the EU. And the Daily Mail is cheering that on its front page - spun, of course, to pretend it doesn’t really involve the rotten foreigners.

Whenever I hear the words 'Gove' and 'Plastic' , why is it the very next word that always enters my mind is 'Surgery'?

Interesting that the Daily Fail is claiming this as a victory but over at the Torygraph it's another dastardly EU plot: -

"The latest EU bombast is to order Britain to outlaw plastic straws. This is hostile, tendentious, futile, piddling and contrary to the liberties of our ancient realm"

It appears the usual right wing press coordinated propagandising has slipped up somewhat, or a leader writer at the Torygraph really, really doesn't want to give up using single use, non-biodegradable plastic straws.

There's a film in this: Attack Of The Killer Straws.

It's all a Putin plot I tell you.

I can hear the opening lines of the film.
Gove to Bozo;" My wife has got plastic drawers"
Bozo; "That's another fine Vaginal Mesh you've got me into oiky"
cont Page 94

And of course Anonymous has to get yet another completely suspiciously off-topic and obsessive Russia mention in, yet again. Stuck record?

That movie title should be amended to Attack Of The Killer Strawskis.

Might as well get it far right politically correct if we're going to indulge this sort of thing.