Christmas has come and gone, and so has Valentines Day. So shops are gearing up for Easter, the next excuse to flog chocolate to the unsuspecting masses. That mainly means Easter eggs. It also means ranting at Cadbury’s because, well, that’s one of those new-fangled Easter traditions, dontcha know? Last year there was a faux ruckus about the alleged removal of the word Easter from their publicity (not true), and this year? 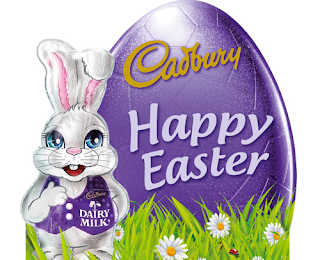 This year it’s all about Scary Muslims (tm). No, seriously. The row, which seems to have started life in Australia, has built and seamlessly crossed over to the UK, both locations playing host to the paranoid and ignorant who get paranoid at the mention of Halal. 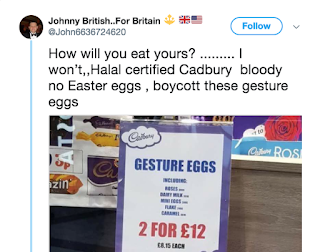 As chocolate does not involve the slaughter of animals, there is no question of whether it is  Halal (or, indeed, Kosher). It just is. But for some out there on the wacko fringe, it’s the hill on which their credibility has come to die. “Cadbury is ‘certified halal’ and has removed the word ‘Easter’ from their wrapping. Let’s remove them from our shopping lists” told one member of the brains trust. Another added “How will you eat yours? I won’t, Halal certified Cadbury  bloody no Easter eggs, boycott these gesture eggs”.

But that was only a sighting shot. “Will not be buying Cadbury again. Anything halal is barbaric”. Yes, well. Resisting Hate tried reason. No, that didn’t work, either: “I suggest you google ‘is Cadbury chocolate halal’ then tweet”. And it gets worse. 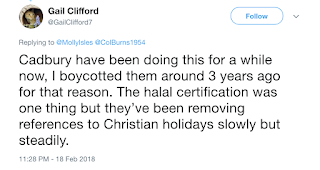 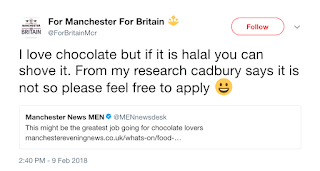 “Cadbury have been doing this for a while now, I boycotted them around 3 years ago for that reason. The halal certification was one thing but they’ve been removing references to Christian holidays slowly but steadily”. Paranoid, much? “I love chocolate but if it is halal you can shove it. From my research cadbury says it is not so please feel free to apply”. That’s the Manchester branch of the For Britain party. I’ll just leave that one there.

There was more. Rather a lot more. “Not supporting Cadbury who support halal certification #ChocCraving”. Will be craving for a long time if you want chocs that are not Halal, but hey ho. “Halal chocolate? No thanks. I'll buy Lindt rather than be paid to eat Cadbury”. I put Stupidity in the post title, because there was Stupidity.

On it went: “You are a Halal company and I refuse to condone torture and suffering in killing of animals, so no Cadbury for me”. Er, hello? Chocolate doesn’t involve … oh, forget it. On to the next wacko: “Stopped buying Cadbury products ever since they chose to make their products  Halal certified. Only to terrorists”. Can it get even worse? 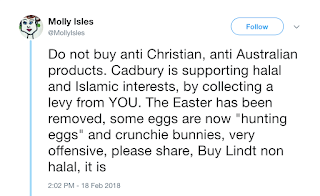 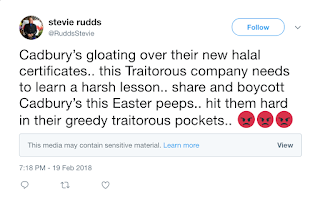 Don’t ask. “Do not buy anti Christian, anti Australian products. Cadbury is supporting halal and Islamic interests, by collecting a levy from YOU. The Easter has been removed, some eggs are now ‘hunting eggs’ and crunchie bunnies, very offensive, please share, Buy Lindt non halal, it is”. No it isn’t. Oh, look out … “Cadbury’s gloating over their new halal certificates.. this Traitorous company needs to learn a harsh lesson.. share and boycott Cadbury’s this Easter peeps.. hit them hard in their greedy traitorous pockets”.

As in Australia, so in the UK. Once one paranoid and ignorant wacko kicks off, the idiocy knows no bounds. Just say “Halal”, sit back, and watch the screaming stupidity unravel.

I'm not anti-christian, anti-judaism, anti-islam, anti-hindu, anti-buddhist or even anti-scientology. If "believing" gives some poor inadequate bastard a measure of deluded solace then so be it.

I just wish the lot of them would fuck off to the nearest mountain top and take their loony superstitious medieval bullshit with them.

They can take Easter eggs and their "holy" books too.

Tom Paine, where are you when you're needed?

One wonders if all these people decrying the cruelty of Halal meat have any idea where the milk that goes into milk chocolate comes from, and what the cow has to endure to produce it.

If I were a muslim, it would be really tempting to try and get as many things as possible labelled as halal, just to mess with bigoted idiots...

At 2 for 12 friggin quid, it's a wonder those muslims can celebrate Easter at all.


And for that reason I thinks I'll give them a miss too, thanks. Well, that and Cadbury's chocolate has become bloody horridable.