The plight of rough sleepers has been thrown into sharp focus this winter after a number of them died during the long, cold nights. And while the right-leaning part of our free and fearless press has invented all manner of excuses to “look over there”, with the Sun’s inept smearing of Jeremy Corbyn this morning taking the biscuit in no style at all, the tragedy of the homeless dying on our streets has now come very close indeed to Parliament itself. 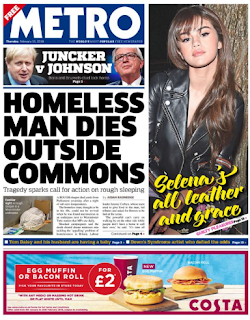 Yesterday it was reported that a homeless man had died just across the road from the Houses of Parliament. Free sheet Metro told “A man died in an underpass at Westminster Tube station during the freezing cold weather last night … Police and paramedics were called to the Tube station at just after 7am this morning after he was found unresponsive in an area where rough sleepers often spend the night”.

He was not the only recent death among that sad and neglected community: the Guardian had an equally sad tale from Bournemouth. “An investigation has been launched into the death of a rough sleeper whose body was found in a car park amid claims that sleeping bags used by homeless people were removed as part of a tidy-up … The 66-year-old man, identified only as Kev, was discovered by an office worker in a car park in Bournemouth, Dorset … Kev had not been well and his final words to a soup kitchen volunteer were: ‘If I wake up, I wake up. If I don’t, I don’t’”. Kev was 66, as was the man outside Parliament. 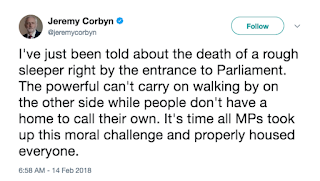 One party leader was moved to demand action: Jeremy Corbyn responded to the news by letting his followers know “I've just been told about the death of a rough sleeper right by the entrance to Parliament. The powerful can't carry on walking by on the other side while people don't have a home to call their own. It's time all MPs took up this moral challenge and properly housed everyone”. Meanwhile, one of his colleagues had more bad news.

Dan Jarvis, MP for Barnsley Central, told “Just had awful news that a rough sleeper has died in Barnsley. It's appalling that in 2018 people are dying because they've nowhere to live … Today I visited @RoundaboutSheff who're doing amazing work to support the homeless. No doubt that Govt are failing the most vulnerable”. 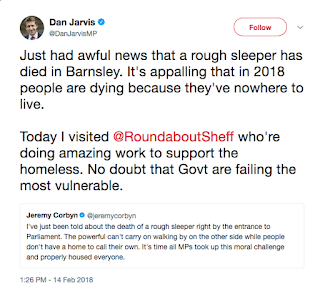 To be reduced to living on the streets is for most of us unimaginable. We often shut it out of our consciousness, so awful is the prospect in today’s world of plenty. But that plenty is not for everyone, and more and more are falling through the net, like the poor soul who was found dead yesterday morning after a freezing cold night in Westminster.

It is not a coincidence that last December, David Gauke, now Work and Pensions minister, admitted on The Andy Marr Show (tm) that “Some benefits sanctions that forced the poorest into debt ‘were wrong’”. That report also told “Sanctions on certain benefits have been blamed for forcing some of the poorest people in society into poverty and leaving them at risk of homelessness”. The Gauke Twitter feed is silent this morning. 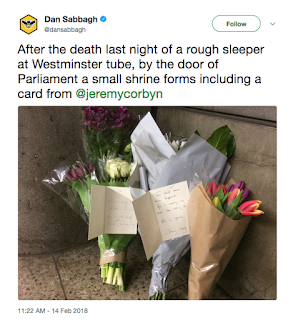 But someone out there cared about the unknown man who died inside Exit 3 of Westminster Tube: as Dan Sabbagh of the Guardian observed, “After the death last night of a rough sleeper at Westminster tube, by the door of Parliament a small shrine forms including a card from @jeremycorbyn”. Yes, a party leader cared about him.

Meanwhile, the right-wing press and its pals smear Jezza as a Commie. Sick, or what?

Wasn't it a certain Ian Duncan-Shit who resigned because the rest of his idle shower weren't letting him be as kind with benefits as he wanted to be. Lying bastard!
Bloody shameful. But hey, they're poor, they don't vote for us so they don't count.
At least someone's got a heart.

I read elsewhere that Corbyn's LOTO team quite often took him warm food from parliament:

"Not much is known about the man, but Jeremy Corbyn’s ‘LOTO’ (leader of the opposition) team regularly used to take him hot food from the PCH canteen."

Sort of puts Javad's privatisation of housing associations into perspective.

Britain 2018. Where homeless die in the streets, where the elderly die of hypothermia because of companies greed......and where rich people are given government tax handouts.

We have become a very sick society. And we let it happen. We let them get away with it.

Awful, but preventable, much of our towns and cities are being gentrified, studentifed or forgotten.
When will people wake up?