Grid Girls - Get The Nanoviolin

Motor racing, and particularly Formula 1, is something I’ve followed on and off for more than 45 years, from the days when it really was dangerous, and happened on public road circuits several times each year (not just Monaco), to the modern-day variant which is still challenging for the driver, but without the knowledge that two or three of those on the grid won’t be there at the end of the season. It’s changed with the times. 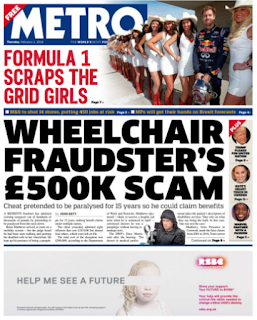 But one thing that had not changed over the years had been the use of young women, often wearing very little, to “adorn” the starting grid. Sponsors have also draped female bodies across their stands. But that was then, and this is now: Formula 1 is no longer the domain of the occasionally politically incorrect Bernie Ecclestone, but has recently changed hands. And the current owners want to move on.

So the “grid girls” are no more. Owners, sponsors and organisers have admitted that they are now in the 21st Century. And while free sheet Metro simply tells readers “Formula 1 scraps the grid girls”, the Express recoils in horror at the prospect, at the same time ensuring the world knows Who Done It: “Now Formula 1 grid girls are banned … PC culture is driving the world mad!” No-one banned anything, but hey ho. 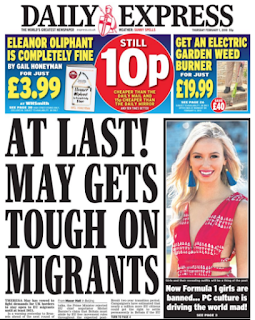 But it is the Murdoch goons at the Super Soaraway Currant Bun who have taken the biscuit in no style at all, howling “Fans Slam Snowflakes … FORMULA DUMB … Now killjoys ban Grand Prix grid girls”. That their front page photo, showing a visibly embarrassed Lewis Hamilton flanked by four young women striking a forced pose and an even more forced smile, does not help their cause has not occurred to the hacks.

And the inmates of the Baby Shard bunker have not yet twigged that Bernie ain’t in charge any more, blustering “EX-Formula One chief Bernie Ecclestone, 87, slammed the snowflake prudes ruining Britain - and insisted grid girls were a much-loved part of the sport … The 87-year-old said: ‘These girls were part of the show. Fans love the glamour’”. But it’s not his show any more. So his word matters very little. 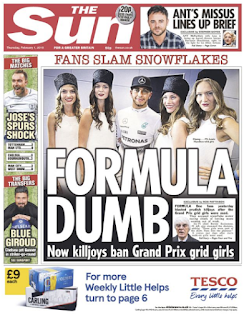 Still, on with the ranting: “Formula One fans also blasted prudish killjoys after the Grand Prix grid girls were axed … They accused snowflake motor racing chiefs of forcing more women out of work … It comes just days after darts walk-on girls were axed”. This is total crap. There is one Formula 1 event in the UK each year, so the idea that not having “grid girls” will throw people out of work is plainly ridiculous.

The excuses for having “grid girls” are lame in the extreme - such as “Ecclestone, who previously introduced ‘grid boys’ as a trial, said they served an essential purpose in getting drivers quickly to the right car on packed grids”. Yeah, right. If you’ve just put the car on pole, you don’t need telling where to find the thing.

There are no “snowflakes” involved. No political correctness is in play. There has been no outbreak of prudery. As with darts - and snooker - sports are moving into a modern-day reality. No-one is being thrown out of work. And the only choice that matters is that made by the organisers, who, after all, are paying for the whole show.

“Grid girls” are an anachronism from the last century. Get over it, press clowns.
Posted by Tim Fenton at 10:07

Isn't it weird how all these free-market capitalist sport enterprises are apparently making moves to alienate their fanbase? There's no way there's some other motive behind it, certainly not moves to diversify their audience and broaden the appeal of the respective sports. It's all about pissing off those who expect every event should be accompanied by some mild perving.

So why did the Scum "ban" page 3 "glamour girls" and put them out of work?

Good to see how effortlessly the Sun adopts the lazy 'snowflake' cliché hitherto the preserve of the 'all trite' neo-fascists.
'Cucks' and 'libtards' next?

It seems the Sun's 'Now' correspondents have stolen the jobs of their ' Why oh Why' colleagues.
Does this mean we will see more 'nows' and less 'Why oh Why's' at the Sun? Or perhaps they have all gone to work with Richard Littlebrain and Quinten Wetts his pants at the Daily Hail.

The best bit is the obvious impression that the S*n wants to make this into a big culture war fight...but no-one else can really be bothered, not even the Mail.

I hadn't thought about it from that angle- but you are correct, and it is utterly hilarious!

Funny, that. 'Snowflake' is a black racist pejorative for white people, as is 'Grey Meat'. You would've thought East End racists would know that. A tremendous own goal, even by West Ham standards.

So we are supposed to be angry about a few women losing a few days agency work holding up an umbrella in the cold whilst men ogle at them.
Instead of protecting faux outrage over a commercial decision by a private company to stop objectifying women, a better story involving that picture on the front page would be for the paper to question why the multimillionaire Lewis Hamilton has aggressively avoided paying taxes in the uk. I think its readers who are forced to pay their taxes would be more likely to be outraged over that?

But of course it couldn't do this because its owner and its backers want you to be angry over a few women instead.

You've GOT NO EVIDENCE!

Let's have your EVIDENCE.

“These girls did nothing harmful to anybody. They were smartly dressed. We might as well say we don’t want people to go to a fashion show because, basically, that’s what happened."

...except that people go to a fashion show to see the designs, not the models (a bit like F1, but they use cars instead). Maybe he's confusing it with a beauty contest.

This is going to cause havoc among the Essex shell suits, trainers, tattoos and body piercings.