For a group who like to hector and sneer in unison at anyone to their left - which means most of the population - about “snowflake” behaviour and getting outraged over next to nothing, the right-leaning part of the Press and Pundit Establishment and its hangers-on have done a terribly good impression of joining the same club after Virgin Trains decided they would cease selling the Daily Mail on board their services. 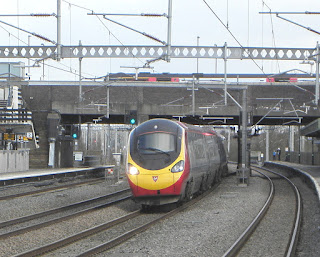 No Daily Mail on sale, or the Guardian either

This was a purely business decision - VT sells only 70 copies of the paper a day - as well as responding to the concerns of its staff. You would not have known that from the puerile and intemperate howling that followed the discovery - yes, discovery, because VT made the decision back in November. Have a think about that. 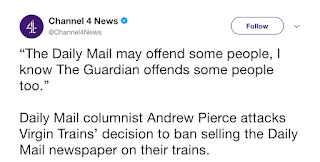 So who would rally to the Mail’s standard? As one of the reasons for no longer selling the paper was its attitude to LGBT issues, it had to be Andrew Pierce, speaking AS A GAY MAN, to declare “Just done @eddiemair on @BBCPM on curious Virgin Trains ban of Daily Mail. Doing @bbc5live at 5.50”. He then popped up on Channel 4 News to whine “The Daily Mail may offend some people, I know The Guardian offends some people too”. But there was no ban, and VT does not sell the Guardian. Still, details, eh? 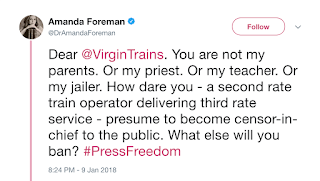 More seriously, Murdoch shilling taker David Aaronovitch was concerned: “No folks. Clever arguments and all but I'm afraid Virgin's IS an act of censorship. On their own admission they are not selling something they sold before mainly because they don't like what it says”. Going to campaign for VT to flog the Guardian? No, thought not. But at least he was coherent, unlike fellow Murdoch hack Amanda Foreman, who howled “Dear @VirginTrains. You are not my parents. Or my priest. Or my teacher. Or my jailer. How dare you - a second rate train operator delivering third rate service - presume to become censor-in-chief to the public. What else will you ban?” Boo! Hiss! You’re rubbish!

The collective idiocy extended to Nigel “Thirsty” Farage, who thundered “.@richardbranson as we don’t believe in censorship on my @LBC radio show, please can you DM me to join the conversation from 7pm this evening - to explain why you’ve banned the Daily Mail from Virgin Trains”. Branson was not involved, and nothing was banned. That didn’t occur to Dan, Dan The Oratory Man who was also in ad hominem form: “Virgin Trains bans the Daily Mail because ‘this paper is not compatible with our beliefs.’ Maybe, instead of worrying about Brexit, immigration etc, Virgin should worry about getting passengers from A to B on time and at a reasonable price”. He doesn’t use their trains, either.

Former Murdoch hack Kevin Schofield was sure It Was Branson Who Done It, though: “Imagine a world where you could only buy newspapers approved by Richard Branson”. But he won’t be campaigning for VT to stock the Guardian, either. Meanwhile, alleged entrepreneur Richard Woodward pretended he was a rail expert: “Virgin Trains have banned the Daily Mail. I shall now buy it and wave it everywhere and go to Manchester via Sheffield with alternative operators and 1 change. Can't wait for them to disappear”. You can do that by going via Stoke and saving money, clever clogs. 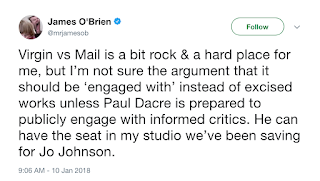 Emma Kennedy tried to inject a little reality: “Amused to watch RW commentators wailing the Mail is being censored when any passenger on a Virgin train could happily buy a copy at the station”. Correctamundo. And James O’Brien injected rather more reality: “Virgin vs Mail is a bit rock & a hard place for me, but I’m not sure the argument that it should be ‘engaged with’ instead of excised works unless Paul Dacre is prepared to publicly engage with informed critics. He can have the seat in my studio we’ve been saving for Jo Johnson”. They all demand Branson, who had nothing to do with it, presents himself for interrogation, but the Mail’s chief decision-maker can always hide behind someone else.

Meanwhile, there were those who declined to take the Mail’s outrage seriously, with “I see Virgin Trains are getting heavily criticised because they're no longer going to stock the Daily Mail? We went through that too, when we decided to change back and use regular toilet paper” being typical (I lost count of the toilet paper jokes). And another Tweeter reminded the Dacre doggies “if you think Virgin Trains not stocking the Mail is a blow for free speech wait until you hear about this city called Liverpool”. Quite.

Nothing has been banned. And had the issue been worth expending all that hot air over, perhaps one of those getting righteous about VT’s decision would have spoken up when the decision was taken. Anyone might think there are a lot of pundits out there who have nothing better to do right now. Just a thought.
Posted by Tim Fenton at 10:47

Having refused even free offers of the Daily Wail and absolutely rejected the notion of selling this mindless, hypocritical crap to others, does this qualify me as an enemy of the Dacre Doggies?

Branson runs a commercial profits-making organisation which has made a decision in a "free market" (no, really).

So the Daily Heil is out on its arse. Thus exciting the clitoris of ranting righties like Pierce and Aaronovitch.

If I was Damian Green I'd be blowing my socks off on this.

Oh the hilarious irony of it all.

Couldn't happen to a more deserving gang of reactionary knobheads.

VT only said they wouldn't sell/give the DM but they didn't ban the readers. So nothing in it for me. But now some of them are basically threatening a boycott of the trains it means I really do gain, best news I've had all day.

Even better, given that most of them are so confused by the state their own policies have left the railways in, they might even boycott other companies as well! We could have a DM free network soon.

Listen I loath and despise the Daily Mail as much as any decent lefty.
It’s a disgusting racist sexist and classist Tory rag that peddles hate against immigrants, disabled and unemployed people who claim benefits and it leers over women like dirty old men.
It’s headlines routinely stir up fear and panic about immigrants and Muslims and demonize disabled people as fraudsters and faking benefit scroungers.
And its disgusting side bar of shame is full of leering filth making comments about the expanding cleavage of pregnant famous women.
But I am not going to applaud and bow down and kiss the feet of Richard Branson and Virgin Trains for banning the Daily Mail on their trains.
Because Virgin are still a money grabbing greedy arse corporation regardless of whether or not they sell low rent racist tabloid rags on their trains.
Virgin Trains have consistently raised the prices of their already extortionate tickets and every year they take advantage of the annual New Year train ticket price hike that all the money grabbing train companies do.
And Virgin Care sued the NHS after it lost out on a contract to provide services to children..
http://www.independent.co.u...
What a wicked callous money grabbing company Virgin are that they would take money that could be used to pay for better care for severely sick people.
But despite this we are told that we on the left should congratulate and thank Virgin for stopping the sale of the Daily Mail on Virgin Trains.
Well FUCK RIGHT OFF!

Whatever you think about Mr Branson's operation it's pretty hilarious to see the toys come out of the Mail pram in such spectacular fashion.

Suppose a chap reads adult magazines. My local newsagent decides not to stock them anymore. Is this censorship? Hardly since he could just as easily go elsewhere or buy them via subscription.

I remember when WHSmith took offence at Private Eye's brilliant front page at the time of Diana's death in 1997. The Eye was taking the piss out of the press hypocrisy ad mawkishness of the day. Someone complained and copies were removed from WHSmith's shelves. Did those complaining about the Virgin Trains decision complain of 'censorship than? I bet not.

......something else has occured to me. As Tim noted, the decision was made well before christmas, there was a small mention with the same quote about brand values in the January edition of the ASLEF Journal, and that was in the post in December.

So how come none of the main stream media mentioned it until the DM went off the deep end? Did every single commercial news outlet (and the BBC) really miss the press release that ASLEF saw?

Or was there some unholy agreement not to say anything whilst the DM desperately tried to negotiate some deal with VT? A free press - apparently not!

And I love Boris Johnson saying the(non)ban is "pompous and arrogant" - pretty much exactly how many people describe him.....