The Murdoch goons at the Super Soaraway Currant Bun are beside themselves this morning at the thought that their readers might start paying attention to more of those loathed experts, this time on the subject of childhood obesity. What the inmates of the Baby Shard bunker have not said, though, is that there is a very good reason for them to leap to the defence of those peddling sugary treats to youngsters. 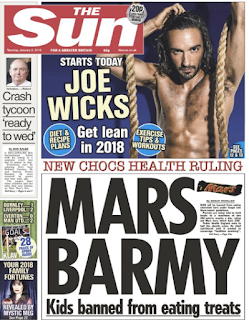 Instead, the outrage machine is cranked up to the max as the headline screams “New Chocs Health Ruling … MARS BARMY … Kids banned from eating treats”. Banned? How so? “KIDS will be banned from eating chocolate bars under tough new Government guidelines … Parents are being told to limit treats to a maximum of two 100-calorie snacks a day, ruling out Mars bars which have 230”. So not banned, then.

And what is this “told”? “Public Health England aims to halt the obesity crisis. Its chief nutritionist said it wanted to encourage ‘healthier snacking’ … Kids will be urged to swap choc bars for snacks like plain rice cakes, sugar-free jelly and fromage frais un­der new guidelines … They say youngsters should be limited to two of these between meals per day”. Wanted to encourage. Urged. Should. So not told, either.

But the shock horror machine was now in full flow: “That rules out Mars bars which have 230 calories, KitKats, with 209 and Dairy Milk bars on 240. Even half a bar would be too much”. The horror! Oh, and a large photo of a Twix has been helpfully added, along with the caption “Twix have a total of 248 calories”. Twix is manufactured by the same people who make Mars Bars. I wonder if there is some connection here?

Meanwhile, “Sun writer and mum of two” Natasha Harding is, by complete coincidence you understand, in tune with the paper’s line, telling “I BELIEVE in the saying that a little of what you fancy does you good … I have an occasional sweet treat and think it’s only fair my children, Zak, 11, and Lexi, four, do as well … I don’t want mine [kids] obsessed with food and I think if you make things an issue then they can become one”.

We even get the non-expert opinion of Tory gobshite Andrew Bridgen, the member for Himself Personally Now, who wants us to know “I tend to think that most things are fine in moderation”. Except his rent-a-quote rantings, which we get in excess.

So why is the Sun on a hair trigger at news that could see sales of chocolate bars fall yet further? Ah well. Here we enter the world of PR and back-scratching, along with the name Alison Clark. She’s “Vice President Corporate Affairs & Strategic Initiatives” at MARS Food Drinks & Multisales. She previously spent five and a half years as Director of Corporate Affairs at Mars UK. And her last berth before joining Mars UK?

Alison Clark spent more than 14 years as Director of Corporate Affairs at what was then News Corp - at Wapping. Yes, the VP at Mars, the firm wanting to flog all those chocs to kids, spent many years as a taker of the Murdoch shilling.

You scratch our back, we’ll help sell Mars Bars. Treble Celebrations tubs all round!
Posted by Tim Fenton at 12:11

Hypocrites.They are always going on about how lazy and unfit children of today are then in the next breath they want to stuff them full of sugar.

All people in full possession of reasoning have always known Murdoch's products are bad for normal health.

Reading this blog, you have to wonder just how members of Murdoch's goon squad live with themselves. Especially in cases like this where the health of children is a first concern.

Is it any surprise Murdoch and his lackeys are held in such contempt? Are they such cowards, or so much up to their necks in mortgage debt, that they are willing to betray even children's health?

The clue is in the words - "government guidelines" which should be enough to tell anyone in possession of a brain cell that this is voluntary and not compulsory. In reality how would anyone police this?

Still, I suppose if you're dumb enough to part with good money on this drivel (extra for drivel at the weekends)you'll believe anything. Even that it's real journalism.......

Still no "advisory guidance" on not reading The Sun and other unsuitable rag content.
You'd think the USA were ruling the Britannia waves.....

"I tend to think that most things are fine in moderation"

Isn't that exactly what these government guidelines encourage?