The end of another era has come today as the Guardian abandons the Berliner format and moves to join most of the rest of the press as a tabloid newspaper. Next Sunday’s Observer will follow suit. This is part of a longer term drive to reduce costs as part of a three-year “transformation programme”, with the Guardian’s own printing sites closing as that part of the production process is outsourced to Trinity Mirror group. 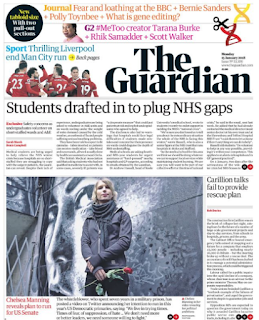 So far, so routine, but one media organisation has decided it cannot let the move go without comment. As befits those whose machinations were exposed when the Guardian blew the whistle on phone hacking, the Murdoch goons at the Super Soaraway Currant Bun have dedicated part of today’s editorial to sneering righteously at the Rotten Lefties (tm) from Kings Place. The attack is as crude as it is dishonest.

Under the heading “Small world”, the inmates of the Baby Shard bunker snipe “THE Sun warmly welcomes the Guardian to the tabloid club … As of today, the cash-strapped newspaper has shrunk to save on costs after making a £38million loss in 2016/17 … So, from one tabloid to another, here is our suggestion for them to turn around their failing fortunes: actually report some exclusive, rip-roaring stories … We know that is an alien concept to them but it might help them flog a copy, or two”. 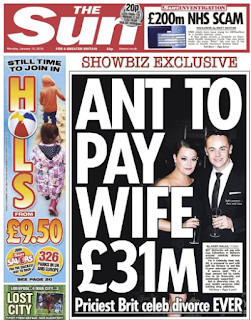 Rip-roaring stories? Non-exclusive with made up numbers ...

And, as Jon Stewart might have said, two things here. One, the Sun has no room to call anyone out for losing money: the former cash cow of the Murdoch mafiosi lost £24 million last year, and while this is less than the Guardian’s loss for the same period, they made up for that by shipping a whopping £68 million the year before. 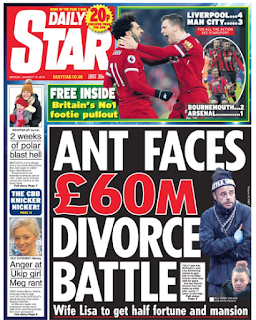 ... which the Daily Star did better

Why is the Sun losing so much? Simples: the paper has had to pay out tens of millions in damages to settle phone hacking claims - and keep them out of the courts. Worse, the consequences of the paper’s illegal behaviour continue: the Sun’s representatives are back in court later this week over a raft of allegations, including not only phone hacking, but blagging, and the minor detail of email deletion and evidence suppression. 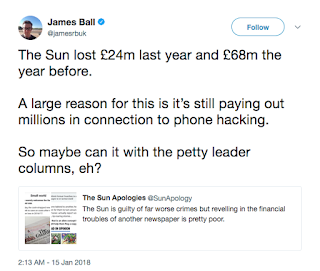 Plus two, the Sun also has no cause to get righteous about “exclusive, rip-roaring stories”, as the front page of today’s edition shows. Although the headline claims “Showbiz Exclusive … ANT TO PAY WIFE £31M … Priciest Brit celeb divorce EVER”, there is nothing exclusive about a story already in the public domain - Ant McPartlin and his wife splitting - embellished by made-up quotes from the ubiquitous “A source said”. 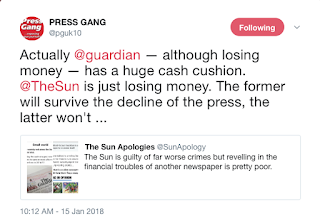 Moreover, what happens between McPartlin and his wife is of Sweet Jack relevance to all those ordinary Brits who shell out their hard-earned dosh to keep Rebekah Brooks, Tony Gallagher and the rest of the Sun freak show in the style to which they have become accustomed. On the other hand, the Guardian’s lead, about yet more sticking plaster being applied to the NHS, is relevant to almost all of them.

The Murdoch Sun: stinking hypocrisy, criminal behaviour, and irrelevant tosh served up as if it were real news. No-one need take lessons from this shower.
Posted by Tim Fenton at 12:17

Hmmm. But doesn't the "Currant Bun" rely on second hand, rip roaring lies to sell it's garbage? Comes in handy when you're purveying shite but does nothing to promote journalism.
Might as well make up any old story as long as it brings in some cash.
Oh wait................

"£24 million last year...a whopping £68 million". Don't come the raw prawn. Just look at the Aussie News Crap loss figures as well as they would frighten the Kangaroos.
The mystery is why Rupert continues to pay these oafs such huge wages for publishing the load of bilge when half a dozen staff writers could churn out the entire week's lot and a reasonably experienced editor could easily follow the set format for a fraction of the price.
They all come to grief anyway when either James (the idiot son) or Lachlan (the slightly brighter one) finally wrestle control from dad and send theses loss making tedious gutter rags to the knackers.
Five years tops and that's being generous.

Murdoch has always been subsidised by far right international financial institutions because he's a useful mouthpiece for them. It doesn't take talent to fall to the lowest common denominator. All it takes is a complete loss of decency and conscience.

The only thing that saved him from economic destruction was Sky TV football. Without that he was fucked. Before that, he was on the verge of bankruptcy.

He's a corrupt, lying hypocritical twat. And so are his employees - they all know what kind of shithouse organisation they peddle their propaganda for. Which is why there won't be one shred of sympathy for them when the inevitable happens and they have to shuffle into the dole queue.

Wouldn't it be too funny for words if the Grauniad tabloid overtook Scum sales.