The trial of Darren Osborne, accused of driving a hired van into a crowd outside the Finsbury Park Mosque in north London in an incident where one man died and several more were injured, continues today. But somewhere in Bedfordshire, one person whose name featured in proceedings yesterday is most unhappy, and that someone is Stephen Yaxley Lennon, who styles himself Tommy Robinson. 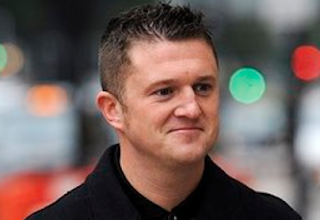 Yesterday’s BBC report told that “Mr Osborne later received an invitation to a demonstration from an account using the name Tommy Robinson calling for participants to ‘stand up and say no more’ to extremism … Mr Rees said: ‘No-one is suggesting it's him [Mr Robinson] in person but obviously people who follow Tommy Robinson’”. Nonetheless, Lennon was, as so often, calling “liar” at anyone mentioning his name. 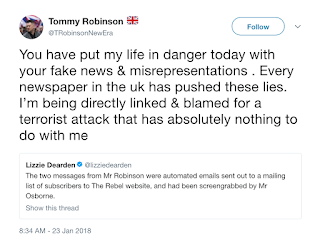 Lizzie Dearden of the Independent, who had the audacity to try and do her job and report from the court, was one of his targets: “You have put my life in danger today with your fake news & misrepresentations . Every newspaper in the uk has pushed these lies. I’m being directly linked & blamed for a terrorist attack that has absolutely nothing to do with me”. How many newspapers blamed the attack on him? That would be none of them. 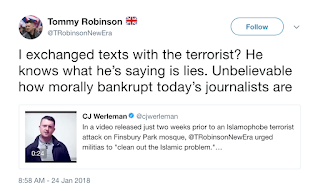 C J Werleman was another to incur Lennon’s displeasure: “I exchanged texts with the terrorist? He knows what he’s saying is lies. Unbelievable how morally bankrupt today’s journalists are” Werleman did not say, in the Tweet quoted, that Lennon had done that. But it was today’s developments that brought forth the hypocrisy.

First off, Lennon accused others of hate crime, which many followers of The Prophet may find interesting. “How do no journalists report on these ? We hear so much about hate crime . These cunts are posting an address & inciting people to murder my children . I feel sick reading this shit . Why the fuck don’t you ever do anything @bedspolice”. 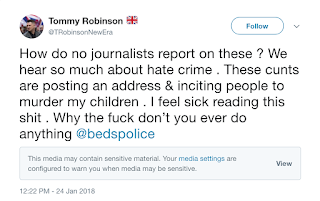 What, pray, was this he spoke of? As he had another go at Ms Dearden, who was only relaying what had been put before a court of law, we got an idea of what it was: “.@lizziedearden This is the result of your false reporting , I have people posting pictures of houses & calling for my children to be murdered”. Someone had posted a photo of his house. This, he declared, was totally out of order. 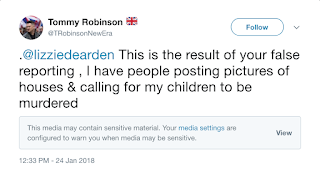 Well, have I got news for you, Stephen Lennon. You posted a picture of my front door recently, and that was seemingly OK. You couldn’t have given a shit about my wellbeing, or that of anyone else in the house, or neighbouring houses. You came back the next evening and trained your camera on the front bedroom. And now you’re bleating that someone has done the same to you. Well, suck it up, laddie. Suck it up. 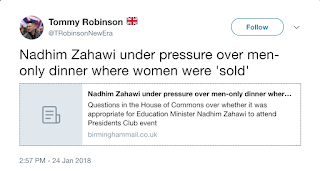 Lennon just doesn’t get it, does he? After all that, he had a go at Tory MP Nadhim Zahawi - oh look, he’s a Muslim, isn’t he - over the now-notorious President’s Club bash at London’s Dorchester Hotel. His Tweet reads “Nadhim Zahawi under pressure over men-only dinner where women were ‘sold’”. But the FT report, from which all others are getting their story on the affair, does not claim women were “sold”, with quotation marks or otherwise. 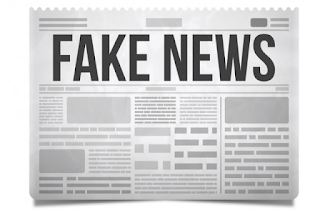 If it had been him on the receiving end, he’d have been whining about Fake News again. It’s so different when the boot is most firmly on the other foot. No surprise there, then.
Posted by Tim Fenton at 15:56

Start here
One of his rebel media supports tries to defend himself, and then another one rebel media viewer pops in later
https://twitter.com/joedoyle11/status/955839666745421825

ps the response to your earlier article is classic, and I am sure you will enjoy it. "Another bullshit article telling half the story"

I wonder who to believe. Tim or @joedoyle11 who runs the irish equivalent of lennon's page in Ireland, and sees those scare Muslims(TM) on every street corner

I wonder......Can "Robinson" tell us which half is "bullshit" and which half the truth?

With the Chutzpahs and the Nadirs I think you've just invented Tommy's perfect new neighbours!

"Mr Rees said: ‘No-one is suggesting it's him [Mr Robinson] in person but obviously people who follow Tommy Robinson’”.
His Twitter account had a blue tick then, so it was certainly him. And his responsibility, even if others had access.

Indeed! Sounds like the makings of 'Till Death Us Do Part 2.0.' Now, who could be Alf Garnett...?