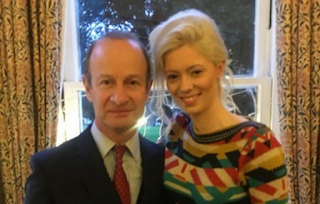 Just a regular couple? Pull the other one

Yeah, y’know, nudge-nudge, wink wink, Phwoar! After all, he’s 54 and she is all of 25. But one look at the name on the by-line tells you this is a seriously clueless and superficial take: the piece is the work of the odious flannelled fool Master Harry Cole, formerly tame gofer to the perpetually thirsty Paul Staines at the Guido Fawkes blog.

So even the Sun changed tack soon enough, as readers learned “UKIP BOSS Henry Bolton has cheated on TWO Russian wives, it was claimed last night … His second wife, a hairdresser, accused him of having an affair with the woman who later became his third wife”. There do seem to be a lot of Russian women around UKIP. But it wasn’t about them.

Then the Mail chipped in with “Last night a former lover of Ms Marney urged Mr Bolton to dump her. Nigel Mogg, 51, said: ‘Jo has always had a thing for older men and celebrities. She’s a loose cannon and has always wanted to be famous. I’d urge him to dump her’ … He said Ms Marney contacted him on Facebook when she was just 17 - and their relationship became sexual when he came to the UK. He added: ‘She looked very young so I made her show me her ID. She was 18. I didn’t want to get into trouble’”.

That wasn’t the only other man in the picture, before Bolton got to where he claimed “I've had a change in my relationship status” (sounds so much more businesslike than “extra-marital shag”). Jasna Badzak, who has been there, seen it and has a whole wardrobe of T-shirts when it comes to matters UKIP, had something to tell us about the affair. 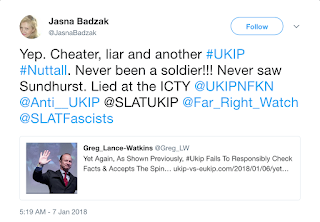 After passing severely adverse comment on Henry Bolton’s integrity - “Cheater, liar and another #UKIP #Nuttall. Never been a soldier!!! Never saw Sandhurst. Lied at the ICTY” - she reminded us that Ms Marney’s first port of UKIP call was someone other than Bolton - someone with a very familiar sounding surname.

“Breaking News: #UKIP Bolton wasn’t the first choice for ‘model’ Jo Marney. She started with #Farage Junior but we don’t know what was the going price in July 2016. Maybe she could enlighten us. Was it just IPhone or MacBook too?” More of the Shagger Family Farage! Doesn’t look like so much of a love match now. 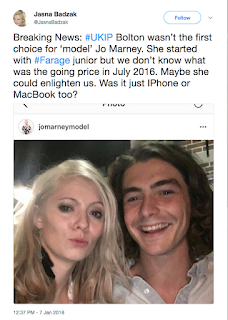 Heck, even Nige is relaxed about it, telling anyone who will listen “It’s up to him what he does. At least he is being talked about now”. Forget the “affair”, this is nothing more than a publicity stunt using the services of a young woman keen to advance her public profile.

The clown from the Sun was duped. It’s all been set up. And it still won’t take UKIP’s poll ratings out of the noise floor. What a complete and absolute shower.
Posted by Tim Fenton at 16:12

So UKIP made assets of Russian wives?

Fucking hell, I thought it was the other way round.

Or Trump's a Russian asset.

Or Catalan independence is.

Or Scottish independence is.

Or the French election is.

Or the German election is.

Or Mothercare's profits plummet is.

God almighty, those Russkis are into EVERYTHING.

"There do seem to be a lot of Russian women around UKIP."

Foreigners have to do all the rotten jobs the Brits don't want to do.