When the only ones defending the President’s Club and its jaw-droppingly sleazy fundraising dinner at London’s Dorchester Hotel last week are the inmates of Spiked, so titled because it should have been long ago, you know the cause is a lost one. So when the news came that the charity is to be closed down, it came as no surprise. But the questions have kept on coming - not least for the Tory Party. 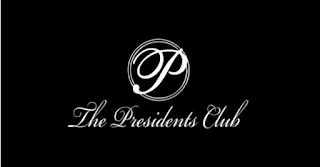 Because while most of the press, from the Guardian’s “Elite men-only club shuts amid furore over groping scandal”, to the Murdoch Sun’s “Tory aide quits over ‘gropers’ gala … Minister carpeted by furious PM … Charity bash axed, cop probe urged … SLEAZE BALL”, have condemned the actions unearthed by the FT’s earlier revelations, The Blue Team’s participation in, and excusing of, such events is coming into focus today. 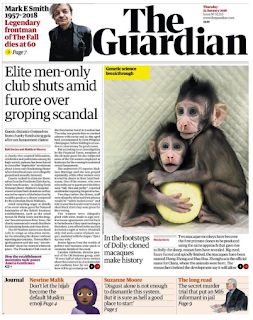 Specifically, the conduct of children and families minister Nadhim Zahawi, who attended the dinner, is being examined after the BBC reported “Nadhim Zahawi said he attended The Presidents Club fundraiser but left early … The BBC understands he was called to Downing Street on Wednesday to explain his attendance to chief whip Julian Smith”. 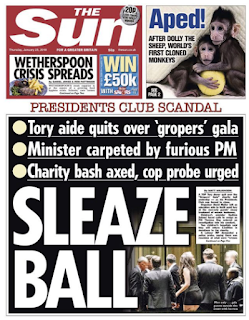 Steven Swinford of the Telegraph noticed an inconsistency in Zahawi’s excuses: “Nadhim Zahawi facing growing questions over his version of Presidents Club dinner. No 10 said he told them he left ‘at the point the hostesses arrived’, which FT say was at 8. Friends say he told them he left at 9.30”. Also, it may not have been Zahawi’s first time at the event. 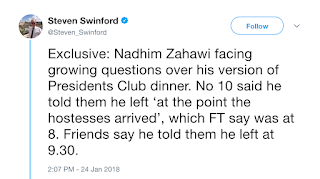 After culture secretary Matt Hancock went on the Radio 4 Today Programme this morning, it got worse, as Labour’s Aman Thakar observed: “Matt Hancock says Nadim Zahawi left #PresidentsClub early because he felt uncomfortable? I thought the official line was he didn't see anything”. And then Hancock’s own past got an airing.

He was asked if he had previously enjoyed the kind of dubious hospitality on offer from the likes of the President’s Club. His reply was not convincing: “‘Have you ever attended such an event’ (#PresidentsClub ) ‘No, no, i dont think so’ says @MattHancock Then clarifies this with ‘No, never in my public life have I attended such events’. I suspect he may now have to think very hard about his personal life” observed one Tweeter. 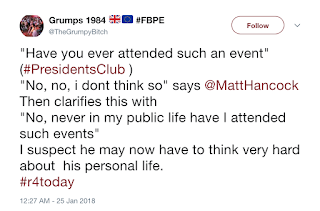 Perhaps, like Toby Young at that eugenics conference, he sat at the back and kept quiet. And there was yet more: Labour MP Liz McInnes reminded everyone that in October 2016 she had Tweeted “Hi @JustineGreening, as Minister for Women and Equalities, could you please have a word with Horwich Conservatives? Thanks”, attaching a photo which showed an advert for “Gentleman’s Evening … comedian, strippers, waitresses and food”, as if all were part of the menu. She did not, it seems, receive a reply. 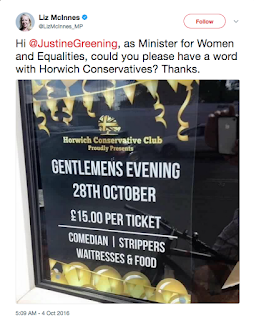 All of which means we have two ministers whose futures may be in doubt, and a party in Government which has a past record of not taking sexist, misogynist and downright sleazy behaviour seriously, whatever temporary outrage Theresa May can muster.

Tory sleaze never really went away. And that’s not good enough.
Posted by Tim Fenton at 10:30

I warned ages ago about Hancock (crazy name, crazy guy!). He's a hypocritical slimeball even by tory "standards". So is Zahawi - recently "interviewed" in the most cringeworthy manner by Snow, the ageing C4 News creep.

Seems they'll all have to retreat into their corruption closet. But sooner or later they'll burst out again. You can take the slime out of London, but not London out of the slime.

The media "coverage" is merely outrage that the culprits made it all stupidly obvious. "Outrage" from the the likes of page 3 Scum tells you all you need to know.

Outrage and our Treez in the same sentence even if only temporary, well I never!
She's not doing very well in getting rid of the nasty image is she?
Wasn't that a key part of her aim as leader. Along with creating a fairer, more equal society. And putting an end to the "fat cat" era. And several other things besides.
Ah well, maybe they went the way of a "strong and stable government".

I can't believe the Horwich Conservatives, how can standards have fallen so low. What happened to the apostrophe in Gentlemen's?

PS. Does advertising events with strippers or gropefests in gold and black make them more upmarket?

How weird. A proper poster for a function advertises the presence of Waitresses. Presumably they all had to dress as Vicky Michelle in Allo-Allo.

I'm sure Mesdames Perrin, Long and Hartley-Brewer will be proclaiming some form of 'right-to-work-as-I-please' litany sometime soon. Whilst pretending to ignore that non-disclosure conditions probably apply.

The Dorchester must have been deserted by 9-30 as everyone who admits being there left early!
Horwich; where you turn your watch back 40 years when entering.