After Young Dave decided to retire to his study with the pearl-handled revolver and bottle of reassuringly expensive Scotch, the runners and riders assembled for the inevitable Tory leadership contest. One participant, whether candidate or kingmaker, would be Michael “Oiky” Gove. Another would be London’s formerly very occasional Mayor Alexander Boris de Pfeffel Johnson. Might the two Men Who Would Be King even run a joint ticket? 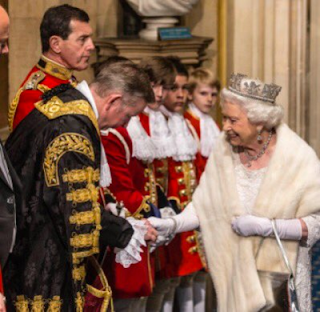 A real man of the people

That was clearly the thought weighing heavily on the mind of Sarah Vine, aka Mrs Gove, on Wednesday morning when she emailed someone - perhaps “Oiky” himself - and somehow managed to send her thoughts to someone who was not the intended recipient. The contents lay bare the selfish, delusional and grasping nature of this appallingly unappealing couple - and that their loyalty is not to their country, or fellow citizens.

Here’s what Ms Vine said: “Very important that we focus now on the individual obstacles and thoroughly overcome them before moving to the next … I really think Michael needs to have a Henry or a Beth with him for this morning’s crucial meetings … One simple message : you MUST have SPECIFIC assurances from Boris OTHERWISE you cannot guarantee your support”. And there was more. 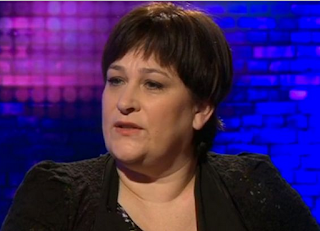 The real power behind the throne

“The details can be worked out later on, but without that you have no leverage … Crucially, the membership will not have the necessary reassurance to back Boris, neither will Dacre/Murdoch, who instinctively dislike Boris but trust your ability enough to support a Boris/Gove ticket … Do not concede any ground. Be your stubborn best … GOOD LUCK.”

The “Henry” and “Beth” are Gove’s advisors Henry Cook and Beth Armstrong.

What to make of this missive? One glaring omission in Ms Vine’s train of thought is that there is no mention of the public, or indeed the EU referendum, the result of which led the Goves to this point. It’s all about Themselves Personally Now. 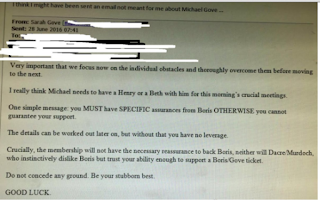 It is also abundantly clear that on Bozza, the Goves are not particularly close friends of him - his inner circle, and indeed his family, call him Alex - and that they do not consider the former Mayor to be trustworthy.

Ms Vine touches, moreover, on the trust issue being a wider problem with Johnson.

But worst, she admits that the people who she and her husband want to impress are not the voters, not the Square Mile, not manufacturing industry, not the burgeoning technology sector, but Rupert Murdoch, an interfering foreigner who holds a US passport and does not have the vote in this country, and the Daily Mail’s legendarily foul mouthed editor Paul Dacre, who represents the Rothermere press, owned by an offshore company.

That is the level to which our democracy has sunk. 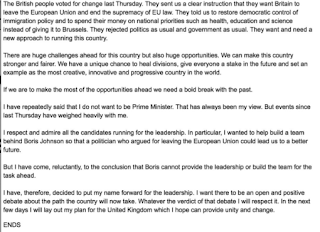 But there is even worse to come: those discussions evidently did not produce a conclusion satisfactory enough for the Goves to go along with a Bozza candidacy. Ridiculous as it may seem to us mere mortals, Michael Gove has decided to disown his fellow Vote Leave leader and run for the Tory leadership himself.

That makes it more than possible that Sarah Vine’s accidental leak of that email was anything but.

It also confirms the suspicion that Bozza has accumulated too much hostility over the years through his dishonesty and lack of principle, and perhaps too many skeletons in the cupboard through his considerable philandering, to get himself into Downing Street without his campaign being derailed by scandal of some sort.

So Gove has told the world “I wanted to help build a team behind Boris Johnson … But I have come, reluctantly, to the conclusion that Boris cannot provide the leadership or build the team for the task ahead … I have, therefore, decided to put my name forward for the leadership”.

To many voters, Michael Gove is not credible as a potential Prime Minister. But in the looking glass world of him and his selfish, grasping wife, the little people out there can go hang. They are irrelevant. The important people are an interfering foreigner and a ranting, swearing, intolerant bully. They are the ones to whom the Goves owe loyalty. Securing their endorsement, they clearly believe, will put them in Downing Street.

Sarah Vine’s email, and her husband’s equally selfish actions, show you all that is wrong, all that is corrupt, all that is unreal about Westminster politics. She never ran for elective office, yet is calling the shots. Murdoch isn’t British, yet he is courted for the power he holds. Dacre is a vile and hypocritical bigot, but those who seek power are obliged to pay homage to him. And this is, for too many people, called normal.

I give you the Goves: two people whose contribution to the British economy has been not unadjacent to Sweet Jack Shit, freeloading their way to the top, their eyes on the main chance and without the first idea what to do when they get it. No change there, then.
Posted by Tim Fenton at 10:29

Good piece Tim, though I'd make two points. First, you absolutely hit the nail on the head regarding Vine and Gove's loyalties in this 'negotiation' with oris - they were concerned only for themselves, not with the public or any matter of principle. That is contemptible.

Second, Sarah Vine's email suggests strongly that she is involved in policy setting and trying to influence her husband. Some of this is inevitable, but I don't remember anyone voting for her. I'm sure that someone can find some choice quotes from her or Gove to the effect that the EU's democratic deficit is what makes it so pernicious.

Sorry, Tim, I stopped reading when I got to "...trust your ability..." referring to Gove. My sides hurt too much.

But actually I hope Gove DOES win the tory leadership election because he'll be an even bigger disaster than the Bullingdon Pig's Head Boy. He and they would be utterly destroyed at the next general election. I have yet to meet anybody who thinks he's a human being, let alone a future prime minister. The dangerous buffoon Johnson is only slightly different. The rest of them are the usual run of the mill thieving tories well down the road to ur-Fascism.

I hope too there is a leadership election in what's left of the Labour Party. Because if Jeremy Corbyn wins by the same margin as last time it will clear the way to get shut of the New Labour gobshites and traitors. Not a moment too soon. If he loses, this country will go back to being a de facto far right one party state.

At present this country is on a path to self destruction prompted by neocons and their paymasters. If people are unwilling to defend social decency fairly won in the post war settlement then they can't complain when the tories come knocking with an acid grin and a profiteering invoice. Enough was enough over thirty years ago.

I'll give this much to the Macgoves. They know how the media works. They can leak something, brazenly refuse to comment on it because 'it's private' then watch as the media talks endlessly about it safe in the knowledge that no one is ever going to call them out for their breathtaking cynicism. The press in Britain is just the worst, it really is.

I am still receiving therapy after bumping into the Gove/Vile(sic) family at Morrisons, Wincanton.

Turning around an aisle, I was confronted by them kissing and canoodling by the fresh chickens, while their Chelsea kite bedecked son was left in charge of the trolley.

It is a sight I am still struggling to unsee.

I had to leave immediately, without getting anything for dinner, opting instead to visit the nearby Lidl and buying a bottle of 40% vodka, in the hope of blanking the vision from my mind.

Just how long are we going to put up with press billionaires running our country and appointing our Prime Ministers?

I hear that the Chief Mouser to No 10 is getting itchy feet. If Ms Gove becomes the consort to the PM there won't be room for two cats @ no 10.

From a Sun source so may not be entirely true. No, let's be honest, I made it up but in true Sun (or Mail come to think of it) style. Apology page 2 sometime in the future.

I saw the email on Twitter this morning and thought it was satire! What a messed-up country this is right now.

Gove has spent much of the last three months claiming that immigrants are to blame for the lack of school places, conveniently he has never been asked which former Secretary of State for Education introduced rules which meant that local authorities were no longer allowed to build any new schools.

The lack of school places has got very little to do with the rise in immigration but everything to do with his disastrous time as Education Secretary.

Think about it, the only reason Murdoch has so much political influence, is because people are willing to cede it to him. People give Murdoch money to read his papers and willingly let his opinions influence them. It's all a win-win situation for Murdoch, aided an abetted by his readership.