Yesterday morning, in a triumphal 0600 hours special edition, the Super Soaraway Currant Bun told its readers “Britain walking to an EU exit … Leave claims win in huge poll … SEE EU LATER!” The Murdoch doggies were jubilant. Their message had prevailed, and once again It Was The Sun Wot Won It. There was even a photo of a cheering crowd of Vote Leave supporters to go with the headlines. 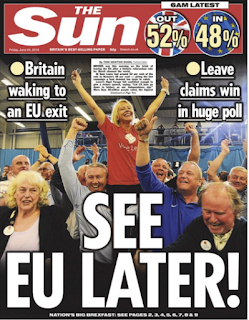 And the photo had to be OK, didn’t it? After all, the TV news bulletins had used video footage showing the same group. Yes, of course it was. I mean, Vote Leave were a mainstream group, right? They were the group fronted by Bozza, and he was a Man Of The People. It was the grouping championed by Michael “Oiky” Gove, Labour MP Gisela Stuart, Priti Patel, and of course Dan, Dan The Oratory Man.

It was far safer to use a photo of Vote Leave supporters than, say, those surrounding Nigel “Thirsty” Farage and his fellow saloon bar propper-uppers at UKIP. That lot attracted some seriously dodgy fringe characters. So Vote Leave it was. Then someone noticed that one of those in the Sun’s front page photo looked familiar. And those thinking that someone looked familiar were not at all happy when they found out why. 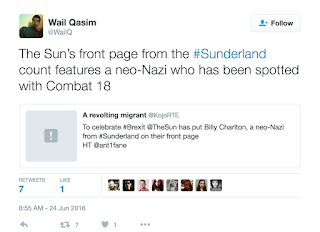 Look just right of centre, and you will see a bloke wearing a blue Nike top. He is the one who looked familiar. His name is Billy Charlton. Yes, he looked so familiar that he was easy to identify. Why would that be? Well, Billy Charlton is a known political activist, and not for the Tories, Labour, the Lib Dems, the Greens, or even UKIP. Billy likes his political activism rather more explicit than those wishy-washy mainstream parties.

No, Billy Charlton is associated with Combat 18. Who they? Well, Combat 18 are “the official armed wing of Blood and Honour”. Their logo derives from the Totenkampf used by the 3rd Panzer Division of the Waffen SS. Their motto is “Whatever it takes, oderint dum metuant, White revolution is the only solution”. Combat 18, let us not drive this round the houses for too long, are a bunch of neo-Nazi thugs. 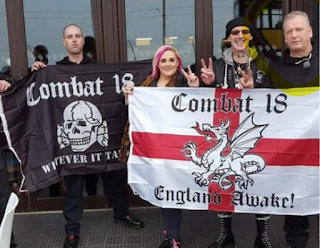 The “18” in the name derives from the initials of Adolf Hitler, A and H being the 1st and 8th letters of the alphabet. The group has been implicated in the deaths of immigrants, non-whites, and, just to show that they aren’t too picky, other Combat 18 members. And it was not too difficult for someone to find an image of Billy Charlton standing behind a Combat 18 banner. There he is, at the right of the photo.

So what has the Sun had to say about that? Well, so far they have said nothing, perhaps hoping that everyone will forget and move on, and in any case, it was on the telly, so if push comes to shove they can always blame the hated BBC. But the Murdoch mafiosi had the time to check out who they were putting on the front page, and it’s clear that they did not - unless they decided it was fine to give space to neo-Nazis.

Will the inmates of the Baby Shard bunker say anything? Don’t hold your breath.
Posted by Tim Fenton at 10:05

True, Tim, it's a small deal......But it's there. It will grow, too, if it remains unchallenged. The history of Germany, Italy and Spain shows how and why.

Nor can you expect the Murdoch-Rothermere axis of evil to challenge it. Not with the Daily Heil archives shouting "Hurrah for the blackshirts!" and the Scum archives of Hillsborough and Orgreave still fresh in the memory.

Nor can you expect other mainstream media to give it more than a passing mention - "The boys will have their over-enthusiastic democratic fun!"

All of it is a measure of just how far right this country has been manoeuvred. Now that we're faced with economic near-isolation how long is it before we start hearing the Dunkirk Spirit and The Few hypocrisy and all the other John Bull bullshit?

Laurence Reese's fine film Nazis: A warning from history shows just how easy it is for a civilised nation to go insane. Anybody who thinks this tiny group of islands is immune from that lethal garbage ought to view Reese's work.

There can be no excuses for anybody. And none at all for Murdoch-Rothermere and their jobsworths, who have already demonstrated their hatred of genuine democracy, fairness and decency. It's enough to make one......shudder.

Remarkably, the Scottish editions of all the tabloids were considerably more restrained, as the reality dawns that the UK may very well shortly be considerably smaller than it is now. Their editors knew fine well that there was never a remote possibility of a "Leave" majority in Scotland or Northern Ireland, but were so in thrall to their proprietors and their English stablemates that they couldn't recommend caution.

Now there is genuine fear that their hysteria for Brexit has ensured the break-up of the UK. a huge proportion of "No" voters in September 14 did so to ensure continued EU membership, and all four main parties are pro-EU, so the prospect of Scotland being in the EU by the time England and Wales pull out is a very real one.

We also now have the spectre of angry people demanding a United Ireland, which does not always end well

I suppose that meeting of Trump and Murdoch makes sense now? Possibly the only way Trump can win is to create a climate of fear from Johnny & Janet Foreigner in the US? Can Fox News get even more xenophobic? Interesting but quite frightening times.