The Murdoch poodles’ campaign against BBC Top Gear shows no sign of abating, despite their failure to have it pulled before airing. Such is the vindictiveness of the inmates of the Baby Shard bunker towards the Corporation for binning their man Jezza for the entirely understandable act of racially abusing and then physically assaulting a producer, something that has proved difficult for Sun hacks to explain away.

Such is the intensity of this particular mardy strop that it has now been extended to attacks on anyone involved with the show, the latest being Danny Baker, whose crime is to be connected with Top Gear and also having a Twitter account. Late last Wednesday he posted this message: “It is stated that I am a writer on Top Gear. I am not. I am just an advisor. You know. Like the CIA in Vietnam”.

Those who have even the most cursory knowledge of the CIA’s involvement in the Vietnam war will know that Baker is joshing, not being entirely serious. But this did not occur to the Murdoch mafiosi, and so in yesterday’s paper readers were told “Danny Baker slammed over Tweet distancing himself from disastrous new Top Gear series … EXCLUSIVE: Move panned as reports claim he earns £1500 a day”. 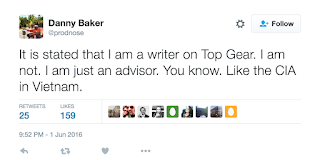 It was “Exclusive” only because nobody else had the brass neck to tell such an obvious whopper. But do go on. “TOP GEAR writer Danny Baker has launched an astonishing bid to distance himself from the BBC show – despite collecting a massive salary to work on it … Danny, 58, who was brought in at the special request of pal Chris Evans, is reportedly being paid £1500 a day to pen scripts for the BBC2 show”.

See? As the Sun hacks don’t have any real inside information on Top Gear, they have to invent a figure for Baker’s possible payment for his work, which by the most fortunate coincidence is an amount far higher than the average Sun reader will get for a whole week’s work - never mind a day. It gets worse: the number of Twitter users who accuse Baker of “appearing to abandon” the show is just THREE. 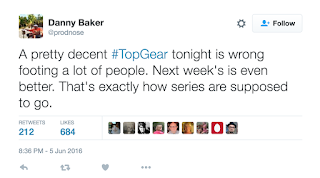 Plus it goes without saying that there the only backup the Sun has for its clumsily confected rubbish is “a well-placed source”. Placed so well that it is already sitting in the Sun newsroom, ready to gently tell whoppers to order. And in any case, Baker also Tweeted this sentiment - “A pretty decent #TopGear tonight is wrong footing a lot of people. Next week's is even better. That's exactly how series are supposed to go” - during yesterday’s edition of the programme. So the Sun claims were wrong.

The Murdoch doggies took a three and a half day old Tweet, made a false assumption, span it out, invented a figure for Baker’s earnings from Top Gear, and even then they not only got it wrong, but were seen to have got it wrong. It is creepy and desperate stuff. But now they’ve started, the campaign must go on. They cannot afford to lose face.

Danny Baker could have some fun with this. After all, Sun hacks will believe anything about Top Gear right now.

[UPDATE 7 June 1300 hours: my thanks to one Zelo Street regular who pointed out that the Sun has, overnight, pulled its article about Danny Baker from its website.

That means that not even the Murdoch doggies are prepared to stand behind the story. And that it's just another pack of lies.

That's something to remember the next time you read the next Sun BBC Top Gear hatchet job. Because there will be plenty more of them]
Posted by Tim Fenton at 16:33

I hope Baker does the Scum over for this.

Not because he's anything more than just another Lahdan chancer physically handy for the "jokes" commissioners. After all, it's a tidy little cabal of mutual back slappers in our ugly capital.

It's because every time someone sticks one on that East End barrow boys house magazine the rest of the country has a little party.

I only come here for the verification game.

Timbo, can you do me one with bottles of Chablis?
Only for me because I'm special.

"is reportedly being paid £1500 a day to pen scripts for the BBC2 show"
But it's true. The S*n reported it.

I wonder why that is, did they yank it?

Guess they are not standing by the "report", quelle surprise.

anyone who follows @prodnose on twitter will know he dished the dirt on the sun the other week after the Hillsborough enquiry,with Danny stating that the suns view on the outcome was probably still one of drunken Liverpool fans stealing the personal belongings of the victims who wer'e strewn about the terrace that day