Another day, another welter of Europhobia from the legendarily foul mouthed Paul Dacre and his obedient doggies at the Daily Mail, as the Vagina Monologue seeks to impose his casual bigotry towards anyone talking foreign - as well as any religion not meeting with his approval - on his readers, whether they like it or not. Such is Dacre’s dislike of Abroad that he has even left the Orlando LGBT nightclub massacre off the front page. 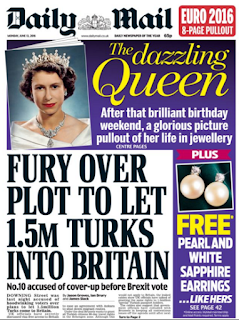 So what is their chosen lead story? As if you need to ask: “Secret plan to open our borders to 1.5m Turks: British diplomats admit it would be a 'risk' but tell ministers the move would be a 'symbolic gesture to Turkey’ … EU plan to give visa-free travel to 75m Turks could lead to UK giving same status to up to 1.5m 'special passport holders’ … EU officials quietly delaying publishing plans until after the UK's EU vote … They don't want to deter Britons from staying in the EU with the proposals” read the headlines.

But, as I pointed out yesterday, this “story”, which initially featured in the Sunday Times, is a crock of crap. What diplomats discuss in cables sent to London is no more than that: these are not Ministers, they are not decision-makers, and there is no plan to let anyone in, nor to “open the floodgates”. The only original element in the Mail story is that the ST’s figure of one million has had another 50% added on to it, to make it look more scary.

Plus the Mail gives houseroom to the serially dishonest Iain Duncan Cough: “In further signs of the increasing bitterness of the campaign, Mr Duncan Smith responded to Mr Cameron's remarks this morning by saying: 'This is a baseless threat. Experts have shown that leaving the EU - and introducing an Australian-style points system - would lead to a higher state pension”. No experts said that at all. Because he’s just making it up.

Daily Mail Comment, the voice of Dacre, or his representative on Earth, piles on the paranoia: “With ten days to go until the referendum, how much are David Cameron and our partners keeping back from voters about the EU’s plans for the future? The question is brought into sharp focus by yesterday’s leaks of British diplomats’ cables, discussing policies not intended to be publicly aired before the vote is safely out of the way”.

There’s more: “The unmistakable aim is to keep the electorate in the dark, so as to avoid frightening the horses before the country makes its decision … What a contemptuous way to treat voters in a mature democracy. And what a clear sign of the EU elite’s fear that if we knew the truth about its plans, we would want nothing to do with them”.

And that’s a most interesting angle, so interesting that it puts Dacre and his hacks in what Spike Milligan would have called A Very Difficult Position. After all, if the Mail’s readers knew that the editor of their paper owned a Scottish estate for which he had been trousering hundreds of thousands in EU farm subsidies - in other words, if they knew the truth about his plans - they too might want nothing to do with them.

Paul Dacre’s glasshouse is even more draughty this morning. No change there, then.
Posted by Tim Fenton at 08:52

I see today's Times is repeating the Turkish story lies published by its Sunday companion.

This from Daily Mail Sport correspondent, Martin Samuel, today:
‘So one final thought. You cannot lead a very powerful and lowest common denominator election campaign, based on demonising immigrants and the very concept of immigration; on making the claim that Britain is somehow different from the vague foreign mass; on telling us that we are not the same, that we are somehow better; that we have nothing in common with people who live across a tiny strip of water; that we should put up walls, restraints, that they are the reason for our failing NHS and myriad social ills.

You cannot do this without also creating a dangerous, divided climate, in which hatred festers. English hooliganism never went away, but it has not been as identifiable and vocal for some time.

Long before the Russians showed the sinister, orchestrated face of the new football violence, drunken English fans were gathering to sing anti-European songs in Marseille’s port.’

Given the state of political campaigning recently that "mature democracy" thing is a bit rich.