As the EU referendum campaign goes into its last two weeks, so the scare stories coming out of the Europhobic part of the Fourth Estate - for which read most of it - are becoming ever more desperate, to the point of inaccuracy and even dishonesty. And there is no finer example of both than the latest attempt to frighten voters from the obedient Murdoch shilling takers at the Super Soaraway Currant Bun. 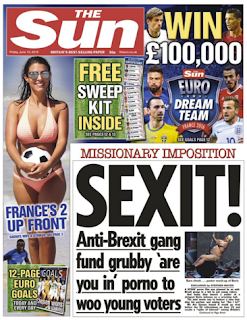 Then there is more invention: “The draft script featured references to Winston Churchill and the Queen [no evidence or citation] … One scene involved a man having sex with a woman and looking at a photo of David Cameron and Angela Merkel [ditto] … But We Are Europe - who are separate from the official Remain group - pulled out after The Sun confronted them over the bad taste stunt [ditto]”.

This is just totally made up, right? Made up right down to smearing popular hate figures for the Out campaign, with “The activists, funded by Lord David Sainsbury and ex-M&S chief Lord Stuart Rose, were to film the brief movie yesterday”. A promotional film, and it was to be cobbled together in one day, with the expectation of it “going viral” before the referendum in less that two weeks’ time? Someone is having a laugh.

There is even a contribution from Vote Leave head man Matthew Elliott, whose respect for Parliament - you remember, Out fans, the Parliament that you all want to be sovereign and supreme - was such that he had to be dragged kicking and screaming to testify before the Treasury select committee. So what we have here is a mixture of lies and invention, propped up by a quote from a gloating hypocrite.

The Sun is shilling for the Out campaign. We know that already, thanks.
Posted by Tim Fenton at 09:35

Personally, I'm looking forwards to a Mexit.
It's when Murdoch finally gets booted out.