Just in case anyone was in any doubt as to where the Murdoch shilling-takers at the Super Soaraway Currant Bun stand on the upcoming EU referendum, one look at today’s front page would have put them right. Under the claim “New Migrants Bombshell”, readers are told “CHECKPOINT CHARLIES … Euro judges ‘open floodgates to illegals’”. Yes, the EU has done something Very Bad Indeed because it means MIGRANTS! 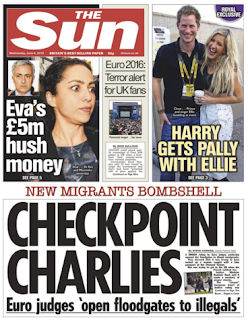 Under the by-line of deputy political editor Steve Hawkes, we read that “A SHOCK ruling by Euro judges yesterday opened the floodgates to illegal immigrants … They decreed that it was wrong to have locked up a woman caught with a fake passport at the Channel Tunnel … She was trying to get to the UK when the French nabbed her … Justice Minister Dominic Raab said it made a mockery of proper checks”.

If only someone calling himself a “Justice Minister” knew the law, eh? But do go on: “The Ghanaian woman, Selina Affum, was held in jail by France after being caught on a coach from Belgium bound for London … The Luxembourg court ruled illegals entering one EU state from another on the Continent cannot be jailed”. Ah, this is very serious for the Sun because it means not just foreigners, but black foreigners!

But the person concerned failed to get into Britain. What is Hawkes problem here? “Pro-Brexit campaigners said it was a green light for the thousands of illegals wanting to get here from France to keep trying … Mr Raab said: ‘This ruling threatens the integrity of our borders … It increases the risks that illegal immigrants will be able to enter the UK because it weakens the ability of EU governments to put in place proper checks”.

Why? There were “proper checks” in place, and she was stopped as a result of them. Nothing has been done to stop those checks taking place. All that has been done is that her being locked up has been ruled improper. Her being freed from detention does not give her, or anyone else, the “green light” to enter Britain, or any other country. One might have thought that a “Justice Minister” could figure that one out.

It gets worse: Britain is not a signatory to the Schengen area, and so no-one can just walk in - unless they have a valid passport, of course. So when the Sun’s Twitter feed tells “European judges ‘open the floodgates’ to illegal immigrants after passport ruling”, they have their pants well and truly on fire. Nothing has changed in the way Britain deals with those wanting to come here. The story is a complete con.

The Sun even admits that a 10 Downing Street spokesman told them Britain was exempt from the directive being considered by those “Euro judges”. And the Guardian’s Alan Travis has confirmed “RE today's Sun splash, Checkpoint Charlies, - Home Office says UK opted out [of the] EU returns directive so ruling will have no legal impact here”.

This “story” is a pack of lies from start to finish. So it’s worrying that a Government minister is willing to be a party to it. But crawling to the Murdoch mafiosi? No surprise there.
Posted by Tim Fenton at 13:40

It gets even worse.
The court simply reiterated a previous ruling that simply by entering a Schengen state illegally....and any non EU national asylum seeker is unlikely to have proper documentation.... cannot be an imprisonable offence per se. But the suggestion that the receiving country under the provisions of the Returns Directive cannot detain the non EU national is plain wrong.
These are the operative paragraphs.
''The Return Directive precludes any legislation of a Member State which lays down a sentence of imprisonment for an illegal stay of a national of a non-EU country in respect of whom the return procedure established by that directive has not yet been completed. According to that case-law, the directive does, however, permit such nationals to be imprisoned where they have previously been subject to that procedure and continue to stay illegally on the territory of the
Member State with no justified ground.
Nor does the directive preclude nationals of a non-EU country being placed in administrative detention with a view to determining whether or not their stay is legal."
http://curia.europa.eu/jcms/upload/docs/application/pdf/2016-06/cp160058en.pdf