The week is not starting well for those advocating for Britain to leave the EU: after the pause in campaigning following the brutal murder of Labour MP Jo Cox, when campaigning resumed yesterday Young Dave put in a performance on a BBC Question Time special that upset the Out campaign - because he hardly put a foot wrong. And then came the Orbán endorsement and the Warsi defection. 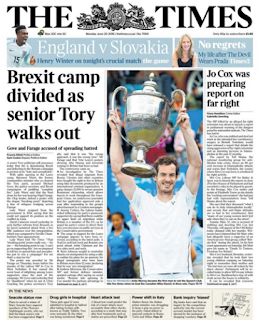 Hungarian Prime Minister Viktor Orbán and his Government in Budapest took out a full page advert in today’s Daily Mail, which read simply “The decision is yours, but I would like you to know that HUNGARY IS PROUD TO STAND WITH YOU as a member of the European Union”. Douglas “Kamikaze” Carswell, UKIP’s sole representative at Westminster, promptly smeared Orbán as an extremist.

“Quite something that the extremist Jobbik party in Hungary wants us to Remain. You want political union w/ them?” he Tweeted. Orbán represents the mainstream conservative Fidesz party, but hey ho. There was, in any case, worse to come as the Times headlined on Sayeeda Warsi’s defection from Vote Leave to the Remain campaign, citing the stoking up of “hate and xenophobia”. The blowback was swift in coming. 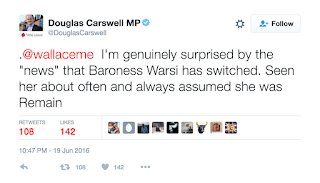 What form would this take? Simples. The Outers would pretend that Warsi had never actually been on their team. Carswell was again in the vanguard of this move, telling “I'm genuinely surprised by the ‘news’ that Baroness Warsi has switched. Seen her about often and always assumed she was Remain”. Gentle, firm … and dishonest. 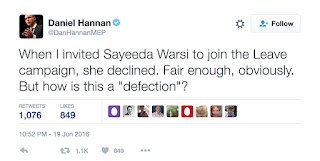 Who would like to back him up? Step forward Dan, Dan The Oratory Man to let anyone who was listening know “When I invited Sayeeda Warsi to join the Leave campaign, she declined. Fair enough, obviously. But how is this a ‘defection’?” Er hello Dan, YOU SHARED A PLATFORM WITH HER LAST AUGUST (h/t Political Scrapbook).

The inmates of the Baby Shard bunker also chipped in, not least Sun editor Tony Gallagher, who observed “I had no idea Baroness Warsi was part of Leave campaign.  None at all”. But then, he knows bugger all about what’s happening at his own paper, so that’s not such a surprise. 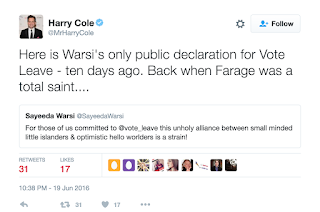 His alleged “Westminster Correspondent”, Master Harry Cole, chipped in with “Here is Warsi's only public declaration for Vote Leave - ten days ago. Back when Farage was a total saint”. Two things here. One, that excludes the time before the campaign was known as Vote Leave (the Scrapbook post notes this), and two, Nigel “Thirsty” Farage has nothing to do with Vote Leave, so Cole is once again talking well, but lying badly.

Would anyone else care to make themselves look foolish? As if you need to ask. Right on cue has come (thankfully) former Tory MP Louise Mensch to chirp “For shame. Sayeeda Warsi has NEVER been Leave. No campaigning nothing”. But she was wrong as well.

Sayeeda Warsi’s move will hurt the Outers. She’s the kind of person they need to get on board to prove that they’re not just trying to frighten the electorate about lots of Brown Muslims coming from the Middle East because of the EU. The reason they are all trying to play down her defection shows that panic is starting to set in.
Posted by Tim Fenton at 13:46

Even by the standards of right wing politicians I don't think I've ever seen a gang more prone to pratfalls than the mob at Leave.

"Leave" has never heard of Baroness Warsi. Surprise.
Have you seen a picture of her? She's a WOMAN (gasp). And she's NOT WHITE. (bigger gasp).
Of course Nigel, Michael and Toby and the rest never noticed her at the Leave campaign. They probably thought she was there to sweep the floors, make the tea and tidy up after them.
Not like a real supporter of Exit.